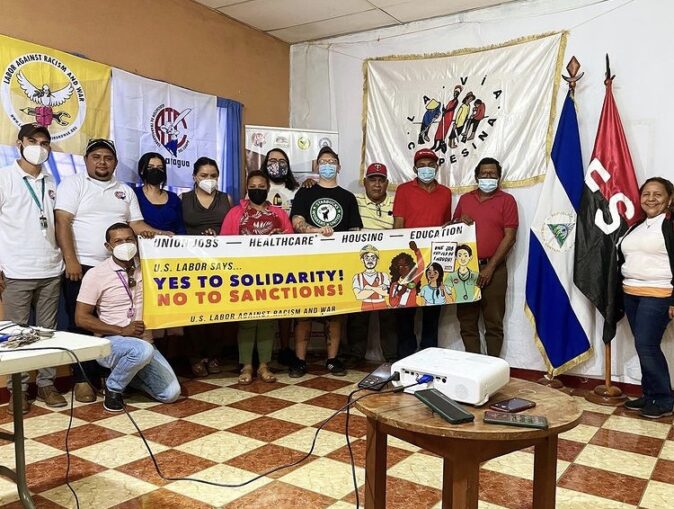 Delegates from Labor Against Racism and War and Workers World Party with members of the ATC (Asociación de Trabajadores del Campo), Managua.

Based on a talk by the author at a Jan. 30 webinar, hosted by the Alliance for Global Justice, entitled “Nicaragua: What We Saw; What’s Next.” Red traveled with a delegation from the U.S. to attend the Jan. 10 inauguration of Nicaragua’s elected leaders.

I have to be honest. Before I came to Nicaragua for the first time on this delegation, I knew very little about the country and had just basic information about its history. It’s one thing to be able to read about a revolution and another to be able to see it unfolding with your own eyes.

I could see the progress which has been made in Nicaragua since the revolution: the improvement of education and health care; expansion of roads and water infrastructure; and the achievement of near total food self-sufficiency. These are great achievements that can’t be understated, not only compared to prerevolutionary Nicaragua but when compared to the U.S.

But Nicaragua hasn’t built up its infrastructure with wealth and resources plundered from around the world like the U.S. has done. The people have done it through cooperation. The country has been largely self-sufficient. The Nicaraguans have done this, despite the crushing pressure of U.S. sanctions. Nicaragua’s Sandinista revolution is evidence that another way forward is possible.

The biggest shock of my trip to Nicaragua was seeing a country where the government has the enthusiastic support of the people. This is unheard of in the U.S. The Sandinista government keeps the best interests of the people at the forefront of everything that happens.

We saw people who were excited about electing a president that they actually have faith in and believe in. Nicaraguans elect their leaders through a process that’s far more democratic and transparent by leaps and bounds than any U.S. election. When presidential elections happen in the U.S., it’s the opposite. People vote against a candidate they hate, more than they vote for one they actually like.

It was so refreshing to see a country where the revolutionary government and the unions and other worker organizations work hand in hand, rather than against each other.

I am a Starbucks worker in Buffalo, New York, and my store just recently became the second unionized store in the U.S. This was something we had to fight for tooth and nail, and we definitely didn’t have any help from our government. Workers in the U.S. never do. The best we get on a good day is the National Labor Relations Board dragging its feet every step of the way. Most of the time the NLRB is oppositional to our organizing.

In Nicaragua, I got to see how the unions and labor organizations like the ATC (Rural Workers Association) are taking an active role in organizing workers and training the next generation of leaders. I learned how women’s liberation is a focus of the revolution and the labor movement.

We were able to visit a collective farm run entirely by women. We learned about how they struggled against both the U.S.-backed Somoza dictatorship and internally in their communities. Now they have made much progress towards eliminating misogyny and have shown their communities that women are leaders.

I learned how Nicaragua has made a point of bridging the gap with different areas, like the Caribbean coast, that have been less developed and cut off from the rest of the country. The government is building highways and other infrastructure, as well as providing teachers and food for students.

And the government is giving about 30% of Nicaragua’s land back to Indigenous people. This sets a fantastic example that people in settler-colonial countries like the U.S. should pay close attention to.

I also learned how excited Nicaraguans are to have a renewed relationship with the People’s Republic of China. Nicaraguans view this as an opportunity to finally be able to play a larger part in a multipolar world. They can forge their own path and are not being forced to submit to U.S. imperialism and its affiliated global financial institutions. Nicaragua is looking to cooperate with other countries on the basis of mutual benefit, unlike the U.S., and resistance to imperialism.

I can’t stress enough how important delegations like this are, especially for those who haven’t been to Nicaragua. If you don’t know what’s happening there or the country’s history, you need to read about it, and, most importantly, fight against U.S. imperialism as hard as you can. We need to defend countries that the U.S. targets, whether it’s Nicaragua, China, Cuba, Venezuela, Iran or Russia.

We need to understand that the working class is worldwide. We might be separated by borders and distance, but working-class and oppressed people in Nicaragua have achieved victories that need to be defended by workers from around the world, especially those in the U.S.

We need to take all this knowledge and bring it back to our communities and share the truth. Tell your friends, family and co-workers about the sanctions. Tell them about the U.S./CIA-funded Contras.

Tell them about Ben Linder. (The 27-year-old engineer from Portland, Oregon, was murdered by Contras, along with Nicaraguans Sergio Hernandez and Pablo Rosales, while helping to build a hydroelectric dam in northern Nicaragua in 1987.)

Nicaragua is building something beautiful. The U.S. imperialist media will never show us that. So it’s up to us to tell the real story.

U.S.-imposed sanctions are a weapon of war, and are used to undermine democracy and make people suffer. Nicaragua’s President Daniel Ortega is not a tyrant. These elections are not fake. The FSLN (Sandinista National Liberation Front) is a popular government that the people believe in. They will fight for self-determination against imperialism and defend their progress in building socialism. We here must do the same.