A major strike by concrete mixer drivers and cement plant workers against cement company bosses has shut down much of Seattle’s $23 billion construction industry. The workers are members of Teamsters Local 174. 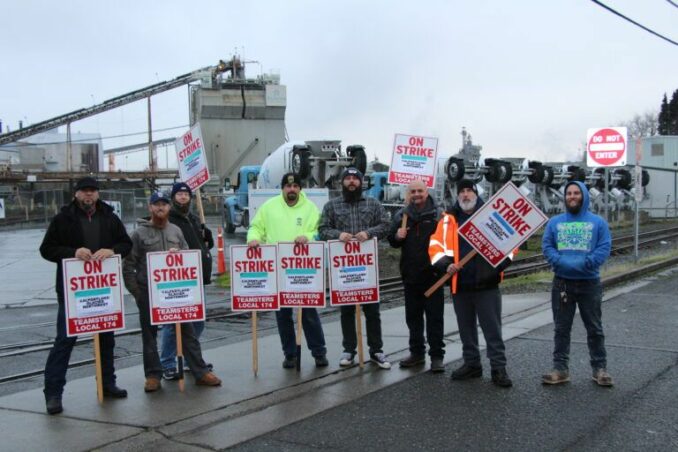 They are striking against wages that don’t match up with the high cost of housing in the area and against unfair labor practices by the bosses. The workers are on the seventh week of their strike. The strike started with 34 people on Nov. 19 and spread rapidly. The workers have been without a contract with the stonewalling bosses since July 31.

Better pay is an issue for the cement workers, as with other striking construction unions striking in Seattle. “We’re building a city we literally can’t afford to live in,” said one striker. Low wages and lack of affordable housing are issues the construction workers share with the anti-gentrification campaigns of the Black community, Black Lives Matter and the working class in general. (The Nation, Jan. 21)

“These giant multinational construction companies are demanding that workers accept a package of wages, health care and retirement that would be a decrease in compensation over three years, when you take inflation into account,” said Rick Hicks, Secretary-Treasurer of Teamsters Local 174. Amazon and Starbucks are just two of the massive corporations that have physical headquarters in Seattle and are directly impacted by the construction workers withholding their labor from building projects. (Construction Dive, Jan. 11)

The work that cement truck drivers do provides the foundation for every big construction project in the region. The difficult work requires long hours and different start times every day. “We live in those trucks, day in and day out,” one worker said. (The Guardian, Jan. 26)

Since concrete mix workers and drivers provide the foundations for all buildings, nothing gets built without those workers. In Seattle, hundreds of building projects have been forced to shut down, while the bosses moan about their lost profits. Thousands of construction workers have been laid off, but many have expressed sympathy with the striking Teamsters.

Some workers call it a general strike because of its effect on vital industry! Some suspect the bosses are trying to bust the Seattle construction unions that have had several strikes recently during a construction boom.

The union launched its industrywide strike at six big companies: Gary Merlino Construction, Stoneway Concrete, Cadman, CalPortland, Salmon Bay Sand & Gravel, and Lehigh Cement. When the striking Teamsters extended their picket line to Lehigh Cement Company — a huge plant at the Port of Everett — this action shut down all operations there, with members of the International Longshore and Warehouse Union honoring the Teamsters picket line.

The bosses’ arrogance and refusal to negotiate has been met with the strikers’ escalation. (teamsters174.org)

The writer is a member of Teamsters Local 174, retired.