Jan. 23 — Dr. Daymara Pérez is a Cuban doctor who has worked in Haiti since 2019, currently at the Notre Dame Hospital in Petit-Goâve, south of Port-au-Prince. Ten days ago she was on a public bus traveling through the Martissant neighborhood, on the southern edge of Port-au-Prince, when the bus was stopped by an armed group that grabbed her off the bus. 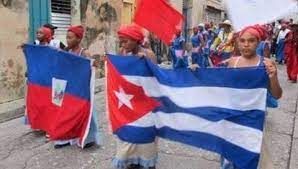 The kidnappers demanded a ransom of $1 million, which was negotiated down to $100,000, of which $10,000 was evidently paid. The Cuban government, through its Embassy in Haiti, confirmed that Dr. Pérez was released the morning of Jan. 23, in good health.

Dr. Pérez initially came to Haiti as part of the Henry Reeve Medical Brigade, composed of almost 400 Cuban medical workers, which has been providing support in Haiti for 22 years. Brigade members have concentrated their efforts mostly in remote, impoverished rural communities, where they supply a very significant amount of medical care and public health information.

According to Vant Bèf, a local web news service, people from Petit-Goâve took to the streets, demanding freedom for Dr. Pérez. They set up a barricade of burning tires and large rocks. On National Route 2 they blocked the road with a large semitrailer. In particular, young people from the “Bò Lopital” base condemned the kidnapping and expressed solidarity with Cuban doctors who provide assistance to the Haitian people.

As protesters also denounced the high price of food, banks and stores pulled down their security gates, and mass transit stopped running. Protesters warned: “Crime cannot reign in our country. If Pérez is not freed, we will intensify our demonstration.” (tinyurl.com/2p9xumxs)

Some U.S. press reported that Cuba was pulling a large number of doctors out of Haiti because of the security situation. Dr. Lauré Adrien, General Director of Haiti Ministry of Public Health and Population, denied these reports, saying that only 28 Cuban doctors — some going on vacation, some having finished their tour — were on a charter flight from Port-au-Prince to Havana.