The writer is currently incarcerated at Pennsylvania’s SCI Coal Township.

The Families Against Mandatory Minimum (FAMM) report points out the “irrational and ineffective” sentencing laws in Pennsylvania, which send too many people to prison for far longer than necessary. Sentencing laws that severely limit pathways to relief from excessive and unending punishments make the problem even worse. Pennsylvania has thousands of aging and sick people, whose continued incarceration serves absolutely no purpose. 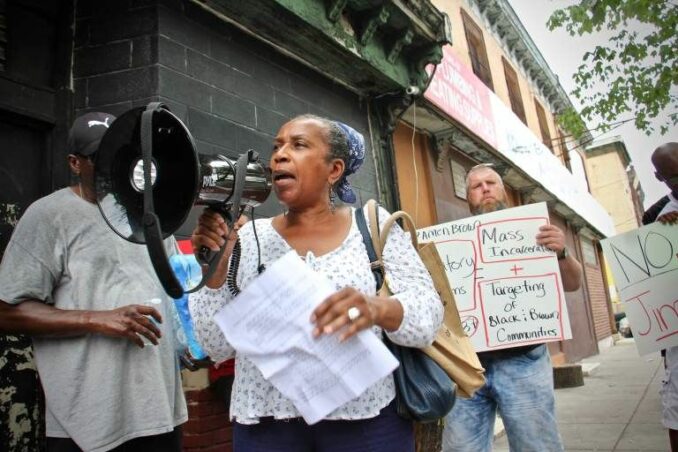 Patricia Vickers, whose son was sentenced to life in prison when he was 17, speaks out against mandatory minimum sentences at Philadelphia rally, July 2021.

The state’s overreliance on harsh punishments, combined with a near elimination of any meaningful mechanisms for reviewing these sentences, has contributed to a prison population that has exploded by nearly 300% since the early 1980s. Although Pennsylvania started to reduce its prison population over the last decade, the drastic increase in the number of people serving long and life without parole — LWOP — sentences continues.

Pennsylvania’s punitive sentencing practices offer no discernible benefit to the public. They create significant negative consequences and only add to the preexisting harm done to citizens. While unfairly and unnecessarily depriving people of freedom, Pennsylvania’s sentencing approach wastes more taxpayers’ money, separates families, exacerbates racial disparities and deprives people who have been incarcerated for their mistakes of nearly any opportunity for redemption or mercy.

FAMM has developed the Second Chance Agenda as one solution to expand opportunities for second chances. To address this crisis, Pennsylvania must reform its sentencing laws to allow for individualized and appropriate punishments and create more opportunities to review sentences and to provide incarcerated people with a path toward a second chance.

In Pennsylvania, FAMM suggests that this can be accomplished in several ways. Start with ending life without parole, and repeal the mandatory life sentence statutes for first and second degree murder. Allow opportunities for parole for people with these convictions, and make these reforms retroactive. All people can change and mature, and laws should reflect that. Pennsylvania judges should have the discretion to impose individualized, appropriate sentences and review unjust sentences.

Allow medical and elderly release, and expand compassionate release. More than 20% of Pennsylvania’s prison population is over 50, and many of these people have chronic health conditions. Maintaining such an enormous population of aging and ill people in prison is expensive, unnecessary and unjust.

Pennsylvania should create mechanisms to release people in prison based on age and or medical necessity; 70% of lifers were under age 30 at the time of their conviction, which means that Pennsylvania taxpayers could potentially be paying to incarcerate them for 50 years or more, an extraordinary possibility.

For example, if someone enters prison at age 20, moves to a skilled or personal care (hospice) unit at age 55 and lives to be age 75, the lifetime costs to incarcerate just that one person would be approximately $5.7 million, plus inflation based on the estimated age at the time of the crime.

Clemency must be expanded. In Pennsylvania, clemency is the only hope for relief for people serving long or life sentences. Between 1971 and 1994, Pennsylvania commuted the life sentences of 285 people, but that number dropped by more than 90% over the following two decades. Commutations are a necessary mechanism to address injustices and support second chances, and their use should be substantially expanded.

Prisoners are encouraged to strategize, mobilize, organize, synergize and energize family members, friends, contacts, advocates, loved ones and supporters on the outside, [who] must get involved on the solutions spelled out in the Second Chance agenda. For more information, go to the FAMM websites: [email protected]; www.fam.org; tel: (202) 822-6700; address: FAMM, 1100 H Street NW, Ste. 1000, Washington, D.C., 20005.