Over two long January nights — to avoid disrupting traffic and endangering pedestrians — an abhorrent statue of Theodore Roosevelt in New York City was finally dismantled Jan. 20 and taken away to storage. 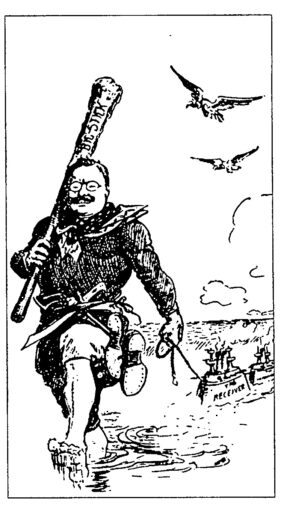 A statue of President Teddy Roosevelt in his role as U.S. imperialist enforcer came down in New York City.

The struggle to remove this presidential statue from a prominent position in the city began in the 1970s and was strengthened by recent struggles throughout the U.S. to remove Confederate statues and memorials.

Roosevelt’s statue had greeted tens of millions of visitors to the American Museum of Natural History ever since being unveiled in 1940. The statue was first conceived in 1925, as a memorial to the 26th president of the United States and 33rd governor of New York. Roosevelt was also head of the New York City police force, a warrior in the Spanish American War that confirmed the United States as a rising imperialist power and a firm proponent of eugenics and white supremacy.

The deeply derogatory statue elevated Roosevelt on horseback far above a Native American man and a person of African descent. As Holland Carter, a New York Times critic, put it, “No matter how you gloss it, it is quite literally an emblem of white-man-on-top.” (Jan. 12, 2018)

Roosevelt, member of New York’s old-money ruling class, was a strong proponent of the discredited pseudoscience of eugenics, adopted into U.S. law and policy as a mechanism of “birth control” to limit childbearing in people deemed “undesirable” by the capitalist power structure of the early 20th century U.S.

In a 1913 letter, Roosevelt clearly supported forced sterilization, a brutal tool of eugenicists, saying: “Society has no business to permit degenerates to reproduce their kind.” Roosevelt did not specify there the criteria for whom he considered a “degenerate” — but the practice of eugenics clearly targeted people of color, immigrants, disabled people, poor people and anyone categorized as undesirable under a white-supremacist, ableist, homophobic world view.

When Roosevelt became president in September 1901, after William McKinney was assassinated, he immediately began strengthening U.S. imperialism. According to Workers World Party founder Vince Copeland in his “Market Elections,” Roosevelt’s aggressive steps included “enforcing the new gunboat policy, enlarging the navy, intervening against the Boxer Rebellion in China, carrying out the bloody counterrevolution in the Philippines, consolidating U.S. gains in Cuba and Puerto Rico and plotting a phony revolution in Colombia that broke off Panama and gave it to the U.S. to build the canal.”

The domestic reforms for which Roosevelt is usually lauded, such as creating a system of national parks, were mainly aimed at promoting domestic stability to avoid any opposition to U.S. foreign adventures. Yet the national parks themselves were created by forcefully removing their original inhabitants; for example, 26 Indigenous communities lived on the sacred lands that were stolen to create Yellowstone National Park. (tinyurl.com/2r9ybabd) And the Miwok community continues to fight to return to Ahwahnee Valley, Yosemite Valley.