Thousands gathered in Managua’s Revolution Square to witness the inauguration of Daniel Ortega and Rosario María Murillo as Nicaragua’s president and vice president, respectively, on Jan. 10. In attendance were officials and representatives from nearly 50 countries and organizations. Most notably in attendance were Presidents Miguel Díaz-Canel of Cuba and Nicolás Maduro Moros of Venezuela, as well as the President of China’s National Assembly, Cao Jianming. 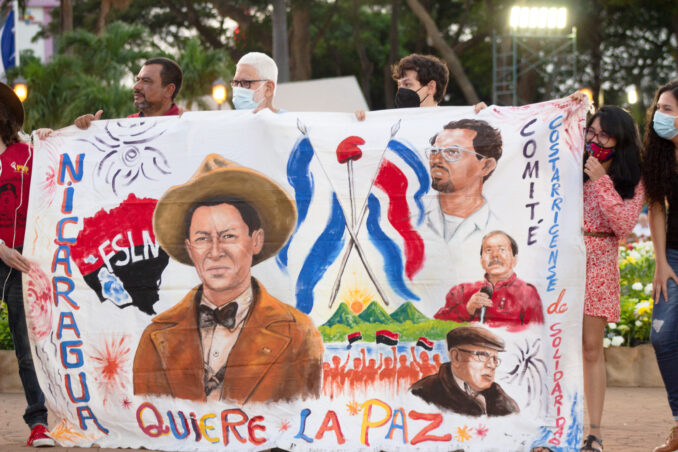 Members of the Popular Vanguard Party of Costa Rica at the inauguration of Daniel Ortega.

Notably not in attendance was any official from the U.S. Biden regime. Instead, the U.S. was represented by solidarity and peace activist, Brian Wilson; author and Professor of Human Rights, Daniel Kovalik; Executive Editor of Black Agenda Report, Margaret Kimberly; and Luci Murphy of the Claudia Jones School of Political Education. After the official proceedings and swearing in, President Ortega delivered a 30-minute speech that began with the swearing in of all the Nicaraguan people as President and defenders of the homeland and revolution.

Ortega announced that Nicaragua would be joining China’s Belt and Road Initiative (BRI). This announcement comes just one month after Nicaragua announced the end of diplomatic ties with the Republic of China (Taiwan) and the recognition and return to diplomacy with the People’s Republic of China. Since Ortega’s speech, it has been revealed that Nicaragua and China signed a Memorandum of Understanding regarding the BRI, making Nicaragua the latest of well over 100 nations to sign onto the global plan for economic development and cooperation.

Another important instance of international cooperation highlighted was the new agreement between Nicaragua and Honduras, regarding maritime boundaries and access to the Gulf of Fonseca. Ortega also touched on the importance of international groups like ALBA (Bolivarian Alliance for the Peoples of Our America) and CELAC (Community of Latin American and Caribbean States) for the cooperation and integration of the region.

While China and Nicaragua’s neighbors offer Nicaragua cooperation and mutual respect, the U.S. and its EU cronies offer threats and intimidation in the form of sanctions. Just hours before the beginning of Monday’s inauguration ceremony was set to take place, Washington and Brussels announced new unilateral coercive measures (aka sanctions) against Nicaragua.

The new sanctions target over 100 individuals and several companies in Nicaragua. President Ortega took time to recognize one particular target of the sanctions — Brenda Rocha, the President of the Supreme Electoral Council. Rocha lost her right arm when she was just 15 years old after being wounded in an attack carried out by the U.S.-backed Contras in the 1980s.

President Ortega brought to the fore the sheer hypocrisy of a country such as the U.S. to impose sanctions on another country in the name of “human rights.” Where were the human rights for Brenda Rocha, when the U.S.-backed Contras killed 50,000 Nicaraguans? Where are the human rights for the Nicaraguan people, when the U.S. refuses to pay the millions of dollars in reparations owed as determined by the International Court of Justice in 1986 in the “Case concerning military and paramilitary activities in and against Nicaragua.” (tinyurl.com/murbujt5)

The U.S. accuses Ortega and the Sandinista National Liberation Front (FSLN) government of “authoritarianism” for the detention of corrupt politicians and individuals involved in the 2018 coup attempt, while the same hypocritical U.S. government is incapable of containing each and every growing political crisis; take for example the imprisonment of 700 Trumpites for their involvement in the Jan. 6 U.S. Capitol insurrection.

The U.S. says Nicaragua is undemocratic; while at the same time, it orchestrates coups against nations around the globe, imposes illegal sanctions and blockades on countries like Nicaragua, Cuba and Venezuela, and even goes so far as attempting to assassinate heads of state as they tried to do with President Maduro in 2018.

The resounding reelection of Daniel Ortega shows that the Nicaraguan people are resolutely behind the revolutionary government of the FSLN. While the U.S. and EU imperialists bully, attack and harass nations they perceive to be weaker, their victims turn to each other for support and cooperation.

More and more countries are abandoning pro-imperialist organizations like the Organization of American States and are instead joining international groups dedicated to mutual respect, cooperation, development and sovereignty. The oppressed people and nations of the world “are no longer afraid,” as President Ortega declared.

The writer is one of the U.S. delegates who attended the Ortega inauguration.