In 1966, one of the first transgender-led rebellions occurred in the Tenderloin neighborhood of San Francisco. The Compton’s Cafeteria Riot served as the prelude to the founding of the modern queer movement. 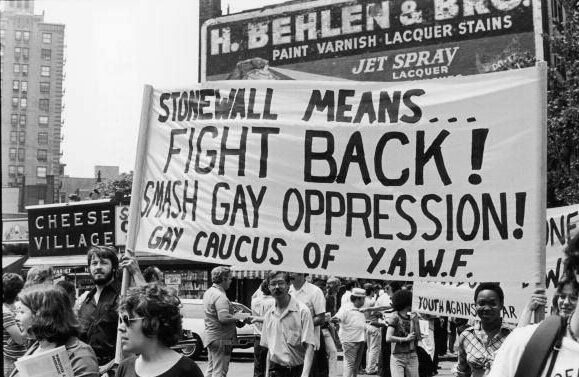 Three years later, on June 28, 1969, there was another rebellion — at New York City’s Stonewall Inn.

The New York Police Department’s morals squad hadn’t gotten its customary bribe to lay off of this gathering place for LGBTQ+ people and raided the bar. Cops forced their way in and attacked everyone they saw. Gay men, lesbians, transgender people (then sometimes called “transvestites”) and cisgender heterosexual leftist radicals were in the bar and surrounding area and fought with all their might against the oppressive police apparatus. (For a detailed account of the rebellion, see Leslie Feinberg, “Lavender and Red,” parts 63-71, workers.org/books2016/.)

The rebellious queers displayed a bravery not expected by the straight world of the time and, over the course of that night, more and more people came to fight the cops, some taking direct blows from club-wielding cops, yet never surrendering.

Two transgender women, Black trans woman Marsha P. Johnson — she said the P stood for “Pay It No Mind” — and Latinx trans woman Sylvia Rivera were among the leading comrades in the rebellion, whose leadership was primarily people of color. (For more: “Street Transvestite Action Revolutionaries: Survival, Revolt and Queer Antagonist Struggle,” tinyurl.com/3wbtuxs9)

The police, overconfident in their abilities to terrorize queer and oppressed people, were pushed back! Not just by the people in the bar, but by people who gathered from the streets to fight back. Radical cishet allies came out to run support. Homeless people, some straight, came to support also.

Queer people celebrated the defeat of the police, as Stonewall served as the first Pride event. Unfortunately, the Mattachine Society — which had once been a radical left, gay group — defended the status quo, actually joining police efforts to stop the protests. (“Lavender and Red,” part 70)

The most oppressed people continued to protest for days, while more privileged queer people downplayed the fightback of Stonewall and looked down upon the rebellion.

In 1970, the radical group STAR — Street Transvestite Action Revolutionaries — was born out of an occupation at New York University. From the statement marking STAR’s founding came its key principle: “If you want gay power, then you’re going to have to fight for it. And you’re going to have to fight until you win.” (“Street Transvestite Action Revolutionaries,” page 18)

STAR was not specifically a Marxist group, but it’s accurate to say it was a radical socialist and revolutionary grouping, in action if not in name. STAR activists housed and fed queer kids and transgender kids who had nothing and nobody else to rely upon.

Marsha P. Johnson saw the necessity to connect the struggles of all oppressed people. An important statement from her was: “History isn’t something you look back at and say it was inevitable; it happens because people make decisions that are sometimes very impulsive and of the moment, but those moments are cumulative realities.” (tinyurl.com/mr2ncw73)

Sylvia Rivera saw the need for the struggle against racist oppression and for the trans struggle, women’s struggle and gay struggle to be combined: “We were all involved in different struggles, including myself and many other transgender people. But in these struggles, in the Civil Rights movement, in the war movement, in the women’s movement, we were still outcasts. The only reason they tolerated the transgender community in some of these movements was because we were gung ho; we were frontliners. We didn’t take no shit from nobody.” (“Street Transvestite Action Revolutionaries,” page 32)

The special political aspect of STAR was that it was aligned with groups like the Black Panther Party and the Young Lords Party, two Marxist-Leninist groups tied to Black and Puerto Rican liberation. (“Lavender and Red,” part 71)

In fact, Black Panther Huey P. Newton spoke of the need of queer people’s liberation. He said, “We know that homosexuality is a fact that exists, and we must understand it in its purest form: that is, a person should have the freedom to use his body in whatever way he wants.” (tinyurl.com/237yvbcx)

Newton was correct in his analysis: Queer people need freedom, and queer liberation must be part of other forms of liberation.

Huey P. Newton was not the only Marxist-Leninist to see the necessity of queer liberation. One of the founders of Workers World Party, chief theoretician and chairperson Sam Marcy took up the defense of drag queens and transgender people as having existed even before capitalism took hold. He defended queer members of Workers World, when others mocked them. He truly cared for the queer members of the proletariat.

WWP’s youth wing during the Vietnam War — Youth Against War and Fascism — also took up the question of queer people. YAWF had a gay and lesbian caucus founded in 1971 that would eventually evolve and become the LGBTQ+ caucus of the WWP. (“Lavender and Red,” part 80)

Marcy himself, always on the cutting edge, here using the language of the earlier era, said: “Our party, which bases itself on Marxism-Leninism, looks to the early model of the Soviet Union as the embodiment of what our own political position should be in relation to the struggle of gay people. Our first, most elementary and fundamental duty, as well as objective on this question, is to completely eliminate and abolish all forms of persecution and oppression of gay people. It must also fight against all ideological, political and social manifestations of gay oppression, which may be reflected in our own ranks.” (“Lavender and Red,” part 80)

In the U.S. communist movement, only Workers World Party — from its time as a tendency within the Socialist Workers Party to its foundation as an independent Marxist-Leninist party in 1959 — fully embraced queerness.

Unfortunately, the pro-queer stance of Workers World Party was not the norm in the decade after the Stonewall Rebellion within the U.S. communist movement. Left tendencies were still adhering to the Stalinist deviation from Leninism of treating queerness as a form of bourgeois decadence in the age of decaying capitalism, like the 1974 pronouncement on LGBTQ+ identity and life as “. . . an individual response to the intensification of the contradictions brought about by decaying imperialism . . . a response to the contradiction between men and women which is rooted in male-supremacist institutions and male-chauvinist ideology.” (tinyurl.com/4hc3kedh)

The attitude of much of the U.S. communist movement in the decade after the Stonewall Rebellion could be summed up in this reactionary statement: “Homosexuality is a form of social sickness, a form of social perversion. It is a form of bourgeois ideology, which appeals especially to the petty bourgeoisie because of its appearance as sexual freedom.” (Workers Viewpoint Organization, tinyurl.com/3jfx8762)

To combat this theoretical and oppressive error within U.S. communist currents, a Workers World Party comrade, Bob McCubbin, worked with founding members Vince Copeland, Dorothy Ballan and other members to formulate a Marxist analysis of what was then called the “gay question.” After collective research and discussion of the history and present oppression of queer people, this work resulted in the 1976 book “The Gay Question: A Marxist Appraisal,” later reissued as “The Roots of Gay and Lesbian Oppression: A Marxist View.”

From 1969-1979 and beyond, Workers World Party’s stance on queer people has been the same: We are members of the proletariat; we are oppressed; and we are revolutionary.