This lightly edited excerpt is from part 105 of Leslie Feinberg’s “Lavender and Red” series on the interconnections between LGBTQ+ lives and socialism. The 120-part series appeared in Workers World from 2004-2008. The sections on Cuba are available in “Rainbow Solidarity in Defense of Cuba,” available in free PDF download at workers.org/book. 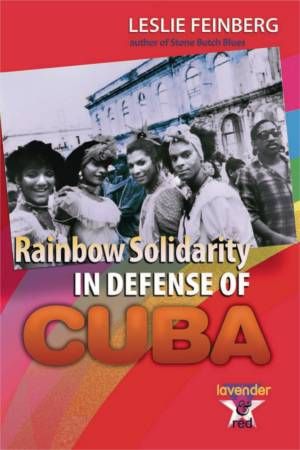 ​​“Butterflies on the Scaffold” (“Mariposas en el andamio”), a 1996 documentary, offered a profoundly thoughtful and moving account of how in the 1970s, Cuban women construction workers literally made room for cross-dressing performance art in the workers’ cafeterias in their neighborhood on the outskirts of Havana, called La Güinera.

The word “butterfly” (“mariposa”) refers to male-bodied Cubans whose femininity is either a part or the whole of their gender expression.

The film was directed by Margaret Gilpin and Luis Felipe Bernaza. Gilpin reported that the preliminary cut had to be shown 11 times at the Havana Film Festival in December 1995 to accommodate the crowds.

“Butterflies on the Scaffold” came out at the same time that a contingent of gay transgender Cubans were asked to lead the massive May Day march in Havana that year. Two U.S. queer-focused activist delegations were invited to join them in the procession — one from Bay Area Queers for Cuba, the other from New York’s Center for Cuban Studies.

For 10 to 15 years after the 1959 revolution, La Güinera had remained undeveloped. Then, documentary footage explained: “Squatters came from the provinces and formed an association. They said, we’ll build your house today and mine tomorrow.” Women made up 70% of the construction brigades.

‘We saw the show, and we liked it’

Marisela, a young woman of African descent on the construction staff, recalled that cross-dressing performance artists “had a show in a private house. They invited the girls from the [workers’] dining room. We went, we saw the group, the show, and we liked it.”

One drag artist spoke from his home, the site of performances. “We used sheets for fabric, no sequins, nothing. The dressing room was in the bedroom, and we acted here. When the show moved to the backyard, we used this as our dressing room. The public brought their own chairs. Marisela even brought a sofa! In the short time we worked in my backyard, this was the headquarters, the cradle of cross-dressing in Havana. Hundreds of drag queens came through here who never thought they would do this work.”

The local security chief, on camera with his young daughter, expressed a backward view: “Personally, I don’t think these things should increase. On the contrary, I think they should diminish. Children go there and see a person who is a man in normal life, or who goes around as a man, and later they see him dressed as a woman. That child will want to experiment, and that’s not what I want to see.

“Also, they charged admission for the parties they gave at home.” In fact, noted one party participant, the funds at one event were collected for the troops of the territorial militia — for the defense of Cuba.

The security police chief called off the drag shows. But in a workers’ state, that’s not the end of the story!

In a workers’ state, a place is created

Marisela explained, “After the police stopped the parties, there was no place for them to perform. In solidarity I began to collect protest letters and petitions. The only option was Fifi. To bring them here so everyone could see them. I was convinced they were good.”

The woman whose co-workers and neighbors call her “Fifi” is a Cuban of African descent. As a child before the revolution, she had to start work at the age of 9. She explained, “I was one of the 70,000 maids that Cuba had before 1959. I couldn’t enjoy much of my childhood. Now I’ve had the opportunity to work on the development of La Güinera, and I feel like a new woman.”

She narrated how her consciousness about transgender and homosexuality changed qualitatively, while in a position of social leadership.

Fifi remembered, “Marisela and the others came to see me. ‘We want them in the cabaret. If you haven’t seen them, you can’t object.’

“At first I rebelled,” Fifi said, recalling her arguments: “I’m an older woman. I wasn’t accustomed to running around with this ‘class of people.’ I said, ‘No, keep them away. I don’t want to hear about people who run around with a double façade.’ . . . I said, ‘No, please, I can’t be around you guys. I wouldn’t be doing my duty to society. I’m too old for this stuff. I’ve never been involved in these things.’”

But Marisela persisted. She said, “Fifi, I saw a show. Fifi, they should start at once here in the workers’ cafeteria.”

One drag performer said of Fifi, “She opened a cabaret in the workers’ cafeteria and brought us into it. She made us face the ‘herds’ of public we were afraid to face. She reassured us. She said, ‘Do it; face them; you’ll see. Nothing will happen.’”

Another performer added, “Fifi should be honored by us. She’ll always be close to our hearts for the wonderful way she treated us.”