The following are edited excerpts from an interview with an official spokesperson of the Sudanese Communist Party, Dr. Fathi al-Fadl, published in January in the International (English-language) section of the Turkish e-zine Kaldıraç (The Lever). Al-Fadl discusses current preparations for launching a general strike.

A mass movement in spring 2019 in Sudan, located south of Egypt in northeast Africa, defeated the 30-year military dictatorship of Omar Hassan Ahmad al-Bashir, but was unable to permanently oust the military. (workers.org/2019/04/41952)

In Oct. 25, 2021, the military carried out a coup, arresting the president and civilian members of the cabinet. A determined resistance has developed against this coup, with the SCP playing a vital role. 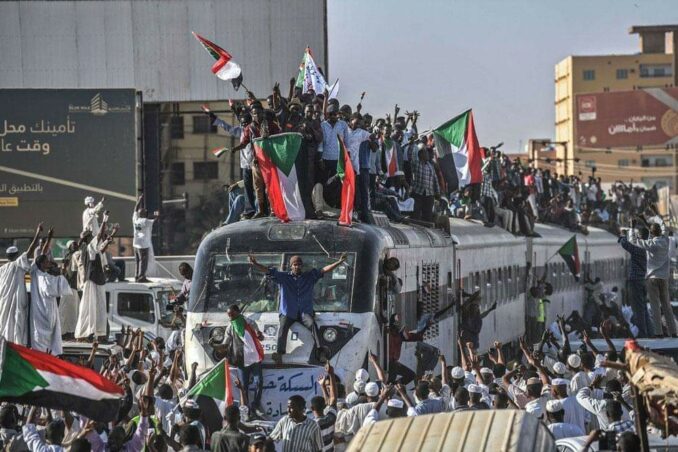 Kaldıraç: What forces are behind the Oct. 25 coup d’état?

Dr. Fathi al-Fadl: The security committee of the previous regime, which was established by an agreement reached in June 2019, formed part of the Sovereignty Council (SC). The Oct. 25 coup aimed to block the path of the growing resistance to the regime’s economic policies. It took place just when all expected that the presidency of the SC should be handed to the civilian component of the council.

Kaldıraç:  How should we interpret the attitude of Prime Minister [Abdalla] Hamdok?

al-Fadl: Hamdok was appointed by the Forces for Freedom and Change. However, from the very beginning he began leaning toward the military component. We should also stress that Hamdok is an international civil servant of Western financial institutions. So, in a way, he was the link between the international community and the regime.

During his years at the helm of power, he introduced and implemented the full instructions of the International Monetary Fund and the World Bank. . . . The difference between him and the military junta is around the issues of handing over [Omar Hassan Ahmad] al-Bashir and his clique to the International Criminal Court and other issues related to crimes committed against the people in Darfur.

Hamdok is the stooge of the U.S., EU and Western governments. He fulfilled his role in having Sudan completely under the control of the IMF and WB. Facing growing opposition to the Oct. 25 coup, the junta tried to use him to appease the opposition, as well as to avoid sanctions from the West. He signed an agreement with the leader of the coup, who was under the orders of the West.

Hamdok identified himself with the coup, losing the little credibility he had with small sections of the civil society. He failed in his mission to form a new government, resigned and left the country.

Kaldıraç: Did imperialist powers influence the processes that arose during and after the coup? How so?

al-Fadl: U.S. and EU imperialism, together with their clients in Sudan’s region, especially the Gulf states and Egypt, have used contradictory tactics in their attempts to impede and abort the radical changes demanded by the Sudanese people. U.S. imperialism created the scheme of “Soft Landing,” in an attempt to involve some opposition forces in cooperating with the regime and forming part of it in exchange for sharing power.

This U.S. scheme led to the UMMA Party and the Sudan Congress Party, as well as two armed groups, agreeing to the project and engaging in talks with al-Bashir. However, beginning with the mass uprising in January 2018, and under pressure from people taking to the streets, these groups started to hesitate and were forced to join the mass upheaval.

Following the palace coup of April 11, 2019, staged by the generals, which removed al-Bashir again, these two parties accepted sharing power with the military. Hamdok was appointed prime minister. All these developments were realized in cooperation and intervention from U.S. imperialism.

However, the Sudan Communist Party — together with the Resistance Committees (RC) and Professional Alliance (PA) — which groups, together with the trade unions, managed to mobilize the masses and organized the largest mass demonstration since the beginning of the revolution. This development, which has clearly changed the grip of the generals on power, forced the ruling circles to stage a second coup Oct. 25. It was clearly an act supported by the U.S., EU and neighboring countries.

Kaldıraç: How would you describe the current stage of the resistance? How do you foresee it progressing?

al-Fadl: As far back as 2013, the SCP decided to try to organize the masses in a different form, taking into consideration that the Muslim Brotherhood has taken steps to dissolve trade unions, break the main public sector, destroy through privatization all productive industries, liquidate the railways and other major public transport companies and crack down on trade unionists, peasants and all progressive forces, including the SCP.

The new SCP tactic was based on organizing the masses at the workplace, residential areas and institutions of learning into Resistance Committees. These committees were supposed to play the basic role in creating a network between the different sectors of the society.

The presence of communist activists in the residential areas helped to develop this work. Accordingly, the communists, democrats and patriots in the workplace and schools and universities played a major role to attract professional lawyers, teachers, engineers, doctors, etc., to the opposition.

Special attention was given to the situation within the working class and the peasantry, both in the residential area and at work. These RCs were organized on a national level on a horizontal basis. They have formed the backbone of the opposition movement till today.

The RCs together with the PA have led the struggle since 2018, and today they are at the forefront of the struggle to defeat the coup, overthrow the dictatorship and establish the complete civilian democratic rule. These organizations are the organized force within the broad alliance that is being established. The Resistance Committees represent the main block of the masses in the streets and play a major role in the confrontation against the security forces in the street battles.

Kaldıraç: The party offered a ground of unity for the resistance/opposition forces. Today, what point is this unity at?

al-Fadl: The SCP is adopting its tactics to develop the organized force that can have a leading role in the broad front. The RCs are composed of different social forces depending on the concentration of the population. While workers and peasants play their role in these committees, this is not the only way to organize these important two forces.

The SCP is building the workers’ front in the workplaces, as the peasants’ alliance does in the countryside. The SCP is trying to establish a national democratic front around which it can build a broad alliance.

Due to the reality of the situation described above, the SCP is working on two levels: building its organs of communications with the revolutionary masses; and at the same time, advancing the work on the broad front. It is a rather difficult task, but the SCP have decided to send Central Committee members to work with party branches on the ground levels. I can say the process is producing tangible results.

Kaldıraç: You are under a huge attack. How do the Sudanese people and revolutionaries provide their self-defense?

al-Fadl: Since the beginning of the current uprising, that is after the Oct. 25 coup, 53 people were shot dead, and over 2,300 wounded, some in critical condition. Hundreds are detained. Yes, we are under huge pressure. But the main weapon we have is the intensification of the mass peaceful protest actions. These include marches in the streets, strikes, sit-ins, protest meetings, petitions, etc. and building street barricades to impede and stop the movements of the security thugs.

The main aim of the current uprising is to win the overwhelming majority of the population, who for one reason or the other do not come out to the streets, but who will form a great weight in the battles to come, especially in the preparation for and the launching of the general political strike and reaching the implementation of the complete civil disobedience.

Kaldıraç: What line of action do you propose with the political strike?

al-Fadl: Be it in the streets, factories, offices, schools and countryside, all actions aim to prepare for launching the general strike. The mass protest movement, while united in its actions, is underway to establish the united central leadership of the whole, large and broad front. A revolutionary council is being built, composed of the representatives of the coordinating committees of the RC, the Professional Alliance and representatives of the workers and peasants. The SCP, through its presence in the different groups, plays its role.

Kaldıraç: At what stage do you think the Sudanese Revolution is?

al-Fadl: At the moment, talks are proceeding for reaching the Broad Front leadership, which may include women’s and other civil society organizations and political parties. The leadership of this body will facilitate the complete defeat of the present regime and the seizing of power by the hands of the people.

We have behind us the rich experience of toppling two dictatorial regimes in 1964 and 1985. On that, our people devising their tactics are making use of the positives and trying to avoid the negatives of the past.

Al-Fadl asked the Turkish movement for international solidarity, a request which we assume also holds for anti-imperialist forces in the United States.