The following is based on a Jan. 9 press release from Workers Assembly Against Racism.

Jan. 12 will be “Happy Unbirthday” for Jeff Bezos, Amazon founder and the richest man in the world.

On that day protests in New York City, San Francisco, Boston, Seattle, Atlanta, Chicago, Philadelphia, Cleveland, Baltimore and other cities will demand Amazon stop spending millions of dollars trying to stop workers from organizing and fighting for their rights. 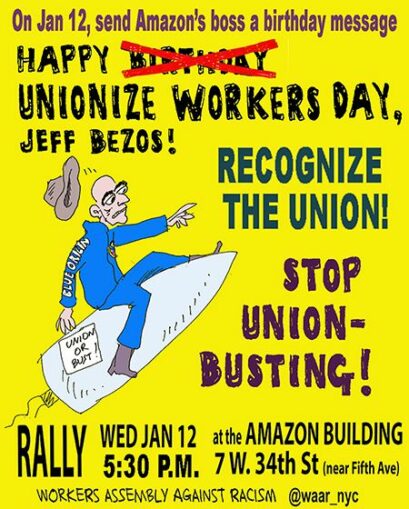 In New York City, the Amazon Labor Union (ALU), the Workers Assembly Against Racism (WAAR), the New York Coalition of Black Trade Unionists and other trade union and pro-worker activists will demonstrate in front of Amazon headquarters on W. 34th Street near Fifth Avenue. Their demand is for Amazon to immediately recognize the Amazon Labor Union, which represents thousands of Amazon workers in Staten Island.

Other demands include that Amazon reinstate pandemic safety practices, especially expanding COVID-19 paid leave time. Amazon recently reduced its COVID-19 isolation policy from 10 days to seven. ALU leader Chris Smalls responded on his Twitter feed: “What they don’t mention is that this affected at least 10,000 workers at once, and nobody can even get through over the phone to an actual person to put in for a COVID-19 leave, so the system is [automatically] deducting workers’ time, which results in termination when going negative in UPT [unpaid time off].”