This commentary, recorded by Prison Radio, aired on Democracy Now on Dec. 28. Archbishop Tutu visited Mumia Abu-Jamal in 2007, when he was still on death row.

Archbishop Desmond Tutu, 1931-2021. Almost a century ago, a little African boy was born to a small family in a small town where gold mining was the chief industry. The town was Klerksdorp, in what was then called the Transvaal.

Father was a teacher, and a young boy wanted to follow in his father’s footsteps. But the politics of white supremacy, known by the term “apartheid,” prevented him from making that choice. That policy was developed by the National Party after it won election in 194, and passed a law called the Bantu Education Act of 1953, legalizing racial segregation in schools. That state decision forced Desmond Mpilo Tutu to change from teacher to preacher. 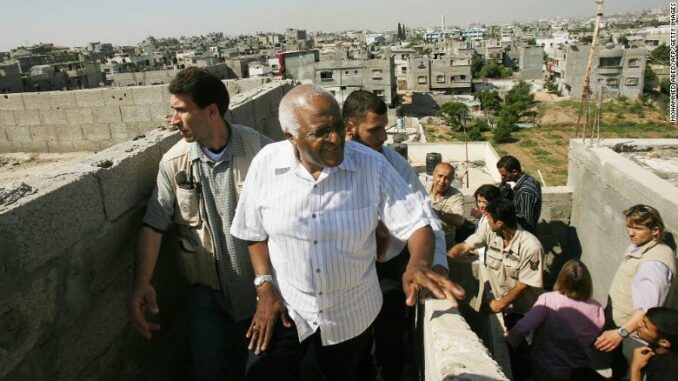 A new history was written. Desmond Tutu studied, graduated and was ordained an Anglican priest — and began a steady climb in the church hierarchy, being named its archbishop in 1986, the Archbishop of Cape Town.

As the anti-apartheid movement swelled in South Africa, so, too, did repression by the state. And with most militants from the African National Congress, or ANC, driven into exile, the archbishop stepped into the breach, presiding over funeral after funeral and giving voice to the Black oppressed majority of the nation. He played a pivotal role in speaking out against the racist system of government and suffered arrest and attacks by police, tear gas at protests.

Throughout it all, he stayed true to his religious beliefs, a committed Christian who saw all life as valuable. He preached for peace and reconciliation. He preached, too, for justice. He spoke out firmly against violence, whether by the government or the freedom movement.

And as the profile of the little priest grew, so did his concerns for justice and freedom, even beyond the borders of South Africa. The archbishop, lovingly called “The Arch” by his friends and family, called the government violence, repression and separation against the Palestinian people a new form of apartheid. He called for freedom for the Puerto Rican people from the United States government. He critiqued the suffering and state violence against the Muslim minority in Myanmar.

And the little priest even visited a man on death row, where he wondered why a man had to be shackled in a little room divided by a glass window where the door was closed, shut, locked and didn’t even have door handles. The Arch was quiet, serious, a ray of spiritual light in dark places and a joy to meet.

When apartheid fell in the ’90s and South Africa became reborn as a democracy, Archbishop Tutu heightened his critique of the new Black government, which he said was getting rich as the people got poorer and poorer.

He was short, yes, but his spirit reflected a giant. His passage on this planet was a message of love for the world’s oppressed, no matter where they were. He struggled for change with his prophetic voice, his sweet humor, his deep love and a boundless sense of compassion. Desmond Mpilo Tutu, born October 7, 1931, returned to his fathers after 90 summers, an example of love, not fear.