Nearly 2.3 million people, who are incarcerated every day in prisons, jails and detention centers in the United States, face possible death sentences while locked up during a deadly respiratory pandemic. Despite facing inhumane and unsanitary conditions, they have shown great solidarity with one another and resistance to their brutal oppression. 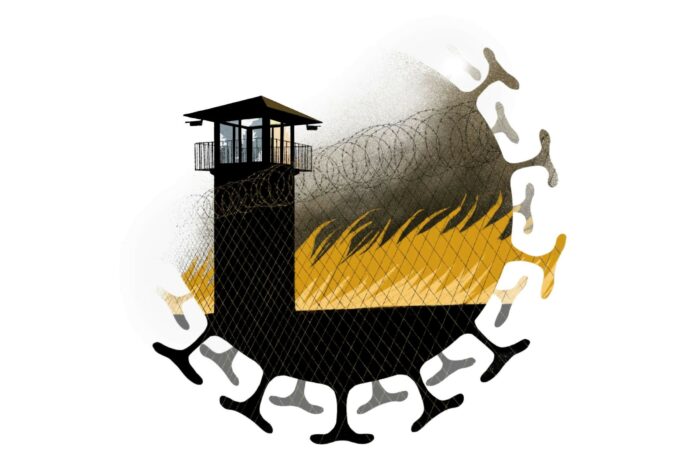 Since the start of the pandemic, prisons and ICE detention centers across the U.S. have reported at least 460,918 total cumulative cases among incarcerated people and 2,933 total cumulative deaths, according to the UCLA Law COVID Behind Bars Data Project.

This project is sure to note that true case and mortality counts are likely higher, and may be significantly higher, than reported. This undercount is due to the data available being self-reported by carceral agencies, which may be concealing reported cases due to poor testing practices by many agencies, but the undercount is also due to the fact that many carceral agencies have stopped reporting COVID-19 data. (uclacovidbehindbars.org/)

Some of the most heartening data collected on the members of our class behind bars come from projects like Perilous Chronicle, which has kept a running list with news sources detailing the uprisings, hunger strikes, escapes and other various acts of resistance available to the public.

PC has been tracking these acts of resistance by incarcerated people in the U.S. and Canada since the end of 2010. Since the pandemic has exacerbated already dire conditions inside, the number of recorded acts of resistance has increased. (perilouschronicle.com)

In 2021 there were at least 112 recorded acts of refusal to accept death-making conditions. This is a decrease from at least 180 acts of resistance in 2020 across prisons, jails and detention centers in the U.S., which was up markedly from previous years.

The COVID-19 crisis behind bars has elicited a number of lackluster and dangerous responses from the various carceral agencies at the federal, state and local levels.

Isolation, already extreme while incarcerated, is made worse when the response to the rapid spread of the virus is lockdown of imprisoned people to their cells — with minimal if any access to basic hygiene like daily showers let alone basic recreation levels needed to sustain bodily health.

Many facilities suspended in-person visits with loved ones, which for many are one of the few places for human connection with their larger communities they were kidnapped from.

Quality physical health care behind bars is already hard to come by, if imprisoned people can even gain access to it. Mental health care is largely nonexistent in a setting that has often driven people to take their own lives because conditions are so brutal.

Various federal, state and local systems of prisons, jails, juvenile and migrant detention centers are decentralized. One thing many of those systems have in common is the spread of the virus through transfers of incarcerated people, from processing facilities and other units, made during a highly contagious pandemic, without testing and/or quarantine protocols.

Even prior to the pandemic, prisons, jails and detention centers were a public health crisis. To imprison this many people — most of whom are historically and disproportionately oppressed in this country on the basis of race, gender, disability and class among others — is to make them vulnerable to premature death, because of the organized violence and organized abandonment by the capitalist state.

The organized violence of cops, courts and cages — on stolen Indigenous lands — and systemic hospital closures, mass houselessness and environmental racism are a handful of examples that exemplify inequality. And such structural conditions are the cause of long-term inequality on this continent since the colonizers first arrived.

Colonizers have imposed class war from their ruling positions since landing from across the Atlantic Ocean, with various means of forced and otherwise exploited labor for the profit of a few, especially enslavement. Prisons, jails and detention centers are one of the most effective tools the ruling class has to impose social control and drive wages down for the entire working class.

From an always-present and ever-growing movement of abolitionists in Texas, rejecting the war on migrants through Governor Greg Abbott’s Operation Lonestar, to each and every one of the 38 countries where the repressive U.S. model of prisons and policing has been exported, we are fighting for abolition like our lives depend on it. Because they do.

The U.S. empire has a violent history of institutionalizing and codifying white supremacy. Prisons in form and function are monuments to white supremacy. They are concentration camps for the poor, oppressed nationalities and dissenters.

This is exemplified in this moment of global pandemic, where the rapidly accelerating and completely preventable deaths of people inside and outside prisons are an act of genocide. This does not come as a revelation but as a call to action.

We’re not building toward reform of any of these institutions. Prisons, jails and detention centers are themselves a form of enslavement and encomiendas (the Spanish Crown’s land grants to Spaniard settler-colonizers conferring rights to tribute and forced labor from Indigenous inhabitants). Reform gives us more of what we’ve already got — structures of ceaseless violence that continue to maintain wealth accumulation for human traffickers and perpetrators of genocide.

We are building toward abolition, toward revolution. We support diversity of tactics and the right of the oppressed to self-defense and self-determination by any means. We are fighting to redirect stolen resources toward human needs like health care, housing, safe water and food and to transform the root causes of suffering and violence.

What we build together, in the wake of tearing down the walls of capitalist cages, to protect vulnerable members of our class as well as ourselves, will make all the difference.

Mirinda Crissman is co-chair of the Prisoners Solidarity Committee of Workers World Party.