Steps away from Broadway shows shut down by spiking COVID-19 numbers in New York City, a crowd of more than 80 people gathered in Times Square Dec. 22 to demand Amazon recognize the union being organized by the Amazon Labor Union at the company’s Staten Island warehouse, as well as unions organizing in other locations nationally. 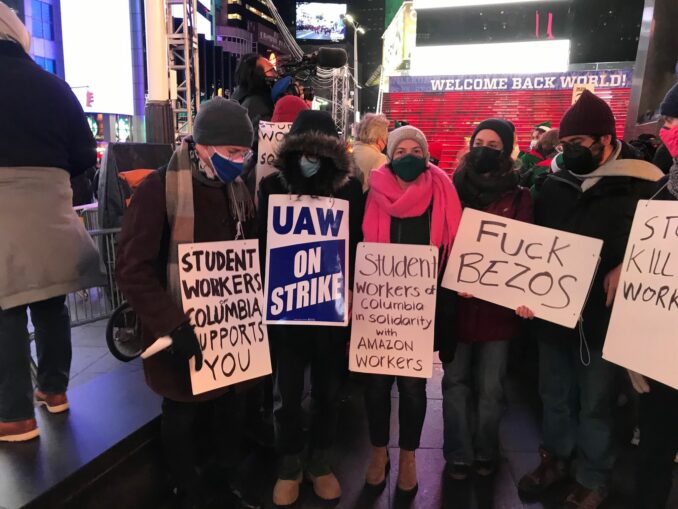 The rally, co-organized by ALU and Workers Assembly Against Racism (WAAR), completed a consequential day for both the workers’ struggle and the Amazon union fight. That morning dozens of workers organized by Amazonians United Chicagoland walked off the job in two locations, Cicero, Illinois, and Gage Park in Chicago, citing punishing hours and unsafe COVID-19 conditions. Then in New York City, workers with the ALU refiled their petition for a union election with the National Labor Relations Board and conducted a targeted walkout at the Staten Island warehouse. 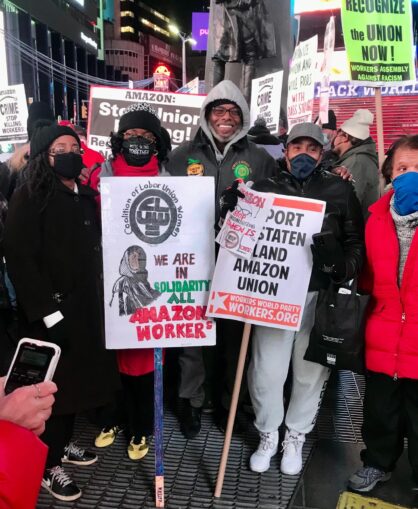 Only hours before the Times Square rally, news broke that in late November, two workers at Amazon’s warehouse in Bessemer, Alabama, had died within six hours of each other during their shifts. At least one of them was told to keep working or he’d lose his job, even though he said he needed to go home. Evidently Amazon has been trying to cover up the fact that at least six workers at the Alabama warehouse have died in the last year.

This news comes on the heels of the recent deaths of Amazon workers in Edwardsville, Illinois, where six were killed when the Dec. 10 tornado demolished the warehouse — after management would not allow workers to keep their phones for emergency weather alerts nor allow them to leave in the face of the danger.

Among the most popular of Times Square rally placards was “Amazon Crime: Stop Killing Workers!” Since the tornado, The Intercept revealed that Amazon’s profit-before-people mission means lifesaving emergency drills are frequently sacrificed for production — even though the company has plenty of time for anti-union captive-audience meetings.

That same day, in response to unfair labor practice complaints, Amazon was publicly forced by the NLRB to refrain from persecuting workers attempting to organize unions at their 110 facilities in the U.S. This provides an opening for unions and radical organizers to intervene and enforce the new rules on behalf of the workers.

Many in the corporate media have falsely pronounced the Staten Island union campaign dead, because the workers had withdrawn their NLRB petition in mid-November to get more challenge-proof signatures.

The Dec. 22 rally showed the Staten Island campaign is alive and kicking and the ALU is solidifying its leadership of workers in the warehouse. This undoubtedly explains why ALU organizers have been subject to constant harassment by Amazon lawyers and the New York Police Department. ALU leader Brett Daniels spoke at the rally about being handcuffed along with Smalls on trumped-up charges from the NYPD, which were later dropped.

The ALU’s growing base in the Staten Island warehouse was dramatized by the union’s intervention in a sexual harassment case there. Amazon bosses had been protecting a serial abuser but were forced to take action after the union held a series of protests demanding he be removed. Maddy, the target of the abuse, spoke at the rally and later told Workers World that while much firmer action is still needed by management, absolutely nothing would have been done without the union. 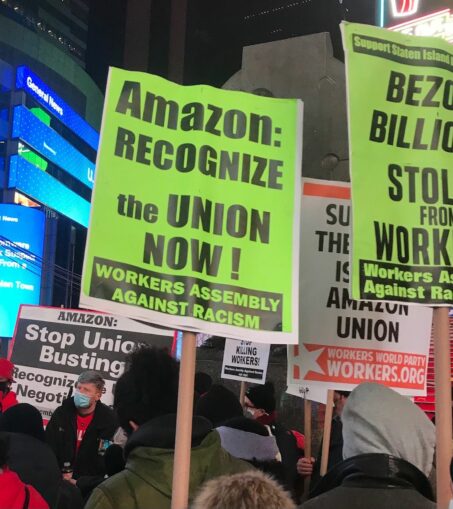 Holmes’ remarks captured the spirit of the action’s main demand that Amazon recognize the union now and negotiate directly with the workers. This would bypass the long NLRB-supervised process which bosses use to lie to and intimidate workers.

Others at the rally included Transit Workers Union Local 100 leader Charles Jenkins,  a longtime leader in the Coalition of Black Trade Unionists; Edward Yood with Communications Workers of America Local 1180; a delegation from the Coalition of Labor Union Women; and a contingent of six striking Columbia University student workers, members of UAW Local 2110. And there was a rousing performance by Reverend Billy and the Stop Shopping Choir!

Labor activity is taking on momentum everywhere in the U.S. In the wake of the Edwardsville tragedy, workers at six Amazon warehouses in the New York City and Washington D.C., metro areas, organized by Amazonians United, pulled together petitions and job actions demanding workers be able keep their cell phones while on the job. And following the Starbucks Workers United victory in winning union elections in Buffalo, new worker campaigns at the coffee giant have been announced in Boston and Seattle.