With great publicity, President Joe Biden called a grand, international Summit on Democracy for Dec 9-10. This gathering, held on Zoom, was hardly more than a Washington D.C., webinar with a few hundred well-chosen invitees and a well-controlled microphone. 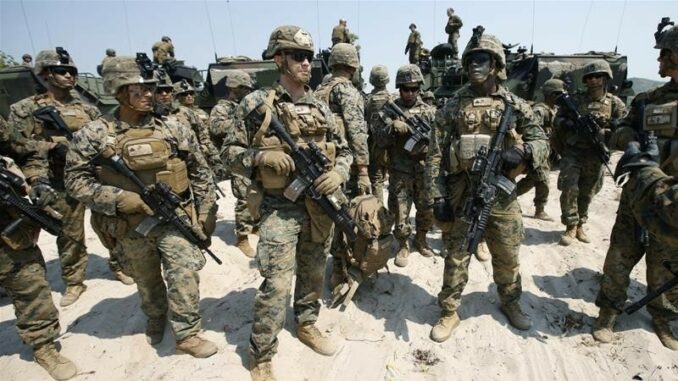 Biden invited 111 countries. He snubbed another 81 countries, representing more than half the world’s population.

This political theater was an effort to create the appearance of a global political instrument where the U.S., as the dominant force, can claim political and moral authority to act unilaterally. Platitudes on democracy served as a cover for an increasingly aggressive military expansion. The event was scheduled during International Human Rights Day to overwhelm any real attention to human rights.

The gathering had nothing to do with democracy. Its guest list included apartheid Israel, the Philippines and Colombia. Most Asian and African countries were uninvited. But to keep the number of participating countries high, 30 countries with fewer than 1 million inhabitants were included.

There were also a series of participating U.S. organizations, such as the U.S. Agency for International Development (USAID), which have orchestrated coups and U.S.-funded operations against democratically elected governments globally. Guests from the “private sector” were included but unnamed. But capitalists are who really call the shots on a world scale.

The staging was to highlight the claim that the United States, as a democratic country, must and would lead the world against “authoritarian regimes.” Authoritarian was the slur used to target China, Russia, Venezuela, Cuba, Iran and a significant number of countries which assert their national sovereignty against imperialist domination.

The purpose of this event was sinister. It was to assert U.S. hegemony worldwide, by shaping a bloc or alliance directed against numerous countries the U.S. has imposed sanctions on, and especially against China.

The United Nations General Assembly so routinely votes down Washington’s demands and resolutions that the U.N. is no longer as useful to impose U.S. hegemony. The corporate media simply avoids coverage of U.N. votes.

For example, when for the 29th time the U.N. General Assembly voted to end the blockade against Cuba this year, 184 countries voted to end it; only two voted for keeping the blockade, with three abstentions. Such votes humiliate U.S. ambassadors.

And the U.N. Security Council can no longer be counted on for war resolutions or sanctions votes.

Even leaders of NATO members and the imperialist countries controlling the European Union are increasingly leery of accepting U.S. unilateral actions. German, French, Italian and Spanish imperialists have their own capitalist economic interests and trade deals to pursue in a shaky world economy.

Trying to shape a bloc of countries against “authoritarianism” loses touch with world reality.

A major purpose of the Summit was to invite and build support for U.S.-armed Taiwan as a way to threaten China. Only 14 out of 193 member countries of the U.N. recognize Taiwan, officially named Republic of China – RoC.

In the midst of this imperialist theater there was a reality check. Uninvited and U.S.- sanctioned Nicaragua announced its official recognition of People’s Republic of China and its break with Taiwan.

Every world politician sitting dutifully at attention knows they face the U.S. military with 800 military bases around the world, along with aircraft carriers and 18 intelligence agencies. U.S.-led invasions, coups and drone strikes are hardly secret operations. The United States military has been engaged in wars for 225 out of the 243 years of its existence and continuously for the last 20 years until the withdrawal from Afghanistan.

Domestically the U.S. image is grim, with more than 1,000 police killings a year, the largest prison system and number of prisoners. The U.S. police force at the national, state and urban level exceed the repressive apparatus of all other countries.

As former billionaire Mayor Mike Bloomberg bragged: “I have my own army in the NYPD, which is the seventh biggest army in the world.” This one urban force has submarines and drones and its own overseas operations. (Salon, Sept. 28, 2012)

The U.S. record regarding the racist suppression of voting rights, gerrymandering and support for billionaire funding of both political parties is global news.

While Biden declares the U.S. the center of democracy, his own notorious record as the leading crusader for mass incarceration and mandatory prison sentences for nonviolent crimes exposes his cynicism.

The State Department set up the Dec. 9-10 virtual event with handpicked invitees. Biden’s opening talk on a soundstage to a virtual audience lasted 10 minutes. Then the event went into a “closed door session.” Several hours later it reopened with a few scripted “round table panels.”

Biden’s opening talk declared: “A free and independent media is the bedrock of democracy.” Then, he announced that his administration would commit “critical seed money” to pay for “independent media.” Some $47.5 million would be distributed by USAID and the State Department for initiatives meant to boost nongovernmental media.

It is unclear if this $47.5 million is in addition to or part of the $300 million a year for four years ($1.2 billion) spent in what is called the ‘‘Countering Chinese Influence Fund.” This fund pays media for news stories attacking China — whatever the source or lack of sources — charging China with “forced labor” in its Xinjiang Uyghur Autonomous Region, suppressing human rights, “unfair competition” or “intellectual theft.”

Clearly media which is bought and paid for by the U.S. government is not “independent media.”

Several countries and political forces responded to Biden’s challenge by opening a discussion of democracy.

The China State Council issued a paper: “China – Democracy That Works,” explaining how China had developed its own model of democracy. China’s National Peoples’ Congress has 3,000 members chosen from across China’s regions and provinces and even the armed forces. There were programs throughout China discussing “peoples’ democracy.”

“The summit illustrates America’s weakness and its inability to endure criticism of its foreign policy at the United Nations,” said Cuban Foreign Affairs Minister Bruno Rodriguez.

Carlos Fernandez de Cossio, director general for U.S. affairs at Cuba’s Foreign Ministry, tweeted: “The arbitrary list of invitees shows it is an exercise in demagoguery. The meeting will not solve any of the world’s major problems, nor will it clean up Washington’s discredited foreign policy.”

Webinars held by political organizations such as the International League of Peoples’ Struggle made the point that the U.S. exports imperialist war in the name of democracy, with military operations since 2001 in more than 85 countries. It has killed millions of people, including civilians, and created millions of refugees on their own sovereign soil.

A webinar on socialist democracy was organized by the International Manifesto Group to discuss the democratic systems prevailing in socialist societies and expose how the U.S. concept of democracy is leveraged in support of a deeply undemocratic and violent imperialism.

This writer was a panelist on a 90-minute CGTN program in China, with panelists from Lebanon, Nigeria, Russia, Australia, the U.S., China mainland and China Hong Kong discussing their views on democracy.

Speaking from the U.S. and as a writer for Workers World newspaper, I said that the U.S. government and the capitalist class it serves are involved in wars, invasions and sanctions to impose corporate domination but always justified in the name of democracy.

U.S. democracy does not allow people to directly vote on any issue that impacts their lives economically nor to make decisions on endless wars or the military funding that robs half the national budget. Nor can U.S. residents vote for a national health plan, despite the highest number of COVID-19 deaths in the world.

By connecting economic development and programs to end poverty for 800 million people, China opens the possibility of real democracy and participation.