Since late July, there has been an active class struggle between workers and corporate bosses at the video game company Activision Blizzard, culminating in three strikes — the third ongoing — and powerful efforts to unionize. 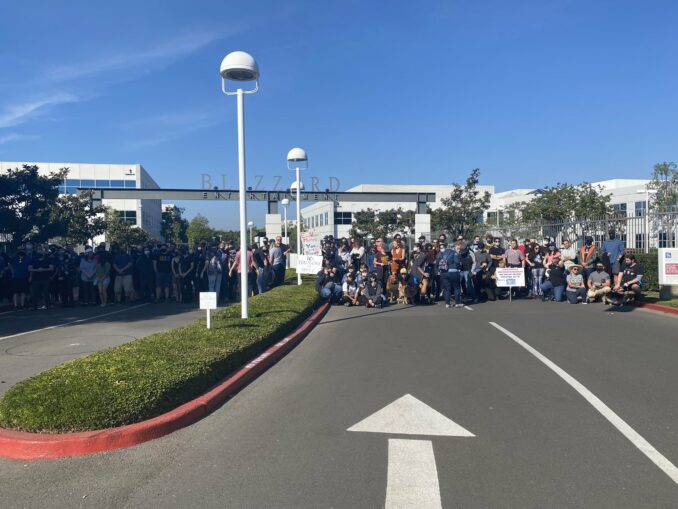 On July 20, a lawsuit was filed against Activision Blizzard by the California Department of Fair Employment and Housing, exposing a distinct and pervasive “frat boy” culture, unequal pay structures, rampant sexual harassment and negligence on the part of “Human Resources” to take reports seriously.

The company responded by gaslighting the claims as “distorted” and “false,” and workers retaliated with a work stoppage against the negation and abuse. (Bloomberg Law, July 2021).

CEO Bobby Kotick made a performative apology for the response and promised an internal review of the company’s policies to be done by infamous anti-union law firm WilmerHale. The workers refuted this choice, stating a conflict of interest between the company executives and the law firm from previous cases. They disagreed with the choice further on the grounds that WilmerHale has a known reputation as a union-buster and as such is not impartial when it comes to securing and ensuring the rights of workers.

In response to the Dec. 3 layoffs of 12 contractors at Raven Software, a game studio owned by Activision Blizzard, employees initiated a work stoppage. Unified at the moment as the ABK Workers Alliance, they responded to the sudden layoffs on Twitter stating:

“This has not only destroyed the morale of our workforce but obliterated trust in the company that has been routinely asking us for patience in improving our work lives. We will not back down from this fight for equity; Raven QA, your contributions to our studios and the industry were incredible, and you deserve much better.” (tinyurl.com/2b97yr4h)

The stoppage is still ongoing and gained mainstream media coverage on its fifth day, when the workers were asked by the Communication Workers of America to sign union authorization cards.

The company responded fearfully to this first step in the establishment of a union by sending out a mass email groveling to the workers, strongly suggesting they refuse to unionize and quietly accept their oppression.

The ABK Workers Alliance is demanding the reinstatement of all laid-off employees, the conversion of all quality assurance contractors to full-time employees, improved representation, transparency in pay and an unbiased third-party audit of the company. Jessica Gonzales, founder and organizer of the ABK Workers Alliance and a prominent voice in this class struggle, has started a strike fund to support the striking workers.

Since the sexual harassment and gender discrimination cases started against Activision Blizzard in the summer, workers have held two other strikes. In mid-November, employees at an Irvine, California, branch location held a strike, calling for the resignation of Kotick and a workers’ audit of the company. The earliest strike on this timeline was in response to the company’s initial response to the lawsuit, starting at the very end of July.

The capitalists are deploying their time-honored methods of denial, “strong suggestions” and the hiring of union-busting lawyers; and in that, nothing is too remarkable about this case. But the tenacity of the workers against the company across a long time line, with multiple strikes gaining media attention, is remarkable.

The importance of this unionization effort in an industry mostly devoid of unions must be acknowledged as an important part of the tide of unionization we see happening across the country today.

This case shows good timing on the part of the workers for knowing when to strike. When a company faces litigation following some misconduct inevitable to a capital-patriarchal structure, they become more vulnerable to strikes by the workers. Any strike action will enjoy more media coverage, and the company will endure more scrutiny from the public eye. Those at the ABK Workers Alliance have demonstrated how this scrutiny leads to better opportunities for more successful striking and unionization efforts.