Amazon union organizing is accelerating, as Staten Island Amazon workers refile for union election. On Dec. 22 the Amazon Labor Union will resubmit its petition for a union vote at the facility, known as JFK8, to the National Labor Relations Board. Workers will hold a lunchtime walkout at the warehouse. 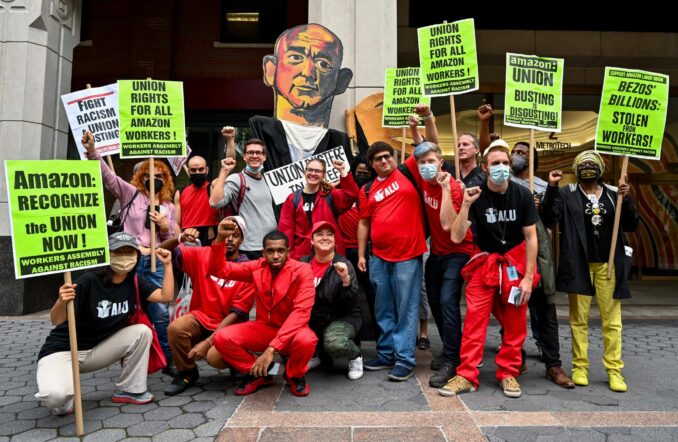 That evening Amazon workers will hold a rally for union rights, gathering together their growing New York-area army of supporters at the Red Steps in New York City’s Times Square at 8 p.m.

The demand of the rally is that Amazon immediately recognize the ALU. The urgency of this demand is underscored by the heartbreaking deaths of workers at the tornado-destroyed Amazon warehouse in Edwardsville, Illinois, where bosses prevented workers from using cell phones or even leaving.

“As a matter of public health and a matter of reparations, Amazon should immediately recognize the union without a drawn-out NLRB election,” Amazon Labor Union leader Chris Smalls has stated.

The needless deaths in Edwardsville underscore Amazon’s reckless profit-over-people practices, which range from forcing workers to stay on the job in extreme weather, as happened when Hurricane Ida struck, to having more than double the average rate of warehouse injuries.

The Intercept reported Dec. 13 that Amazon warehouses rarely have fire drills, because the bosses don’t want to take time away from production. What an example of profits-over-people: Amazon requires workers to come off the line and sit in anti-union captive audience sessions but won’t schedule lifesaving emergency drills.

Reasons to immediately recognize the ALU

The NLRB election can be skipped, because the Amazon Labor Union has already signed up thousands of Staten Island warehouse workers who want a union. Amazon could simply recognize the union now. The 2020 attempt to form a union at a Bessemer, Alabama, warehouse shows that the long drawn-out NLRB voting process is detrimental to unionization. Bosses use that period to lie, intimidate and threaten the workers into voting against the union. 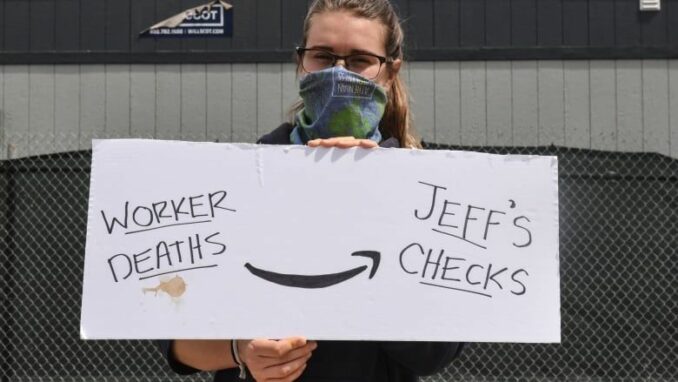 Amazon can’t be trusted not to union bust. The NLRB found Amazon engaged in anti-union activities that ended up denying the mostly Black, mostly female workforce at the Bessemer warehouse the right to vote for a union. Amazon isn’t unique in its illegal behavior — one of four employers actually fire workers for trying to form a union.

Amazon workers need a union to resist the racism and gender bias of a company that has been sued multiple times by workers subjected to racist and anti-woman harassment. This behavior includes the racist treatment of ALU president Smalls after he spoke up about lack of COVID-19 safety. Another example is the placement of hundreds of Amazon’s polluting warehouses in communities of color, subjecting them to toxic exhaust emitted by the constant traffic of massive vehicles.

Justice for workers through official channels takes forever — or simply never comes. After the Alabama vote when Amazon lied, cheated and intimidated workers, the NLRB took over six months to complete a report finding Amazon guilty — and another three months for a decision to authorize a new vote.

Now, a full year from the start of the Bessemer campaign, the notorious 150% Amazon worker turnover per year means many union supporters have quit or been fired. Organizing for the union has to be rebuilt with workers who come and go rapidly, leaving because of wear and tear on their bodies or having been fired for not “making rate” or having too much “time off task” to meet Amazon’s impossible standards.

“Making rate” injures huge numbers of workers. Amazon has sky-high rates of injuries, more than double the average of other companies doing the same work. Many of those injuries are musculoskeletal disorders, which come from repetitive lifting or other repetitive motions. These are injuries that linger, sometimes for the rest of a worker’s life. The enormous volume of work intensifies injury. Ambulance responses to Amazon warehouses increase by almost 50% in the weeks leading up to Black Friday shopping day, because of the punishing demand. (tinyurl.com/yckpypfp)

Amazon drives down prevailing wages for other workers. Because the minimum federal wage is so appallingly low at $7.25 an hour, Amazon claims to pay decent entry wages. But the company only began to pay more than $15 an hour in 2018. The breakneck expansion of Amazon warehouses threatens to reduce wages in surrounding areas. One of the worst examples is in Minnesota, where real wages for warehouse workers declined 14% from 2015 to 2018, after Amazon facilities opened there. A union in Staten Island or anywhere in Amazon will help keep wages higher for all workers. (tinyurl.com/2p8p32mv)

Amazon fails to protect workers from COVID-19. The company has rolled back the few coronavirus safety protocols put in place in 2020 and has hid pandemic-related information from the Occupational Safety and Health Administration by reporting that of 20,000 infections in its workforce, only 27 occurred on the job.