Portland, Oregon’s Communities and Postal Workers United held a press conference and rally Dec. 8 to “Purge the Postmaster General Louis DeJoy.” Protesters denounced DeJoy’s 10-year plan “Delivering for America.” Speakers pointed out that two months into his plan had shown disastrous results for the postal service and the country. It has increased worker turnover, hiked prices and led to mail delays, cuts and closures of mail facilities and privatization schemes.  (cpwunited.com) 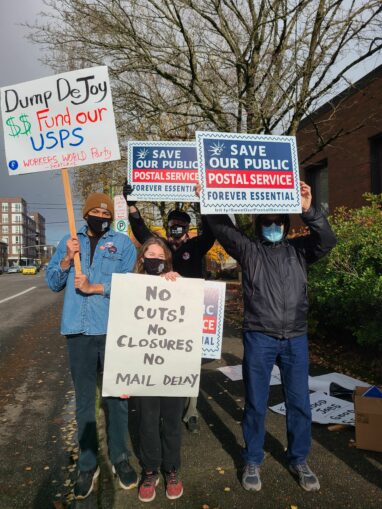 With 600,000 workers, the postal service is one of the largest employers of women,  veterans, and people of color; the USPS is the largest, most diverse, unionized workforce in the country. It’s a service, not a private business, that delivers medicines, bills, payments, checks, legal documents, parcels and advertising. DeJoy is asking workers to do more and more with less and less. People most impacted by his attacks are seniors, veterans, low-income and rural communities and small businesses.