Starbucks workers made history here Dec. 9 by winning the first union election at a corporate-owned Starbucks store in the United States. Starbucks Workers United gained a sweeping victory at the Elmwood Starbucks store with a greater than two-to-one margin (19 yes, 8 no). The win comes on the heels of more than three months of vicious union busting by Starbucks corporate management. 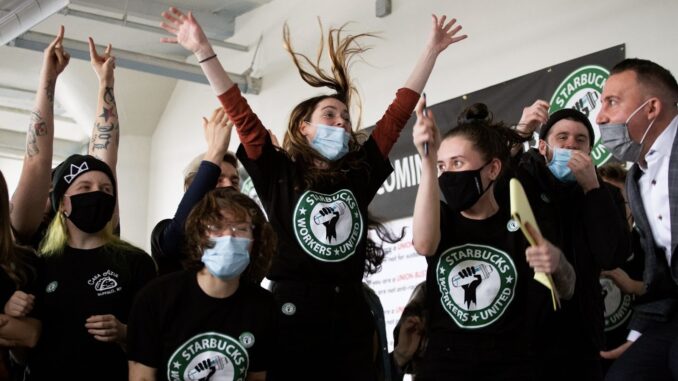 “Our fight isn’t over until we get a contract,” said Jaz Brisack, Starbucks worker and union organizing committee member. Brisack works at the Elmwood location.

Starbucks Workers United is also declaring victory at a second store, the Cheektowaga location, which had a strong majority but was not officially declared won, due to seven contested ballots. SWU challenged the ballots due to the fact that the voters don’t work at that particular store, being employed at a completely different location.

Starbucks argues that the workers are eligible to vote, because they picked up shifts at the Cheektowaga location. However, there were other workers who had picked up shifts there but had come from another store known by the company to have strong union support. These workers were not given ballots!

It seems clear that Starbucks only argued voting eligibility for workers who might not vote “yes” for the union. Union supporters are confident that after the NLRB disqualifies these bogus votes stacked by Starbucks, the remaining votes left qualified will be “yes” and constitute the majority for the union — generating the second groundbreaking victory for the union.

A victory of this magnitude brought tears to the eyes of the union organizers and supporters. The campaign prevailed against what was essentially a war of threats and attrition, waged by the company against its workers. The win is a testament to the undying optimism and dedication of the worker organizers. The road to victory wasn’t easy and was marred with harassment, intimidation, lies and slander from corporate.

Starbucks corporate strategy has been to turn the workers against each other, fill the stores with new hires and isolate them from union supporters, flood stores with out-of-town managers trained in surveillance and disruption, and even go as far as closing entire stores for extended periods of time if they were known to have strong union support, such as the Walden-Anderson location in Buffalo.

In late August when the union drive was announced, corporate executives and managers from around the country swarmed Buffalo in a deliberate attempt to disrupt union organizing and create an environment of fear and hostility. Brittany Harrison, a former Starbucks manager from Mesa, Arizona, recently revealed in an interview with More Perfect Union that managers were being coached by corporate on how to disrupt union activity.

In a recording taken by Harrison at one of these anti-union briefings, corporate executives can be heard saying: “We’re a huge company. Unions would love to get a hold of us. Do you know how much money they’d make off of us?” Corporate painted union organizers in a negative light and made accusations that workers who were union supporters were “not real partners.” They even dubbed themselves “God,” by making the argument that bringing a union in as a “middle man” between workers and corporate is the equivalent of a Catholic priest coming between a worshiper and their god. (tinyurl.com/5n8zvzbh)

This isn’t the only bizarre reference that Starbucks executives used to attempt to discourage workers from supporting the union. Former CEO Howard Schultz made a big appearance in Buffalo during the company disinformation campaign. In a shockingly insensitive comment, he said the company of Starbucks “shared” with its employees in the same way that Jewish Holocaust victims helped each other. This comment left workers feeling disturbed and deeply offended.

Brittany Harrison was diagnosed with cancer in October. After Starbucks refused to offer her paid leave, she was left with no other option than to quit, and she told the company she would be finishing her last two weeks. The company then promptly informed her that they were terminating her early due to an “open investigation” of her work behavior — for which no further explanation was provided.

It was clear that the company retaliated against Harrison for coming forward with the recording of Starbucks corporate conversations about union busting. A fundraiser in solidarity has been set up for Harrison by members of the SWU organizing committee.

After news of Starbucks’ treatment of Brittany went public, workers in her Arizona store reached out to Buffalo organizers and decided to file for a union themselves. The Mesa store is the first beyond Buffalo to join what will inevitably become a countrywide movement of Starbucks workers fighting for their right to organize.

First union win at Starbucks in the U.S.

When we fight, we win

The victories in Buffalo prove to Starbucks workers and workers of all industries that when you organize and fight for your collective class interests, you have the power to win.

All the untold millions of dollars Starbucks has spent, attempting to break up the Starbucks Workers United, wasn’t enough to stop the persistent unionization efforts. In many ways the company’s aggressive tactics have laid bare the true face of Starbucks, undoing the years it has spent building its image as the “most progressive” company.

Starbucks union-busting campaign has shown workers and customers alike that behind all the virtue-signaling and charities, Starbucks is as bad as Amazon or Walmart when it comes to repressing workers’ rights to organize. Many workers who are union supporters in Starbucks have children and have experienced the ways in which the company abuses and mistreats parents, creating an environment that is not comfortable for or accommodating to their needs.

Starbucks positioned itself as a strongly pro-LGBTQ2S+ company and also embraced the “Black Lives Matter” slogan — after facing backlash for reprimanding workers for wearing shirts with the slogan. But theirs is a public relations campaign, about marketing to appeal to their young target audience, rather than a genuine commitment to supporting oppressed people.

From a class perspective, we understand that Black and LGBTQ2S+ workers are some of the most oppressed groupings within the working class. A company that fights tooth and nail to stop workers from organizing can never be pro-Black or pro-LGBTQ+.

A union − a tool of asserting class power

Workers and oppressed people never get justice handed down to them from the capitalists. Justice will have to be won through class struggle. The union victory in Buffalo shows that real progress can be made. A union — a tool of asserting class power — is the first step for workers in Starbucks.

The implications of this struggle are far wider than just a good contract for baristas here in Buffalo. Young people facing economic turmoil are now unflinchingly armed with newfound class consciousness. This victory is a milestone signifying a revival of a labor movement that has long been dormant in the U.S. — a victory which will inspire workers of all industries to organize.

A victory for workers at Starbucks is a victory for the entire working class, in the sense that the defeat of this behemoth of a corporation shows the vulnerability of the capitalists — the inability of the largest coffee chain in the world to successfully crush a union drive.

This opens the door for endless possibilities for the labor movement. If the struggle of Starbucks workers can be linked to struggles of other workers, like the ones organizing Amazon, as well as struggles against national oppression, gender oppression and imperialism, the potential for real qualitative change in the face of capitalist annihilation is hopeful.