Human rights and community activists in six countries held online and in-person events to mark the date 40 years ago, when award-winning Philadelphia journalist, radio personality and Black Panther Party veteran was nearly killed and unjustly charged with a crime he did not commit.

Mumia Abu-Jamal was arrested, convicted and unjustly imprisoned on Dec. 9, 1981, and subsequently convicted as the result of judicial, police and prosecutorial misconduct for allegedly killing a Philadelphia policeman. Supporters worldwide assert that Abu-Jamal was framed and is innocent, and they continue to fight for his release even after four decades. 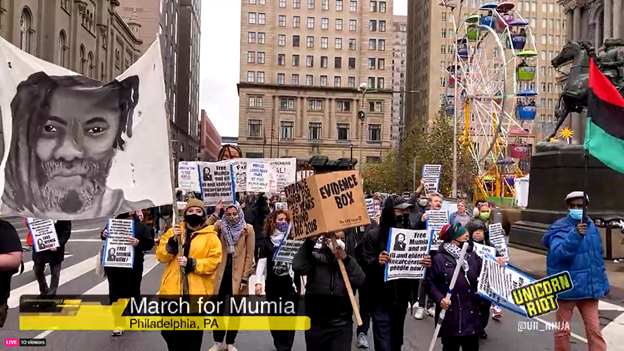 In Philadelphia, a rally and march of around 200 people gathered at the statue of abolitionist Octavius V. Catto outside City Hall on Dec. 11, where Gabe Bryant with the Campaign to Bring Mumia home opened the event, and Warrior woman Mama Pam welcomed the crowd. Laila Boutros, with Samidoun Palestinian Prisoners Solidarity Network NY/NJ, and Jacky Hortaut, co-coordinator of the French Free Mumia Collective, also spoke.

The march that followed circled City Hall to the Christmas Village shopping area near Love Park, where demonstrators blocked traffic, as longtime Mumia supporter Suzanne Ross, Rev. Keith Collins with Generation Impact Ministries, and Deandra Price with Black Alliance for Peace addressed the crowd. The demonstrators then marched to 13th and Locust streets, site of the 1981 incident, where Cindy Lou and Mama Pam spoke on court complicity with the frame-up.

The final stop was at the Criminal Justice Center at 13th and Filbert, where a commentary from Mumia was played. Betsey Piette from Workers World gave an update on the legal case while urging demonstrators to keep the struggle in the streets. A statement from the Freedom Committee for Ali Osman Köse in Vienna, Austria was read. 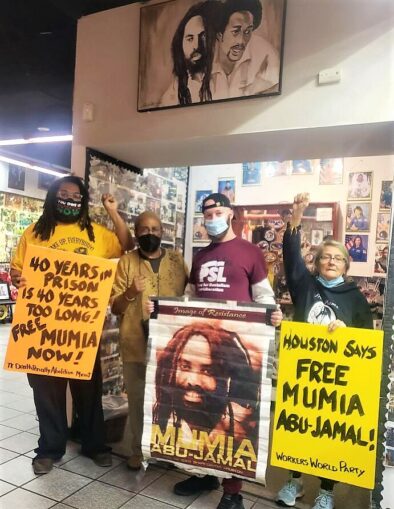 In Houston, the Texas Death Penalty Abolition Movement, Workers World Party, the Self-Help for African People through Education Center, and the Party for Socialism and Liberation held a rally despite cold, windy weather and a heavy police presence outside the office of progressive District Attorney Kim Ogg. Ogg is being asked to contact Philadelphia DA Larry Krasner to remind him that his Integrity Conviction Unit has exonerated 23 cases, yet Mumia Abu-Jamal is still wrongfully imprisoned after 40 years. Afterwards, participants gathered at the S.H.A.P.E. Community Center for food and discussions. 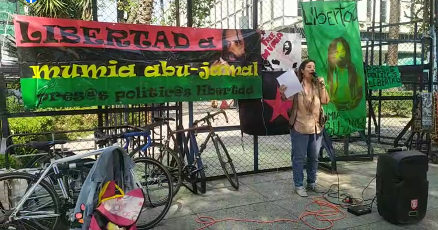 Mexico: Amigos de Mumia Mexico held a rally outside the U.S. Embassy in Mexico City on Dec. 11, including delegates from the Indigenous Otomí community, who continue to occupy the building of the fraudulent National Institute for Indigenous People. Cultural presentations followed at Casa Okupa Chiapas, including an exhibit of the engravings of Indiosindios Lopez, traditional music of La Mala Mata, a performance by Salcosoma, the soul-rap of Luna Negra, dance by Argelia Guerrero, rebel rap of Guerrilla Bang Bang and poetry-dance by Eva Palma.

Events for Mumia also took place in the Mexican cities of Oaxaca, Tepic and Nayarit on Dec. 9.

In Germany, Free Mumia Committees in Berlin, Heidelberg and Nuremberg organized events. In addition to on-street rallies, a webinar was held by the German Free Mumia Collective describing Mumia’s current legal and health situation with readings from Mumia’s book “Writing on the Wall,” translated into German.

In France, the French Collective to Free Mumia held a rally at the Place de la Concorde in Paris Dec. 8. On Dec. 10, International Human Rights Day, Mayor of Paris Anne Hidalgo commemorated the 20th Anniversary of the recognition of Mumia as “Honorary Citizen of the City of Paris.” 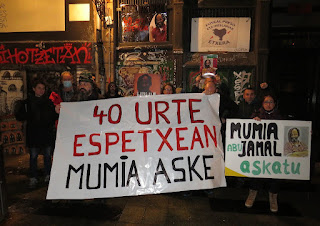 Spain: Activists held a Free Mumia protest in the Basque city of Bilbao on Dec 9.

In her Philadelphia speech, Laila Boutros, coordinator of Samidoun Palestinian Prisoner Solidarity Network NY/NJ, quoted Ahmad Sa’adat, the imprisoned general secretary of the Popular Front for the Liberation of Palestine:

“Whether the name is Mumia Abu-Jamal, Walid Daqqa or Georges Ibrahim Abdallah, political prisoners behind bars can and must be a priority for our movements. These names illustrate the continuity of struggle against our collective enemy — their legacies of organizing that reach back to the anti-colonial liberation movements of the 1960s, 1970s, 1980s, to today. Political prisoners are not simply individuals; they are leaders of struggle and organizing.”

People at all these events protested Mumia’s continued imprisonment, and they celebrated his 40 years of resistance behind bars as a leader in the struggle for Black liberation and human freedom. Free Mumia NOW!

Gloria Rubac and Betsey Piette contributed to this article.