Multiple issues confront the U.S. capitalist economy during the continuing COVID-19 pandemic. Of major impact is the global supply chain crisis which has exposed long-existing problems within the capitalist system. 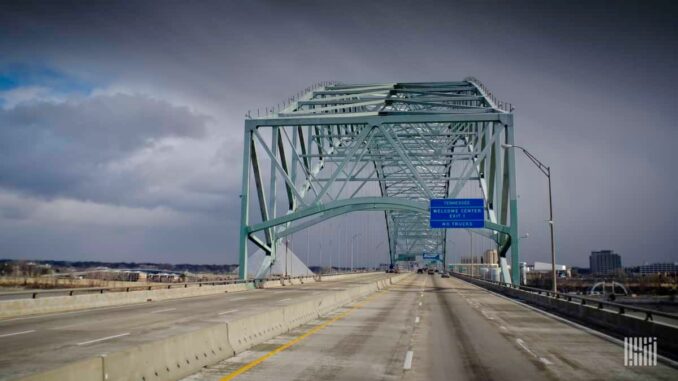 The I-40 bridge, which carries 60,000 vehicles daily over the Mississippi River, was closed for three months in 2021 because of failing infrastructure.

During the last 40 years, corporations have maximized profits by globalization — moving production abroad for the lowest wages. Now Big Business is coming up against big problems in moving goods produced abroad into and through the U.S., where workers are increasingly unwilling to labor under unsafe conditions for insubstantial pay.

Maritime workers are refusing to spend months confined on cargo ships with limited safety precautions and unable to visit their families. There is a shortage of transport workers willing to drive trucks for low pay, long hours and under unsafe conditions to move goods from ports. The trucking industry faces an annual 90% plus turnover.

Underlying the situation is a decades-long reluctance of capitalist politicians to fund domestic infrastructure improvements necessary to keep up with the demands of global production.

Meanwhile, wars abroad have been funded eagerly. According to Costs of War, over one-half of the federal government’s total assets — buildings, aircraft, ships, vehicles, computers and weapons — benefit the military. The Pentagon’s total assets increased in value from $1.1 trillion in 2000 to $1.8 trillion in 2019. (tinyurl.com/yae7zwjm)

Military spending is currently 3.4% of the U.S. GDP, while combined federal, state and local spending on infrastructure is 2.3%. In comparison, China’s infrastructure spending was 10 times higher than the U.S. in 2018. (tinyurl.com/25jf6fu4)

Historically the U.S. government has prioritized improvements in supply-chain infrastructure, when those benefited the U.S. military. The Civil War significantly increased the use of railroads. In January 1862, President Abraham Lincoln gave the U.S. Military Railroad, established through the U.S. War Department, the authority to seize control of the railroads for military use. The USMRR restricted its authority to Southern rail lines captured during the war, giving the North a strategic military advantage over the South.

Construction on the first transcontinental railroad began soon after the war and was completed in May 1869. The expanded rail system played a significant role in the westward expansion of U.S. imperialism, including the theft and occupation of Indigenous lands and the genocide of Indigenous peoples, as well as the near-annihilation of the native bison, or buffalo species.

Nearly 90 years later, construction began on the first transcontinental highway. In 1956, during the Cold War with the Soviet Union, President Dwight D. Eisenhower signed legislation to fund construction of the interstate highway system, officially known as the National System of Interstate and Defense Highways. Between then and 1990, around 45,000 miles of new interstate roads were constructed as part of the interstate highway system, using $119 billion in federal funds. (tinyurl.com/yhebjyce)

As an Army Lt. Colonel in 1919 after World War I, Eisenhower had observed the First Transcontinental Motor Convoy, a military experiment in moving troops from coast to coast in the U.S. The 3,200-mile caravan from Washington, D.C., to San Francisco confronted a patchwork system of paved and unpaved roads, aging bridges too low for trucks to pass under and mountain roads too narrow for two-way traffic.

As the Allied commander in Europe during World War II, Eisenhower observed the far superior German Autobahn system, which included national highways connecting all parts of that country. The Allied armies were able to take advantage of the European highway systems to rapidly move troops, helping win the war.

The first automobiles in the U.S. were manufactured in 1899, yet the widespread use of cars was not enough to propel construction of a mammoth coast-to-coast highway system. Instead, the proposal was fueled by the “Red Scare” — the perceived threat of nuclear war after the Soviet Union developed an atomic bomb as protection against the U.S., which had used this weapon in Japan in 1945.

In 1954, Eisenhower appointed West Point-trained engineer Lt. Gen. Lucius Clay to promote the highways. The “Clay Committee” pushed the multibillion-dollar plan by generating public fear and arguing the highways were essential for emergency evacuation of large cities and quick movement of troops in the event of a nuclear attack. Vice President Richard Nixon mentioned the threat of atomic war 10 times in a 1954 speech to governors. At the time 79% of the U.S. public believed a nuclear conflict between the U.S. and the USSR was imminent.

Touted as “modern marvels,” the interstate highways resulted in the forced removal of over 475,000 households to make way for construction of the system. A majority of those displaced lived in low-income urban communities with high concentrations of Black, Latinx, Indigenous and immigrant people.

Fifty years of aging and neglect

Military interests served to promote domestic infrastructure development during the rise of U.S. global imperialism, but over time military spending became a drain on resources vital for domestic programs. Nowhere is this more evident than in the current state of U.S. infrastructure.

Constructed mid-20th century, the roads and bridges — deteriorating for years — rarely receive any major upgrades or reconstruction. The American Society of Civil Engineers in a “2021 Report Card for America’s Infrastructure” gave U.S. highways a C- grade. The ASCE report found 43% of public roadways in poor or mediocre condition.

Over 231,000 bridges in all 50 U.S. states need repair and preservation work. On May 11, the Interstate 40 Mississippi River Bridge, one of only two Mississippi River crossings near Memphis, closed due to a crack in a major steel beam. The bridge, which carries 60,000 vehicles daily, was closed for three months, also impacting hundreds of river barges that travel under the bridge.

Since the completion of the interstate highway system, the highest one-year amount of government spending for infrastructure improvements — including both transportation and water — came in 2016 under President Barack Obama, with $342 billion contributed by state and local governments and $98 billion from the federal government.

The U.S. population has more than doubled since the 1960s, when most of the country’s major highway infrastructure systems were designed. The country’s transportation network currently hauls over 51 million tons of freight — valued around $52 billion — every day over a system of largely antiquated roads and bridges never built to handle that volume. At the same time, the lack of adequate public transportation has left the U.S. population more dependent on cars to get around using the same roads.

Too little too late

Concerns over inadequate infrastructure funding and the impact on the U.S. economy surfaced over 15 years ago. In 2005 the U.S. Congress created the National Surface Transportation Policy and Revenue Study Commission to evaluate transportation conditions, which were determined insufficient to meet rising demand for trade and goods movement. In its 2008 findings, the commission recommended “a substantial national commitment to transportation investment of at least $225 billion annually from all sources for the next 50 years.”

Accounting for inflation, today it would require spending over $4.3 trillion to catch up to that proposed investment. This allocation never happened.

In November, Congress approved President Joe Biden’s infrastructure bill that contained a meager $1.2 trillion investment over 10 years. Only $115 billion is designated for roads, bridges and other transportation projects; $130 billion of the bill will go to transit systems to benefit parcel delivery industries like Amazon, FedEx and UPS — adding to the volume of vehicles using the same antiquated highway system.

A legitimate question is who will pay for the critically necessary infrastructure improvements?

For decades local governments have funded highway improvements through taxes and tolls that negatively impact the working class. It’s time to shift the imperialist military budget to domestic needs and to make corporations, which have reaped profits from using the public highways, pick up their share of transportation costs with back payments for all the years they never contributed.

Next: Roads vs. rail