A volunteer group of union members from across the U.S. has developed an online map of the union-busting industry. The map lists both companies and the union-busting firms they hire for thousands of dollars per day to turn workers against unions. Take a look at laborlab.us/unionbustingtracker, where LaborLab pinpoints 180 instances as of Nov. 28. 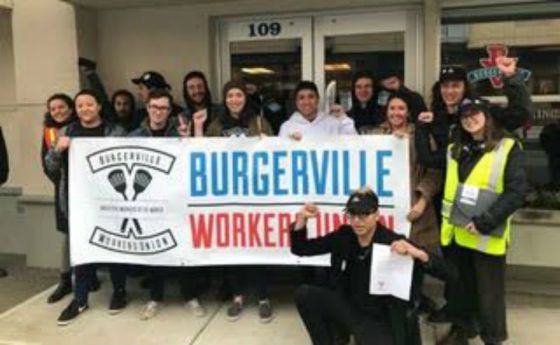 Bob Funk, the founder of LaborLab.us, says, “A shocking number of young people think unions are illegal and don’t know their rights.” This tool is meant to bring attention to how companies and union-busting firms blast workers with misinformation and scare tactics, to deter them from voting yes to union representation. Amazon hired Rock Creek Consulting to undermine the 2020 union drive at its warehouse in Bessemer, Alabama, and smaller firms also engage in union-busting tactics. Funk said he was most surprised by how many hospital corporations hire union-busting firms to prevent frontline health care workers from joining a union and gaining the bargaining rights they desperately need. (tinyurl.com/y9nza4z2)

When workers at the Refresco Beverage Company in Wharton, New Jersey, realized how the pandemic was impacting their health and welfare on the job, they staged a walkout and demanded adequate protection and contact tracing. Emboldened by that action, the workers began a union drive and 15 months after their initial walkout, won an election, certified by the National Labor Relations Board, to be represented by the United Electrical, Radio and Machine Workers (UE).

This was a hard-fought win. Refresco Beverage is an international company that bottles and distributes big-name products like Coca-Cola. The majority of the workers at the Wharton plant are Spanish-speaking, and the company hired a “union-avoidance” consultant, Lupe Cruz, who specializes in bilingual anti-union tactics. The company mandated employees attend sessions, where Cruz used ethnic and linguistic differences to confuse and scare immigrant workers.

Alejandro Coriat, a Hilton Hotel worker, calls it intersectional union busting. He described how Cruz’s tactics are based on exploiting workers’ language and ethnic origin. Fortunately, the Hilton workers won their union vote anyway, as did the Refresco workers. The fight for the beverage plant workers isn’t over, however, since Refresco is appealing the NLRB decision. The employees on the union organizing committee are not discouraged and are preparing for steward elections and eventually contract negotiations. (​​tinyurl.com/yckzjfx7)

Burgerville workers have a union contract

As reported by Workers World in 2019, “Burgerville Workers Union, based in Vancouver, Washington, and an affiliate of the Industrial Workers of the World, struck four Burgerville stores for four days, forcing the company to return to the bargaining table. BVWU is the first-ever, fast-food workers union in the U.S. This was the second BVWU strike since 2017, when the union forced the company, through a three-day strike, to recognize it.”

Fast forward to 2021: Burgerville Workers Union has a tentative contract! Union organizers expect ratification before the end of 2021. BVWU represents workers at five of the 40 Burgerville locations, but the company stated it will apply the contract to all, regardless of location. Wages will increase to a minimum of $15 an hour, and the company will institute credit-card tipping at drive-through locations. It’s estimated tipping will raise the hourly wage by $2. Stable scheduling and vacation pay were additional gains won in the contract, with workers able to get a three-month work schedule. “That will give long-term security to workers to know how much money they’re making, what their hours are going to be, what they have to plan for if they have children,” union organizer Mark Medina said. (tinyurl.com/2p8wws35)