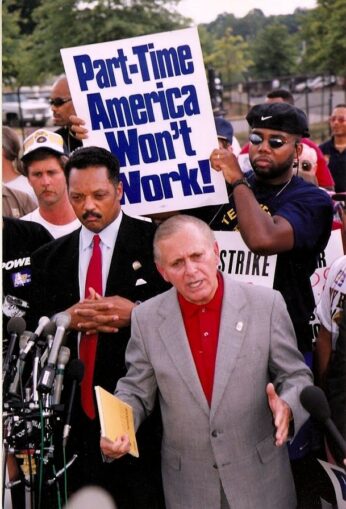 This was the first win since 1996 by a candidate for union president backed by Teamsters for a Democratic Union. After militant, anti-corruption leader Ron Carey won reelection to a second term that year, he went on to lead the successful UPS strike a year later. The strike pushed back attempts by UPS management to expand the lower-paid, part-time workforce.

O’Brien, like the late Carey, is not a TDU member, but TDU supported the OZ slate as part of the broader Teamsters United effort. The president and the rest of the General Executive Board are directly elected by the rank and file.

A key issue in Vairma’s defeat was the way the Hoffa administration handled negotiations with UPS in 2018. A majority — 54% — of the 250,000 UPS Teamsters voted against the contract, which created a lower pay scale for newer workers and allowed UPS to subcontract more work. But, applying the union’s “two-thirds rule,” the bargaining team was able to declare the contract ratified, because less than two-thirds of UPS members voted to reject it.

The union’s convention, held earlier this year, voted to eliminate the two-thirds rule in their constitution. A priority of the new team is reversing contract concessions at UPS when the current contract expires in 2023.

The break by the rank and file with Hoffa — who has held the reins of power since 1998 — is part of a broader trend in the working class, expressed by strikes and unionization drives. Workers want to fight, and they want and need fighting unions. 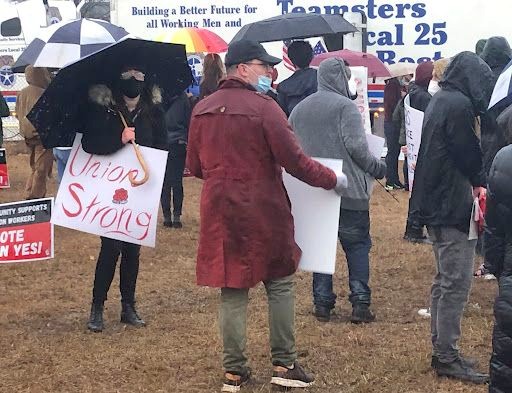 Teamsters Local 25 truck, in background, at Feb. 6 rally in Bessemer, Alabama to support union drive. Local 25 President and now Teamsters International President Sean O’Brien arranged for the truck to be there.

Taking on Amazon is a stated priority for O’Brien. As president of Greater Boston’s Teamsters Local 25, he has pushed City Councils in Boston and surrounding communities to pass resolutions calling on Amazon to adhere to specified labor standards; the union must be consulted before a new facility opens. “Now,” O’Brien said, “as a result of this [union] election, we’re going to be in a better position where we can use our influence to do that nationwide.” (Boston Globe, Nov. 19)

During the union drive at the Amazon warehouse in Bessemer, Alabama, O’Brien drove a truck emblazoned with the Teamsters emblem to a rally in Bessemer.

In 2020 the union appointed a National Director for Amazon. At the Teamsters national convention in June, delegates passed a resolution stating it “recognizes the existential threat of Amazon to our members and commits all levels of the union to unite with core platforms of member engagement, worker and community engagement, antitrust enforcement and policy reform, and global solidarity.” (teamster.org)

One aspect of a multipronged strategy against Amazon is, according to O’Brien, winning a good contract and reversing concessions at UPS. “Our biggest selling point to potential members is showing in black and white what a union contract can do,” he said. (Labor Notes, Nov. 18)

Getting rid of two-tier at UPS, where new hires’ starting pay is currently below what Amazon workers make, would undoubtedly help win Amazon workers to unionization. But there is a crying need for representation at Amazon now, not when the UPS contract expires in 2023. Organizing Amazon has a “do-or-die” urgency for organized labor comparable to winning against General Motors in 1936-37.

Hopefully, now that the election is over, the union will immediately move forward with the commitments made in June.