By Tony Murphy and John Catalinotto 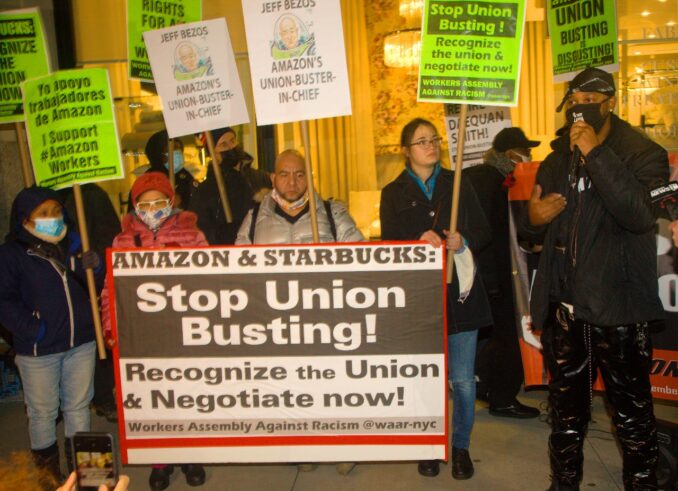 The day after the U.S.’s Thursday holiday in November — known as “Black Friday,” because it recognizes a profitable outcome for retailers, putting them “in the black” — is now a “tradition” in all capitalist countries. Their ruling class treats human beings as expendable, as merely spending consumers and production workers. 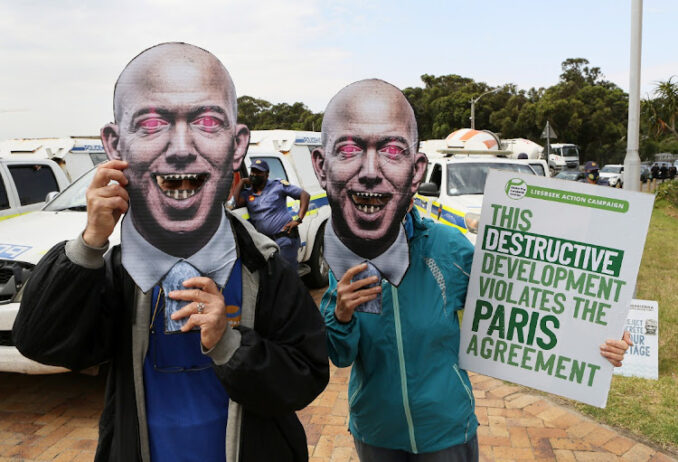 Demands focused on Amazon’s harsh exploitation of workers and their bodies; the company’s environmental crimes and nonpayment of taxes were also targeted. A major demand is “Make Amazon pay.”

Worldwide, nearly 50 organizations have signed on to a list of “common demands,” published by the Make Amazon Pay coalition, which include:

In Britain, the environmental activists of the organization Extinction Rebellion demonstrated before a series of Amazon warehouses. In Italy and Mexico, workers walked off the job. Protests took place in Argentina, Bangladesh, Brazil, France, Germany, South Africa, the Netherlands and other countries.

Amazon is known for being the biggest online retailer, but it produces some of what it sells, allowing Amazon’s owners to exploit another layer of workers, those manufacturing, rather than transporting, commodities. 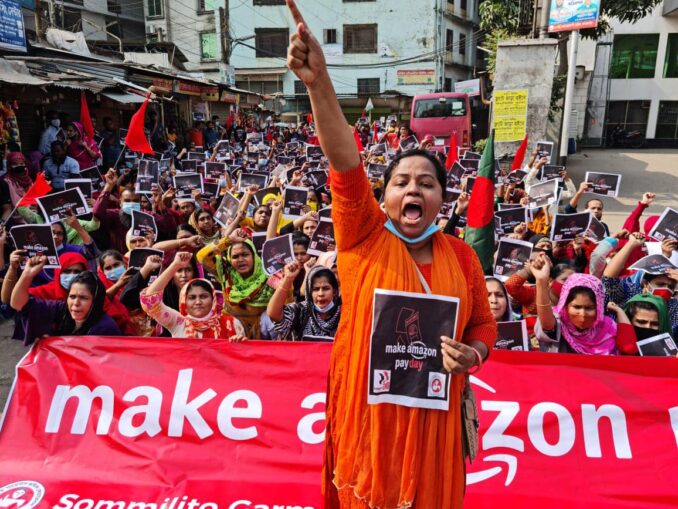 The Sommilito Garments Sramik Federation, headquartered in Dhaka, demonstrated in Bangladesh on Black Friday, under the slogan ‘Make Amazon Pay!’

Protests were scheduled by unionized garment workers in Bangladesh in two cities, Dhaka and Chittagong. In Cambodia, garment workers who had worked at a factory that closed in March 2020 called a rally to demand $3.6 million in severance pay.

In New York, the Workers’ Assembly Against Racism (WAAR) held an assembly at 5th Avenue and 26th Street in front of Amazon boss Jeff Bezos’ $119-million residence. The assembly focused on the campaign to win union recognition for Amazon’s U.S. workforce. 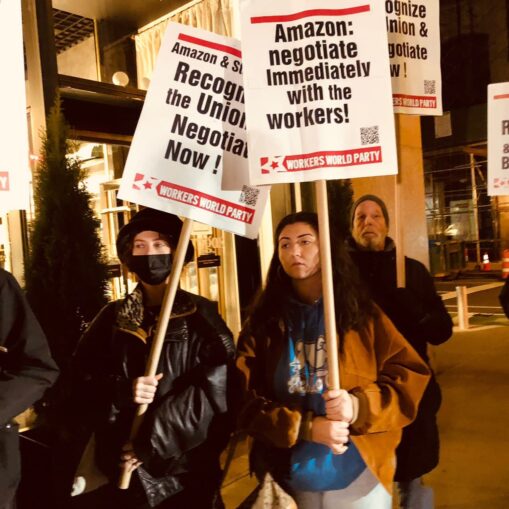 Protesters carried placards of caricatures of Bezos and Schultz, with the words “Union-Buster-in-Chief” on them. They demanded that Amazon and Starbucks bosses stop union busting and immediately recognize the unions being organized by their workers.

It’s rare that union organizing gets broad media coverage in the United States. Maybe because it was Black Friday, or maybe because people in the U.S. woke up to the news that protesters overseas had begun blocking entrances of Amazon warehouses, but much more media than usual covered the New York action. 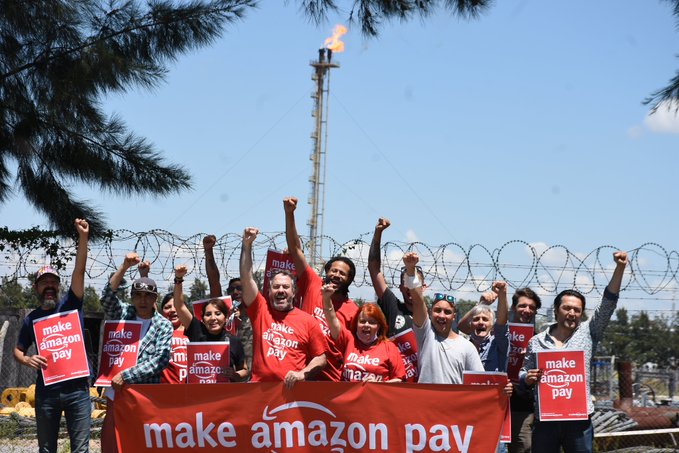 In Buenos Aires, Argentina, a Black Friday demonstration was held at the Axion oil refinery against Amazon’s services to fossil fuel corporations.

In the Federal Republic of Germany, where Amazon’s warehouse workers have union membership, the United Services Union (Verdi) called for strikes. The union reported that several thousand Amazon workers refrained from working. Verdi has been holding strikes at Amazon during the holiday season for the last eight years, demanding that workers there be paid the industry average for logistics workers, instead of Amazon’s lower average wage.

Verdi leader Sylwia Lech in Augsburg says the workers are exhausted from the grueling work. Those who Amazon’s managers consider too slow are called in to be grilled and asked things like, “Is anything wrong today?” and “Can we help you [work faster]?” She considered Black Friday “a horror.”

Amazon employees earn “significantly less than in other retail companies, among other things due to lower bonuses, a low Christmas bonus and longer working hours.” The company still refuses to negotiate with Verdi, “but we won’t let up,” said Verdi federal trade group leader Orhan Akman. The demand is for “the recognition of the collective agreements of the retail and mail-order trade, as well as a collective agreement for good and healthy work.” (Junge Welt, Nov. 27-38)

In France, one of the country’s top labor unions, CGT, called for Amazon workers in the country to strike. As reported in the Nov. 26 issue of L’Humanité, not everyone is happy about the big sales planned for Friday. A coalition of 70 unions and organizations including Greenpeace, Friends of the Earth, Attac and Oxfam called for a strike.

The Make Amazon Pay union coalition reported a strike in Italy, where up to 15,000 delivery workers were prepared to strike for 24 hours. Last spring thousands of warehouse workers and drivers struck. In September, unionized warehouse workers in Italy reached their first-ever direct agreement with Amazon after staging a 24-hour work stoppage. 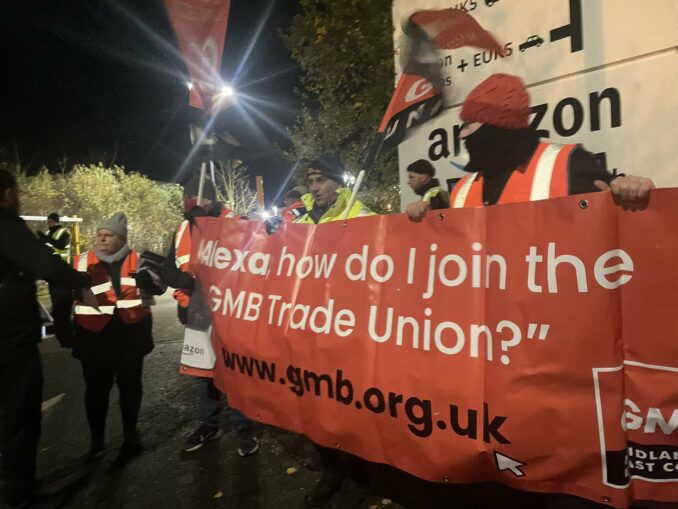 Warehouse, tech and delivery workers of GMB Union demonstrated on Black Friday in Britain at multiple sites, teaming up with the Trades Union Congress, International Transport Workers Federation, War on Want and Labour Behind the Label, in the ‘Make Amazon Pay’ coalition.

Warehouse, tech and delivery workers planned protests in several cities in Britain to demand union recognition from Amazon. Although workers there have the legal right to freely associate with unions, Amazon has refused to negotiate with any, including the 600,000-member GMB general trade union.

In Cape Town, South Africa, a community organization was set to protest at the construction site of what will be Amazon’s African headquarters. 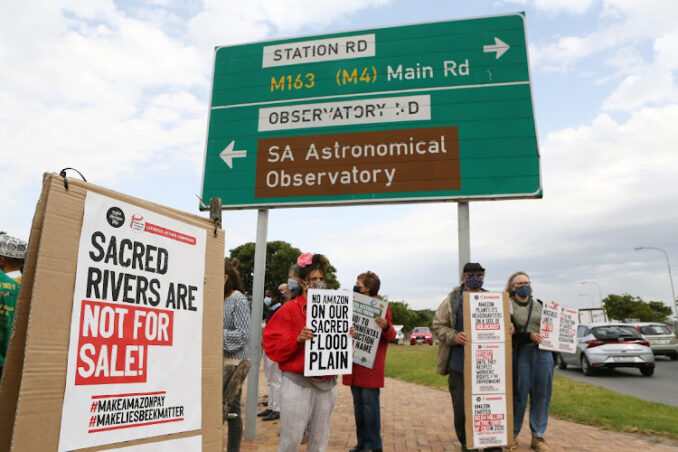 In Cape Town, activists protest outside the location scheduled to be Amazon’s headquarters in Africa.

In a separate protest, the Extinction Rebellion environmental group blocked the entrances to Amazon distribution centres in Britain, targeting 13 buildings, including the largest one in Dunfermline. It planned similar actions in Germany and the Netherlands.