The following slightly edited testimony was presented by Dr. Johanna Fernandez, an associate professor of history at Baruch College of the City University of New York. She is also the author of the book, “The Young Lords: a Radical History.” Dr. Fernandez spoke at the Oct. 23-25, 2021 “Spirit of Mandela” International Tribunal held in New York City. Read more about the tribunal at workers.org/2021/11/59858/ and workers.org/2021/11/60163/. 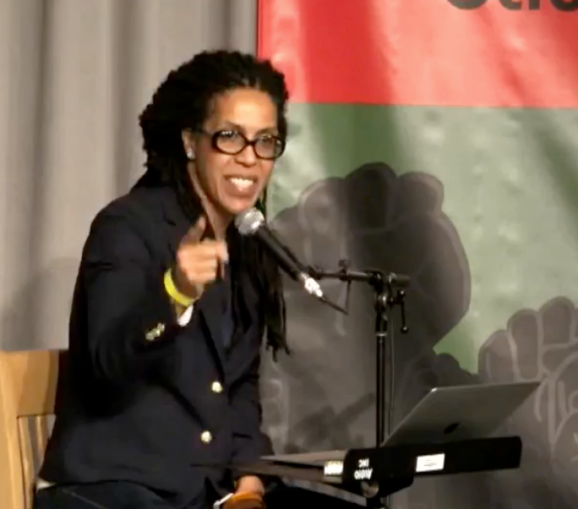 The origins of hyperincarceration today can be found in the 1960s with political imprisonment. And to understand the level of repression unleashed against Civil Rights and Black Power movement organizers, we have to understand what the state would be leaving on the table if Black people prevailed in America in the 1960s.

First of all, the post-World War II period was an era of wars and revolutions against European colonial rule, and Black radicals were making common cause with those colonized countries. And so for the United States, the repression of an organization like the Black Panthers was about winning the Cold War. But then we have to take a step back and think about what else was at stake for the United States. Why did the United States go after Civil Rights and Black Power movements? People that we celebrate today in many cases?

And I would ask, what usually happens to the losing side in a revolution? It gets decapitated. But in the United States, the losing side was invited back to remake society, and that had massive consequences for how Black Americans live today. That class, the old slavocracy, launched a counterrevolution to regain their wealth and power. And what was at stake? The labor of 4 million enslaved Africans, which essentially had produced in the South the second wealthiest society humanity had seen, second only to the wealth of the British Empire.

So the bloodthirsty counterrevolution sought to control Black labor and return the Southern economy to as close a replica as possible to slavery. So the slavocracy essentially launched a multipronged campaign that included the birth of the Ku Klux Klan, which is a terrorist organization which recruited white people of all classes as its foot soldiers. The old slavocracy also joined both political parties, the Democratic and Republican parties in the South, disenfranchised Black people, poor white people too, and established Jim Crow.

And for the next century, white Southerners carried out pogroms against Black people as a matter of communal ritual. I’m saying all of this because that’s essentially the system that was held up for a hundred years. The important thing about this is that unlike authoritarian rule or dictatorship, fascism depends on a large swath of the population to carry out the interests of the state, and what we have in the South is a fascist rule for over a hundred years.

Fascist societies deploy terror against people, against citizens. And that’s what we have, what we see happening, in the South and in the North. When the Civil Rights movement emerges in the South, Southern politicians have to somehow save their fascist system, so they launch a campaign of law and order to criminalize the likes of Martin Luther King, whom we celebrate today, SNCC workers, Fannie Lou Hamer and others.

In the aftermath of World War II, a war allegedly fought against Nazi Germany, the slavocracy essentially had to restrain its language, so it had to use law and order as the code word for “exterminating the brutes” in America. But that was the language that essentially sics the police, the carceral state, against those who were resisting authority.

Law and order became the language to bring Black people resisting racial apartheid to heel. Politicians concocted, at the same time, a moral panic around crime that linked Black resistance to crime. In the North, the Democratic Party, supposedly the friend of Black people, embraced the same language of the criminalization of Black protests after the rebellions of 1964, 1965 and especially 1967 in the North.

The Black Panther Party argued that the real problem in American society was racial apartheid undergirded by an economic system, and therefore there were going to have to be deeper economic and political changes if Black people and other people in this country were going to see freedom.

They pointed out that deindustrialization was tearing apart Black America, that Black people had been excluded from the unions and well-paid jobs. That Black people of all classes had been trapped in the Black ghetto as a result of de facto racial segregation that kept them out of decent housing now and that they were being displaced now by urban renewal, which was that era’s gentrification project.

And they argued that Black people were subjected to the savage inequalities of neighborhood schools and hospitals and summarily lynched in the streets by the police. They were saying all of this and saying that there was going to have to be a restructuring of America, if Black freedom was to be achieved. And they were saying this at the time of the Vietnam War, when the Vietnamese people were defeating U.S. empire in Vietnam.

This challenge to the United States was too deep for the U.S. to withstand, and so the United States in the 1960s cranked up its apparatus of repression, killing dozens of Black Panthers extrajudicially, including Fred Hampton and Bob Clark, through the counterintelligence program of the FBI. Its politicians passed a series of carceral laws, including the crime bill of 1968, which made it possible to wiretap without a court order, legalize stop and frisk for the first time in American history and expand the power of the police to keep Black people in their place and to bring rebellious Black people to heel.

They passed the H. Rap Brown Law in 1968, which made it illegal to cross state lines to give a speech. If you look closely, the decade of the 1960s ended with the arrest and criminalization of Black radicals. The movement turned from a movement for jobs, against discrimination and police violence, toward a movement to free our activists, our leaders, people who were fighting to defend themselves against the homicidal campaign that the state launched against them; and their people were essentially imprisoned.

Contrast this to the white supremacists who took over Congress on Jan. 6, who have mostly gotten fines. So after the state unleashed a campaign of repression against Black radicals in the 1960s, after they convinced Americans that this was good law and good policy, in the 1980s and ’90s, they generalized these policies against the majority of Black and Latinx people, who were now extra bodies in the context of deindustrialization. These people now needed to be warehoused.

The objective of my remarks has been to illustrate the ways in which what we know today as the largest carceral nation in the world emerges, not randomly in the 1980s and ’90s; it emerges out of a campaign unleashed against the freedom fighters of this country, who civilized American society in that period, Black radicals.