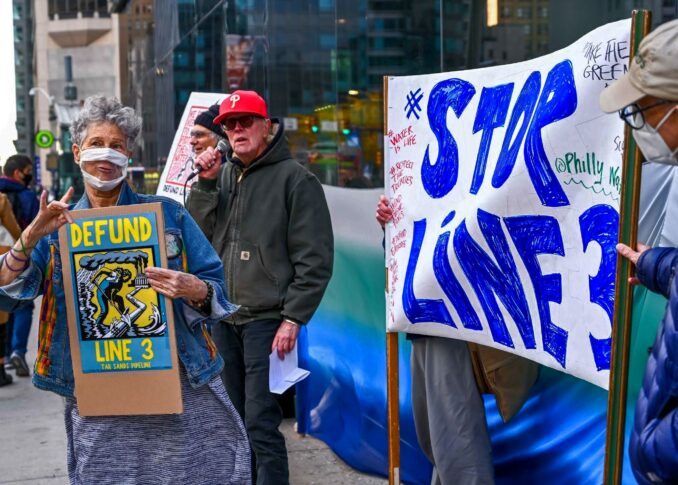 Protesters chanted, handed out flyers to passersby, performed a “Follow the Money” skit and listened as speakers condemned TD’s environmentally damaging policies. They celebrated the decision by the Folk Arts — Cultural Treasures Charter School to close all their accounts and withdraw over $1 million from TD Bank to protest the bank’s role in funding Enbridge’s Line 3 pipeline and other fossil fuel projects.

TD is the largest financial backer, with $9.59 billion invested, of Enbridge’s Line 3 Pipeline, a steel tube that will transport 760,000 barrels of oil per day, 1,100 miles from the tar sands of Alberta, Canada, to a storage terminal in Wisconsin. It will cross more than 200 water bodies, including the Mississippi River twice, as well as sensitive watersheds, ecosystems and pristine northern Minnesota landscapes.

Despite significant grassroots and legal resistance, construction continues in Anishinaabe territory. If built, Line 3 would contribute as much damage to the climate as 50 new coal-fired power plants and would endanger more than 800 wetlands and 200 waterways.