This article was published in Granma Nov. 18 and republished in CubaNews after translation. The protest actions that U.S.-backed counterrevolutionaries attempted to organize in Cuba Nov. 15 flopped. The anti-revolutionary Cuban playwright, Yunior Garcia, who is a major figure in this article, has since its publication left Cuba and sought exile in Spain. 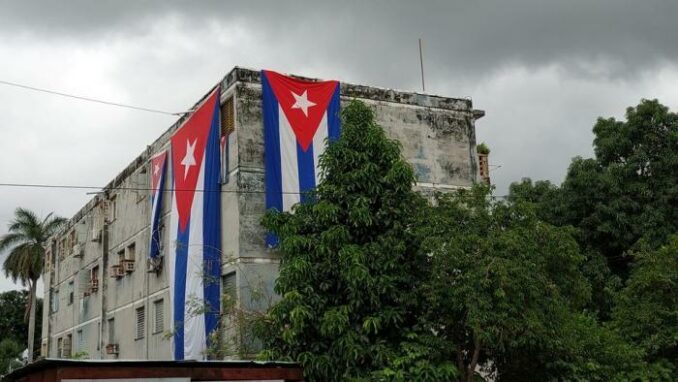 Signs of pro-socialist sentiment in Havana, in the neighborhood where a U.S. sympathizer lived before opting for exile in Madrid after Nov. 15 actions flopped.

Not at 3:00 p.m. on Nov. 14, nor at any time on Nov. 15, did Cuba’s people allow someone spoon-fed by the foreign nation that has most harmed the homeland to disrupt our tranquility with the taste of war, or replace our peace with revenge, a revenge that has been festering over more than 60 years as a result of our irreverence toward U.S. edicts. And we express ourselves only a few miles from the same Yankees who, using similar pretexts and similar plans, have bombed peoples in the Middle East and encouraged hatred and violence in Our America.

The fact that events announced for Monday, Nov. 15, bear not a trace of authenticity or spontaneity has been made clear by the 29 public statements from U.S. authorities. Add to this their logistical support, courses for the training of agents of change and a media operation mounted on social networks from U.S. territory, using bots to falsify reality.

We [Granma journalists] arrived in the La Coronela neighborhood of La Lisa, where Yunior Garcia lives, on Sunday afternoon, Nov. 14. Garcia is the latest manufactured ringleader attempting to front a process of political destabilization in Cuba. This was the day on which he had announced plans for a performance in which José Martí’s anti-imperialist loving rose was to be sullied.

“Nobody is paying me to be here,” said young Eduardo Guisado Castellanos, a self-employed worker, speaking with us live on Granma’s Facebook page. Guisado firmly insisted that he was there to defend the Revolution, into which he was born and in which he intends to be when he dies.

“I came to tell Yunior García, the mercenary, who is hiding many things behind the pacifism he claims to defend: The homeland is being given away, the tranquility we have always had, our unity as Cubans,” said the young man. In reference to the news circulating about what might happen in the community, he said that he was no soldier, he wasn’t “repressing” anyone; he was only “a resident who is defending his neighborhood and supporting his people.”

“We’re not fascists; we are the people, people who defend our victories, true to Fidel, to the death. They brag that they are willing to shed their blood . . . from Miami. There are young people here who are willing to give our own lives for the homeland. Let them understand that very clearly,” he added.

He reported that the foreign press had interviewed him, asking what he is doing there, to which he answered: “We know that there are people, wage earners, who may join him, and we are avoiding a people-to-people confrontation.”

“There is an atmosphere of tranquility here,” Solangel Arró La O, another resident, told our cameras, from a site near the building displaying the most flags in all of La Coronela.

Arró La O warned us about the effect that posts circulating on social networks might have on citizens, which is why she made sure to convey security to the parents of the children attending the local elementary school, sending them a message of confidence in the reopening of schools, protected by their teachers and the entire community. [Schools had been closed because of COVID.]

Teacher Yulexi Aponte Mendoza told us that he came out to remind the agent Yunior Garcia of Fidel’s teachings, those that have allowed our people to reach this Nov. 15 with the pandemic under control, with the several vaccines that have been developed in Cuba, and children returning to school.

During our live interview, a doctor, dressed in white, a color the counterrevolutionaries have attempted to misappropriate and add to their 15N symbols, addressed the construction of Yunior Garcia’s leadership, nonexistent in the community where the doctor has lived for more than 25 years.

Barbara Corrales Arce is the family doctor who, based on her life experience, warned young people not to let themselves be manipulated by what they see on social networks, assuming that something is real that may not be real at all.