Global solidarity for striking Alabama coal miners ramped up with a Nov. 18 worldwide Day of Action.

This kicked off early Nov. 16 when the Tonight Show featured a tribute to striking workers with Tom Morello of the legendary Rage Against the Machine and Canadian-American singer-songwriter Grandson. Belting out “Hold the Line,” the musicians flipped through placards boosting the UMWA strike, as well as recent actions by steelworkers, dairy workers, teachers and nurses: “Nobody said it happens overnight, But if you’re looking for a sign, Remember everybody that stood up before you. And, oh! Hold the line!”

On strike since April 1, the Brookwood, Alabama, United Mine Workers members are holding on in their fight against Warrior Met Coal, which is backed by global hedge fund BlackRock. As Haeden Wright, president of UMWA Auxiliary Locals 2368 and 2245, said in a Oct. 31 Twitter broadcast, the struggle is over “higher compensation, better benefits, better holidays — on every front of the contract. We’ve been making them millions of dollars!” 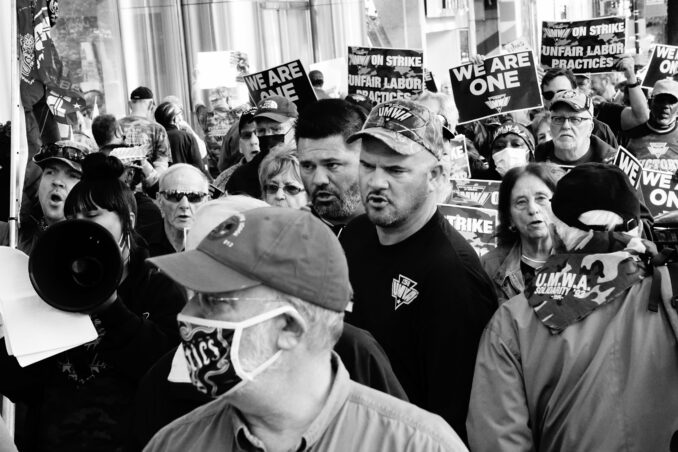 Alabama anthracite coal is low sulfur coal, exported to China and other countries to use in steel production for energy-generating wind turbines. The Brookwood miners have received substantial support from Alabama conservation organizations because of their contribution to green energy.

Now miners have used the global connection to take their fight from rural Alabama to the rest of the U.S. and to countries worldwide.

During the Nov. 18 Day of Solidarity, coal miners, other labor union members and supporters demonstrated on the steps of Alabama’s capitol in Montgomery. On the other side of the world in Queensland, Australia, 50 Construction, Forestry, Mining and Energy Union (CFMEU) members raised their fists to show support from the largest union of workers in those industries in the country.

In New York City, Alabama miners were joined by members of the Retail, Warehouse and Department Store Union and the Communications Workers in front of BlackRock’s main headquarters in Manhattan. RWDSU support was especially meaningful, as that union is spearheading historic organizing at the Bessemer, Alabama, Amazon warehouse, less than 30 miles from Warrior Met mines.

In Latrobe, Pennsylvania, miners demonstrated in solidarity outside Xcoal company headquarters. The Allegheny-Fayette Central Labor Council commented on Twitter that Xcoal buys coal that Alabama workers risk their lives to mine and protested Warrior Met Coal’s refusal to provide fair wages, affordable health care and reasonable time-off for its workers.

Protests were held at BlackRock’s subsidiary, Fidelity Investments, at K and 19th Streets in Washington, D.C. — a center of Big Business wheeling and dealing. Union support came from the Association of Flight Attendants-CWA, AFL-CIO President Liz Shuler, American Federation of State, County and Municipal Employees, and the Metro Washington Labor Council. Another protest was held outside Fidelity Investment in Boston with solidarity from the AFL-CIO and Massachusetts Community Labor United.

In Denver, Colorado, UMW members and allies brought the giant inflatable rat of anti-union shame to a rally outside the office of Griffis Residential — whose Chief Operating Officer Tom Barta has substantial ties to anti-union Big Coal. 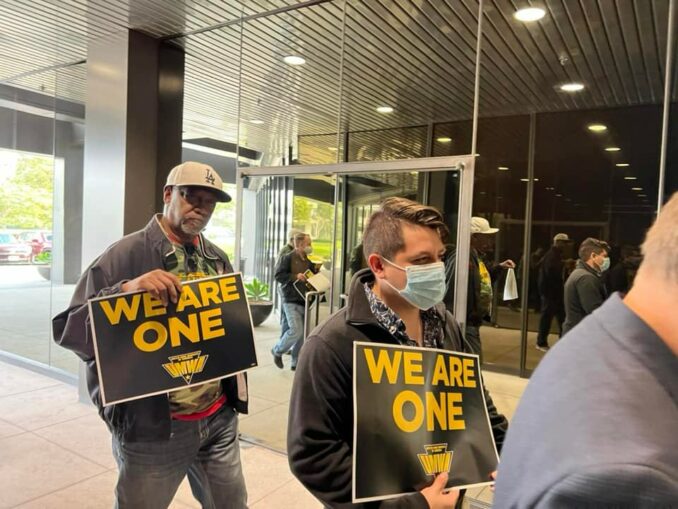 In Newport, California, two dozen people demonstrated outside the BlackRock corporate office. Ralliers wore UMW camouflage shirts to their “Class War” and held signs with the Alabama miners’ slogan, “We Are One.” The Orange County Labor Federation sent several delegations from different unions. Orange County Supervisor Katrina Foley addressed the crowd: “We’ve been through so much in the last 21 months. That we cannot get a company that is employing people who are doing the most difficult work — life-threatening work, health-threatening work — to support their workers is just tragic.” (Los Angeles Times, Nov. 18)