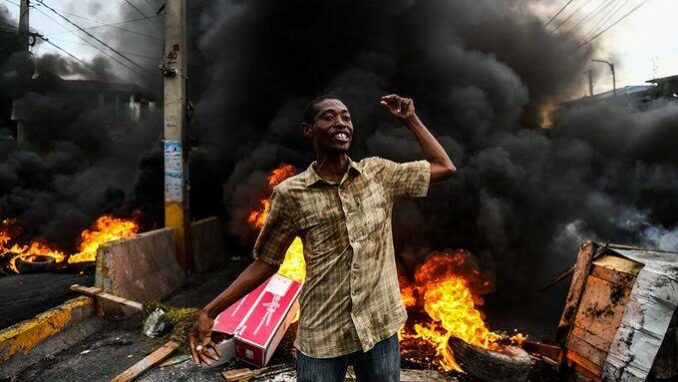 Protest against fuel shortages and to demand the resignation of President Jovenel Moise, Port-au-Prince, Haiti, Sept. 20, 2019.

Nov. 21 — Nearly 4.4 million Haitians need immediate food assistance, and 1.2 million suffer from extreme hunger. Washington has recognized that conditions for the masses in Haiti are so dire that the U.S. government extended protection against deportation for Haitians already living in the U.S. by 18 months.

That decision omitted Haitians who attempted to enter the U.S. during September and October; people deported from the United States by ICE were predominantly Haitian.

Tens of thousands of Haitians who lived and worked in Latin America, mainly in Chile and Brazil, have lost their jobs because of a recent economic downturn. They see the United States as a haven to survive in but presently out of reach. The number of Haitians trying to cross the border in November fell precipitously, when Haitians realized the Biden administration was hostile to Haitian refugees. (Washington Post, Nov. 11)

Some Haitians have applied for asylum in Mexico. Others are congregating in northern Colombia and Panama.

According to the U.N.’s International Organization for Migration (IOM), the U.S. deported 800 children to Haiti between Sept. 19 and Nov. 4. These children, born of Haitian parents outside of Haiti, were not Haitian citizens and had never been in Haiti. The U.S. Customs and Border Protection agency has offered no legal justification for this move.

There are tens of thousands of Haitians in the Dominican Republic, which shares the island of Hispaniola with Haiti. They work in the sugar fields, construction and the tourist industry. To pressure the Haitian community, while avoiding labor shortages in Dominican industries, Dominican immigration authorities are deporting pregnant Haitians and those who have recently given birth.

Numerous organizations, from the IOM to popular organizations in Haiti and the Dominican Republic, denounced these expulsions as inhumane. Dominican immigration authorities have been following the U.S. anti-immigrant example.

About a month ago, 16 U.S. citizens and one Canadian from the Christian Aid Ministries (CAM) were kidnapped by a local paramilitary force called 400 Mawozo. The CAM website announced Nov. 21 that two of their kidnapped members had been released and were in “excellent spirits.”

No details — such as names, pictures or home towns — were provided. CAM has released no additional information about either of the people just released or those still being held. This is an unusual policy and leads to speculation.

Jen Psaki, Biden’s press secretary, said that the White House and the State Department would have no comment on the story. She did acknowledge the day after the kidnapping that the FBI and other agencies — most likely the CIA — had significant assets in Haiti. According to the Miami Herald, the two released were adults with medical problems, and no ransom was paid.

According to Christianity Today’s November issue, many of the missionaries — who provide education and medical services that the Haitian state doesn’t — have been leaving. Their decision is not just because of the kidnapping, but because of the multiple physical attacks on pastors and stern warnings from the State Department to leave.

On their way out, these religious leaders are using the opportunity to call for the United State to boost its support for the Haitian police and army.

What the Haitian people need from workers and progressives in the United States is solidarity and understanding of the tremendous oppression they face, oppression that U.S. intervention caused in the first place.