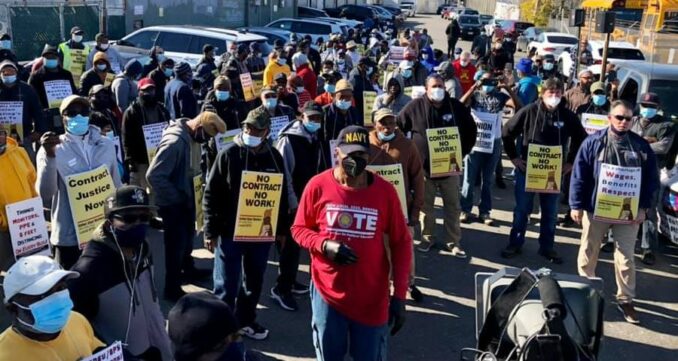 Boston, Nov. 14 — Banging drums and chanting “No contract, no work,” hundreds of Boston school bus drivers from far-flung yards converged on their employer Transdev’s office during their Nov. 9 morning break. With a week to go until their contract expires, Boston School Bus Drivers, Steelworkers Local 8751 drivers and their supporters blockaded the street and entrance to the billion-dollar, transnational corporation’s headquarters for two hours in a dress rehearsal showing their intention to strike.

Darlene Lombos, secretary treasurer of the Greater Boston Labor Council, opened the “Contract Justice Now!” rally championing “the dangerous work of you essential, frontline workers during the pandemic. You have a right to better wages, benefits, retirement and respect for your service to the children of Boston.”

Lombos referenced the five deaths, including four Local 8751 members, and many COVID-19 illnesses in the school bus operation since the March 2020 lockdown. At that time union drivers organized delivery of tens of thousands of meals to Boston children and their families.

This week a spike of delta COVID-19 has begun to close schools in the district again, with rapid spread to the bus yards where a surge of breakthrough cases, sickness and quarantines has hit drivers, monitors and dispatchers.

John Buonopane, Steelworkers’ staff representative, brought leaders of USW locals who were recently victorious after being locked out by National Grid Energy Corporation to the rally. He said, “We demand extended COVID-19 full pay and benefits for our hardworking members who have sacrificed so much. Our physical and financial health and safety is the only thing that can keep this school system running. Without it, the system will completely shut down.”

Local 8751’s spiritual advisors Bishop Felipe Teixeira and Imam Abdullah Faaruuq inspired the crowd, recounting many instances of Local 8751’s solidarity with struggles in their communities. Imam Faaruuq led the crowd from atop the Dorchester Art Project’s truck singing The O’Jays’ legendary “Got to Give the People What They Want!”

With Boukman Eksperyans, Street Dogs and Bob Marley’s songs of struggle blaring from DAP’s truck, workers danced around the picket line in a militant, festival-like display that bosses peeking out their windows could see. Workers World Party’s young activist singer Kristen Turgeon fired up the rally belting out the coal miners’ anthem, “Which Side Are You On?”

André François, Local 8751’s three-term elected President, spoke to the members’ seething anger at Transdev’s weekly pay shortages, constant discipline harassment, refusal to negotiate and brutal pandemic working conditions. François condemned “Transdev bosses who continue to sit in their cozy offices counting their big paychecks, while drivers and monitors are forced to burn our own gas to survive all day outside in Boston’s freezing and rainy weather.”

The union’s near 1,000-strong workforce are predominantly immigrants from Haiti and Cape Verde. They took up President François’ call with repeated chants of “Transdev, you will know! Union busting’s got to go!”

François congratulated mayor-elect Michelle Wu, saying, “We are optimistic that when Mayor Wu takes office next week, her campaign promise to be the workers’ rights mayor for all can force Transdev to do the right thing and avert another school bus drivers’ strike.”

Ten-year veteran driver Dulande Florestal told Workers World: “We are suffering. We can’t afford to pay rent, buy food for our families and commute to work with prices going so high. They say there’s a shortage of school bus drivers. Look at Brockton and all the other districts raising wages to $30 and more. If Transdev wants to keep us driving, they have to pay for it.”

In the greater Boston region, Governor Charlie Baker has called in the National Guard to drive school children in cities and towns whose drivers earn significantly less than those in Boston. Boston officials rejected such a military solution, because Local 8751’s contract agreements would allow the union to fight non-union replacements. (Boston Herald, Oct. 7) 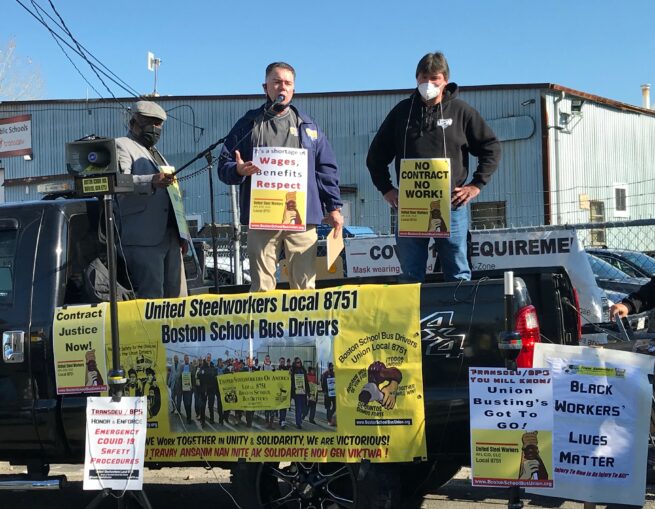 Kirschbaum blasted the city government for its disrespect and negligence in siding with Transdev. “When Transdev, then called Veolia, first came to town in 2013, their first act was to fire the union’s leadership and frame us up in court with charges that could lead to 30 years in prison. We beat them back then with our solidarity and determination to shut them down.

“The city of Boston continues to give Transdev a sweetheart deal of total cost pass-through. The city has a very short time to intervene to avoid catastrophe.”

On Nov. 2, in a landslide against an opponent whose racist program included more cops and attacks on students’ right to transportation, Wu became the first woman and person of color ever popularly elected to mayor in the 400-year history of this hometown of U.S. settler colonialism.

Wu’s campaign included the program of housing and health care, not jails, for houseless people who use drugs. It also supported the Black Lives Matter movement’s demand to fund social services with money from bloated police budgets. Wu reflected the progressive mood of Boston’s now majority communities of color.

The Steelworkers’ contract expires, coincidentally, one day before Mayor Wu takes office. The usual January swearing in was unexpectedly pushed forward to Nov. 16.

As strike signs are being printed, Local 8751 has found itself in round-the-clock negotiations with various sectors of Boston’s ruling class based on Local 8751’s strike preparations, which have received front-page coverage. Whatever developments the next days’ struggles bring, this union’s ranks proved in their first test of strength that the only road to survival and a better world is to join the national wave of strikes, job actions and resistance organizing against big capital.