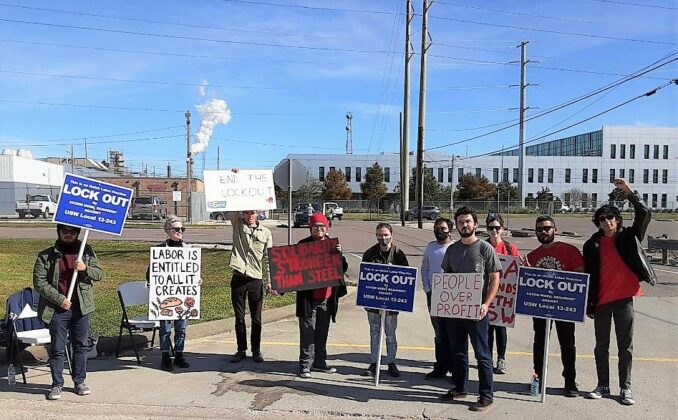 Nov. 13 — On May Day this year about 650 union workers, members of Steelworkers Local 13-243,  showed up at the Exxon refinery here only to discover that this billion-dollar company had locked them out.

Contract bargaining had come to a standoff, with Exxon demanding concessions that would undermine safety and job security, as well as putting the community at risk.

USW Local 13-243 oil workers are fighting one of the largest and most powerful corporations in the world. In the first quarter of 2021 alone, the company recorded $2.7 billion in revenue. Exxon’s latest attempt to break the union is by demanding that the NLRB hold a decertification vote, with ballots mailed to all union workers a few weeks before Christmas.

On Nov. 13, activists from Houston were organized by the DSA chapter, and a carpool from Houston went to walk the picket lines. Steelworker Richard Lanndry explained to the Houston activists that the union wasn’t even asking for a raise but had refused to make concessions on safety issues and job security.

“Right now the bosses and a few others are working at the refinery, but the production is way, way down,” Landry said. “They are going to lose this decertification vote. We know that for sure.”

Other trips from Houston are being organized to stand in solidarity with the workers challenging Exxon-Mobil. It may look like David fighting Goliath, but as the workers’ song says, “The union makes us strong.”