Although French President Emmanuel Macron has announced that his government is winding down its intervention in Mali, French imperialism is still carrying out an active policy of raids and assassinations. Mali’s people are resisting. 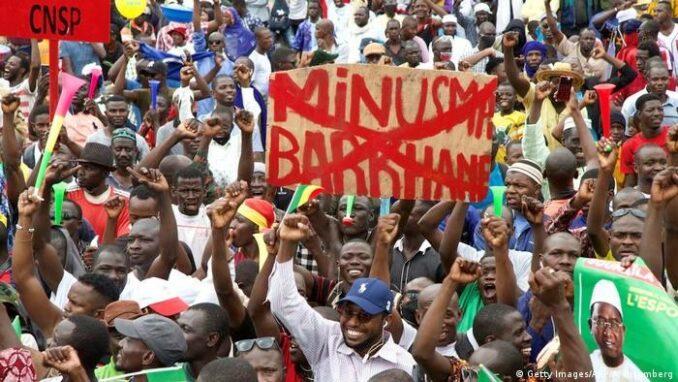 The United States is supplying France with intelligence and logistical support and has announced it is intensifying its sanctions against Mali. AFRICOM, the U.S. military command for Africa, has had training missions in Mali for years. The U.N. has a stabilization force of 14,000 in Mali, called MINUSMA. This is a major military asset given that Mali only has 22 million people.

The Economic Community of West African States has also announced it is intensifying its economic sanctions, because Mali will not call for elections during the next six months, defying what ECOWAS has demanded. This is a very serious sanction since ECOWAS countries surround Mali.

There are reactionary armed bands operating in western Sahel — Mali, Burkina Faso, Niger — all former French colonies — especially in the area where all three countries touch. Each armed band claims allegiance to a tendency in Islamic thought. They attack civilians, the armies of each country and French and U.S. special forces, and sometimes each other. There are also groups of smugglers — of drugs and cigarettes — and remnants of movements seeking the independence of northern and eastern Mali.

There were two significant demonstrations in Mali during the last weeks of October.

The first one, Oct. 25 in Gao, was especially significant because Gao, the last port in Mali on the Niger River, is in the area of Mali where for months there have been multiple armed attacks. Still the M5-Rally of Patriotic forces was able to gather a peaceful march from the Monument of Martyrs to the office of the regional executive.

Alassane Guitèye, the chairperson of the M5 Youth, at the rally expressed his movement’s support for the policies of the Transition Council, which has been subjected to “unprecedented pressure from the international community” against holding a national convention to reestablish and reconstitute a sovereign Mali.

Guitèye raised some local problems ranging from the supply of water and electricity to the state of roads linking Gao, which is in the eastern part of Mali, to other towns.

Brigade General Moussa Traoré, the regional executive, welcomed the march, saluted its patriotism and said he would pass along their concerns.

Another demonstration took place in Bamako five days later. Tens of thousands of people came out on the streets Oct. 30 at the call of the movement Yèréwolo (the dignified men) Standing on the Ramparts and M5.

Mohamed Ousmane Ag Mohamedoune, vice president of the Collective for the Reestablishment of Mali and member of the ruling National Transitional Council (CNT), spoke: “This historic event is an essential step in the restoration and affirmation of the national sovereignty of our country, Mali. . . . We say no to the interference of the international community, in particular the interference of France through its policy of dependence, its policy of colonization and contempt.” He also told ECOWAS to stop acting as an echo chamber for French politicians.

At the end of Mohamedoune’s speech, the crowd chanted in support of the military officers who are running the transitional government: “Down with France! Down with French media! Down with RFI (Radio France International)! France, out! French army, out! Long live Russia!” (maliactu.net, Nov. 1)

Mali’s government is trying to hire Russian military technicians. The French foreign and defense ministers just held a meeting Nov. 13 with their counterparts in Moscow and told the Russians that sending Russian troops to Mali was unacceptable to France.