On Nov. 5, ACT UP Boston, labor leaders, frontline harm reductionists, housing advocates, contingents of students, folks who have been houseless and people who use drugs converged on City Hall for a protest press conference and speak-out. Days earlier, city officials began waging their “sheriff’s plan,” setting up kangaroo courts, trashing tents and jailing people who had been living in a large encampment in the city’s Newmarket neighborhood. 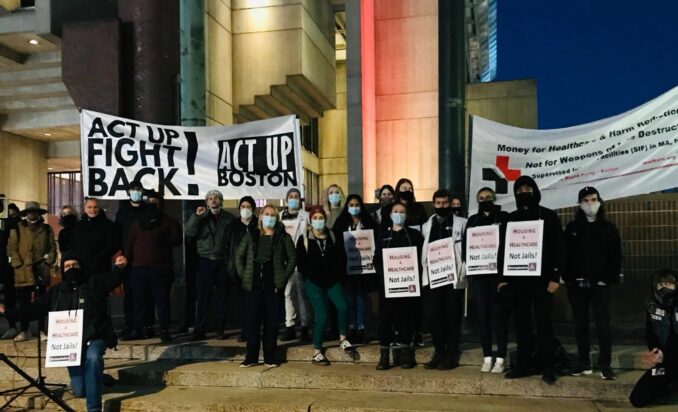 For weeks prior, corporate media spun the city’s planned attack of jailings, theft of personal property and shelter destruction with daily breaking news of so-called “humanitarian intervention” and a “path to treatment.” Sensational headlines were scripted by Massachusetts Gov. Charlie Baker’s “Mass & Cass Task Force,” which includes police, prosecutors, city officials and corporate and nonprofit CEOs, drowning out medical professionals and legal experts who cautioned that death is often the result of locking people up.

Opening the press conference, Grant Patch, a harm reductionist and ACT UP member, declared, “What is happening right now, mere miles away from here near the intersection of Massachusetts and Melnea Cass avenues [Mass & Cass], is nothing less than a human rights violation!”

Leslie Credle, executive director of Justice4Housing, blasted the city’s police tactics and described people being kidnapped and disappeared, forced into shelters run like military barracks and dying at the Suffolk County House of Corrections. “We observed the city of Boston take a role as a bully. The Boston Police Department targeted people who were seeking treatment in line at methadone clinics and needle exchange programs They targeted people who were getting help.”

Credle pointed out that the state can always find money for the police and the Department of Corrections, but never for a social response, and stressed that we need long-term solutions where there will be a sustainable impact in our communities. Credle ended by calling for a moment of silence for Ayesha Johnson who died at the Suffolk County jail this past summer, waiting for a bed for alcohol treatment.

ACT UP says ‘Join the struggle!’

The organization called on “all organizations and individuals to join us in demanding public health solutions and social supports instead of further violence, neglect and criminalization!” (ACT UP Boston Facebook)

Labor leaders like Gerry Scoppettuolo, a founder of Pride at Work Eastern Massachusetts, called out the role of the Newmarket Business Association, which has blocked transitional housing and supervised consumption spaces in the neighborhood, instead planning to hire private security and fund mass surveillance while championing “a clean sweep.”

Steve Gillis, an officer of United Steelworkers Local 8751, the Boston School Bus Drivers’ union, said, “Our members are on the side of those demanding: ‘Housing and health care, not jails!’ One hour of Jeff Bezos’ profits from his Amazon warehouse at Newmarket could provide housing and medical care for everybody in the neighborhood.”

‘We will defend our class!’

Brian Shea, a leader of Workers World Party and the Disability Justice and Rights Caucus, extended solidarity to ACT UP, Justice4 Housing and all the organizations defending those living at Mass and Cass, who are facing the full weight of state violence. He said: “These attacks are not simply a ‘bug in the system,’ but a central feature of capitalism that grinds our class down and traumatizes people.

“The profits for the landlords go up, and people can no longer afford their housing and get thrown out. People are living any way they can; they are living on the street and putting up tents in public spaces. Now the state is taking away public space and criminalizing people who are Black and Brown or do not have a house. This system of capitalism is what does that; it’s built in.

“Our class creates the wealth that the rich take for their own. Our class creates and builds everything. Every brick in this City Hall Plaza was put in by workers. Every building you see was created by members of our class. We will continue to defend our class living at Mass and Cass. We are organizing — we are acting up and fighting back.”

Shea concluded: “We will take back this system that we have created, and we will create a socialist system that organizes for people’s needs, where housing and health care are not commodities, where the state apparatus does not chew people up and spit them out. We can do this and we will. We are putting the sheriff, cops, Jeff Bezos and the billionaires on notice that we are coming — because there are more of us than there are them. Act up, fight back!”

Rounding out the evening, ACT UP member Sahaira Lopez spoke from her experiences of being houseless: “I have seen how the shelters treat people. . . . We are human beings and deserve to be treated with respect. Me and my husband slept right here at City Hall several times in the winter. Houseless people experience inhumane and disrespectful treatment in the shelters every night.”

Lopez stressed: “Today I have housing, and I’m glad. As a person in recovery, I say yes to housing and public health care. I would be dead or overdosed if I did not find housing. I was houseless on the street for almost three years. Thank you for giving me this opportunity to share what I have been going through. ACT UP and fight for our rights!”

More on this struggle in Workers World, Oct. 28, “ACT UP Boston demands ‘Housing & health care, not jails!’ and at ACT UP Boston: Linktr.ee/actupboston.