Nov. 6 – More than 200 community activists marched through West Philadelphia today in the 21st “Peoplehood” event organized by Spiral Q theater group. Many participants carried or wore flags, banners, papier-mâché puppets, costumes, child-sized cardboard houses and even a cardboard mailbox, in pageantry focused on uplifting the many struggles of global working and oppressed communities. 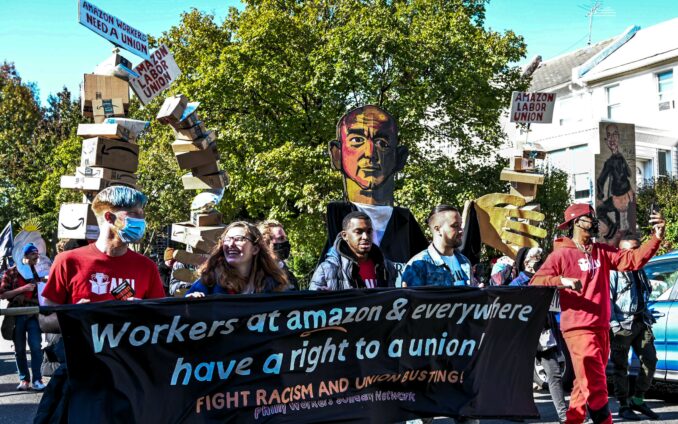 The “Peoplehood Parade” is a celebration allowing participants to express creativity and community concerns while taking to the streets to celebrate Philadelphia’s diversity. Participants who gathered at the historic Paul Robeson House at 50th and Walnut streets represented many struggles, including against racism, gender oppression, food insecurity, climate catastrophe and voter suppression, and for Indigenous rights–including the Palestinian struggle against Israeli apartheid–housing, union organizing and more. To the rhythm of percussion drummers, participants marched a mile and a half through diverse neighborhoods to Clark Park at 45th and Chester streets. Community residents turned out along the route to welcome the parade.

Workers World Party marched with a contingent in support of union organizing at Amazon, organized by the Philadelphia Workers Solidarity Network. This contingent’s lead banner was carried by members of the Amazon Labor Union who have been organizing at the company’s Staten Island, N.Y., warehouses.

Over the last six months, the ALU has successfully built a workers’ committee, signed up more than 2,000 workers in support of a union, and filed Oct. 25 with the National Labor Relations Board to hold an election, which could come as early as mid-November.

Amazon whistleblower-turned-union-organizer Chris Smalls, who lost his job for calling out unsafe conditions at a warehouse during the COVID-19 pandemic, participated in today’s march.

The Amazon contingent drew considerable attention with its 10-foot-tall puppet of the company’s former CEO, centi-billionaire Jeff Bezos. Another graphic painted on wood featured an image of Bezos defecating while saying “Only the best compensation for my employees!! I’m full of it.”

Rising above the waters

Spiral Q co-directors Jennifer Turnbull and Liza Goodell, along with numerous volunteers, worked with each participating group to decide the focus their contingent could take and how to best reflect that through their creative art.

This year’s “Peoplehood” was achieved despite a severe setback. In early September, remnants of Hurricane Ida flooded a warehouse housing Spiral Q’s massive collection of giant papier-mâché puppets and other materials. Between 65-70% of more than 2,000 artifacts were destroyed or damaged beyond repair, along with supplies, computers and other equipment.

The general theme of today’s event was “rising above the waters” – an acknowledgement of the recovery from the flood damage and the resiliency of community struggles. During the week leading up to “Peoplehood,” volunteers rushed to construct the final “float” of the parade–a large wooden boat, still advancing.