The following is part of a presentation given by Johnny Hodgson, Sandinista National Liberation Front’s Political Secretary for the Autonomous Region of the South Caribbean (RACCS), on Oct. 6 in Managua, Nicaragua, to a U.S. delegation comprised of Coleen Littlejohn, Sara Flounders, Monica Moorehead, Joav Elinevsky and Stan Smith. The transcript is slightly edited. Read the whole article at workers.org/2021/12/60471 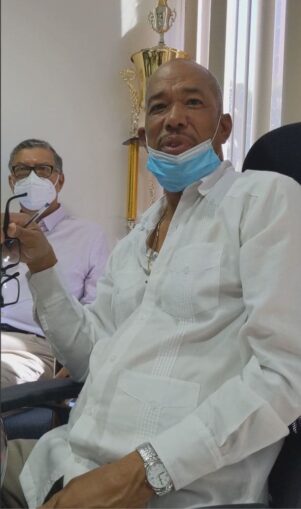 Nicaragua historically has been a divided country, divided by the colonial powers. What we know as the Pacific Coast today was a Spanish colony. What we call the Caribbean coast today was a British protectorate. So due to these circumstances, the presence of the Europeans, they were curious to have an alliance between the British and the Natives, an alliance to fight against the Spanish. The Spanish were on the Pacific coast, the British on the Caribbean coast. The British made an alliance with the Natives to fight against the Spanish.

But the British there on the Caribbean coast said, “No, we don’t want anything to do with that document that was signed there. We are happy here. We are doing good here. We have everything we need here. We have all we need to repair our ships. When we throw our nets, we catch so much fish that the nets are tearing. We have enough honey to sweeten our drinks.” They even mentioned, “We have all we need to satisfy our sexual appetite.” Yes, they mentioned that! So they say we’re not going anywhere. But the Spanish have a document saying that they are the owners of that territory, and they’re claiming it. So in 1786, they had what they call the London Convention, where they ratified the Treaty of Paris, saying that this territory belongs to Spain. But they didn’t only ratify it. They put the timetable establishing that if the British didn’t get out of the Miskitu shore before the 10th of April of 1787, they will become subjects of the Spanish crown. They will have to obey their enemies. But even with that, the British waited until the last minute to move out. So practically they had to come and move them all out. They had to come from England to move all these British and take them to Belize.

When we became part of Nicaragua, it was a tough time. We called it the ‘Time of Imposition’ because Nicaragua began to impose authority, to impose new laws, etc. It was a real rough thing, a horrible thing for the people of the Caribbean coast that historically exercised a different level of self-government. Even though it was a British protectorate we exercised a different level of self-government, we had our own kings, our own laws, et cetera. So the territory was incorporated into Nicaragua, but not the people. Nicaragua said, ‘That territory is mine. Those resources are mine, they’re Nicaraguan.’ But the people? We were never recognized as Nicaraguan. The Nicaraguan Constitution established a mono-ethnic country, a country with one language. The official language of Nicaragua is Spanish. So we were living there, but we were invisible. We weren’t in the Constitution. We were excluded from everything economically and socially.

I came to Managua to study in 1972. In the 1970s, it was very difficult for someone to come from the Caribbean coast to study here. We didn’t have any university on the Caribbean coast so you had to come to Managua. So that year that I came, two of us were able to come to study at the agricultural university. And when we got a break, we used to speak Creole. Some of the guys would come and say, ‘Hey, you can’t be talking that thing here.’ And I used to fight back and say, ‘No, I am a Nicaraguan, I have rights and I can speak my own language.’

‘I read the Constitution from A to Z’

So I took the Constitution and I began to read it and I read it from A to Z. And I didn’t find not one word saying that I am Nicaraguan or that the language that I speak had any value or anything like this. And I thought that maybe I had read it too fast, so I went over it again. I read it two times, and when I realized that I wasn’t in the Constitution, I cried.

I was brought up to be tough. I was brought up in a school where they said, “Men don’t cry,” you know? But I cried because I couldn’t believe that I had to come to the university to find out that I wasn’t even in the Constitution. In Spanish, they have a phrase that translated into English that says, “There is no evil that can last a hundred years, and there is nobody that can’t resist it.” So that was 1972, and in 1979 we had the triumph of the revolution.

Next: Sandinista Revolution changed everything