Prisons, jails, and detention centers hold many survivors of violence, and these brutal institutions themselves reproduce that violence. One of the many ways they do so can be understood through the lens of people being criminalized simply for defending themselves against gender-based violence.

Under international law, gender-based violence (GBV) includes: (1) any violence perpetrated against a person or groups of people on account of their gender identity or sexuality; (2) violence that is disproportionately inflicted against such groups; (3) acts of sexual violence. It includes acts that inflict physical, mental or sexual harm or suffering, threats of such acts, coercion and other deprivations of liberty, and harm inflicted in public or in private. Both private and state actors can inflict gender-based violence. GBV also includes economic abuse. (survivedandpunishedny.org, tinyurl.com/2bhkx6k9)

According to “Mass Release Now: New York State’s Obligation to Deliver Reparations for Criminalized Survivors”: “Despite the abundance of evidence confirming that economic precarity increases the risk of GBV, there is pervasive neglect of low-income survivors’ heightened material needs. Survivors in Black, Latinx, Indigenous and other communities of color tend to face even greater material needs, following centuries of U.S. policies that furthered the displacement, exploitation and economic disinvestment of these populations.” The report continues: “Poverty, exclusion, and inadequate systems of support create the conditions for insecurity that expose individuals to interpersonal violence and set in motion their contact with the criminal punishment system.” (tinyurl.com/2bhkx6k9)

According to data compiled by the ACLU, about 67% of women in prison in the U.S. are women of color. Black women’s incarceration rates for all crimes increased by 800% since 1986, compared to an increase of 400% for women of all nationalities. In Montana, Indigenous people are 6% of the population but Indigenous women constitute approximately 25% of the total female prisoner population. (tinyurl.com/n2d6746j)

Not only are Black, Latinx and Indigenous women and other gender oppressed people detained at high rates disproportionate to their share of the population in prisons, jails, and migrant detention centers, but their oppressions also interlock with other oppressions based on sexual orientation, disability, income and more.

People who find themselves at the intersection of multiple oppressions face increased vulnerability to the criminal punishment system. The LGBTQ2S+ community is particularly vulnerable because they are more likely to become subjected to a cycle of exclusion and poverty which in turn exposes them to the risk of violence. For example, among Black transgender people, nearly half (47%) have been incarcerated at some point. (National Center for Transgender Equality, 2012)

Individuals are not the only perpetrators of gender-based violence. Recently 70 women and transgender people being held at Rikers Island jail in New York City signed a petition condemning the plan of Gov. Kathy Hochul and Mayor Bill de Blasio to transfer them to Bedford Hills Correctional Facility or Taconic Correctional Facility. (Bronxdefenders.org, Oct. 18, 2021) Rikers ‒ like many jails, prisons, and detention centers ‒ is experiencing an acute public health and human rights crisis during the pandemic. Rikers, like many city jails, is overcrowded, unsanitary and filled with thousands being detained pretrial.

The petition decried the transfers to far off state prisons as a so-called solution to the overcrowding and made the connection between state and interpersonal violence. “How does making female detainees more isolated and less able to meet with counsel, court advocates, and visitors address the emergency?… If you’re going to declare an emergency, we insist that the government shoulder the burden, not the women who are already subjected to lengthy detention.” (Bronxdefenders.org, Oct. 18, tinyurl.com/3rjbm3h2)

In the handwritten petition another person said: “A tolerable solution is to negotiate release conditions, not to further bury chronic violations of due process. Don’t be another perpetrator of domestic violence – silencing us, hiding us, abusing your power…The state’s incompetence is not our emergency.” (tinyurl.com/xc6ufm67) 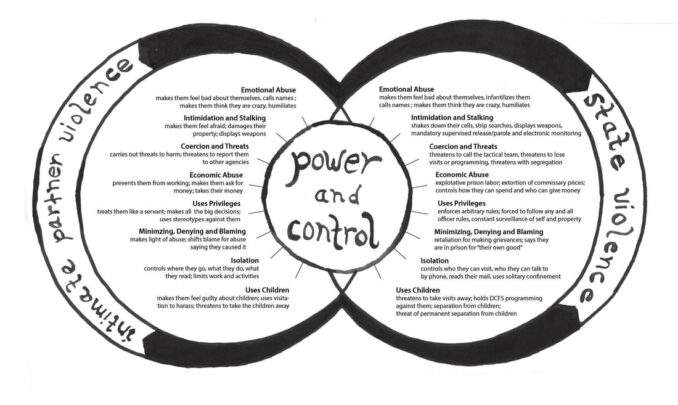 Fighting back against gender violence

In what is currently known as the United States, human rights for those other than white, land-owning men have had to be won by oppressed peoples through struggle. The case of Joann Little provides an earlier example of movement powered fightback pressuring courts on stolen land to recognize the right of women and gender oppressed people to fight back against abuse.

“In August 1975, Joann Little, a 20-year-old African American woman, fled her jail cell in Beaufort, N.C., after killing the white deputy sheriff who had attempted to rape her. Little used the jailer’s ice-pick weapon against him in her desperate struggle to resist. When Little surrendered to authorities, citing self-defense, she was arrested and put on trial for murder. The historic campaign that saved Little from execution or life in prison was the first successful U.S. struggle to assert the right of African-American women to self-defense against white rapists.” (Workers World, March 9, 2006, tinyurl.com/3w8amw3y)

It should be mentioned that, in addition to Joann Little’s case, the struggles and fightback in support of Yvonne Swan Wanrow, the New Jersey 7, the San Antonio 4, CeCe McDonald, Bresha Meadows and the MOVE 9 have had significant wins and proven mass movements as credible threats in resisting our oppressions collectively.

How profit and gender-based violence go hand in hand

Perpetuation of gender-based violence is a form of social control which has aided the accumulation of capital in the hands of a few. Vanessa Bolin, an Indigenous artist, activist, street medic and founder of the Eyes Wide Open Project, Richmond Indigenous Society, and River City Medic Collective, addressed the Carrizo Comecrudo Tribunal for Human Rights in May 2020. Bolin explained that sites of oil extraction that bring in men to work not only desecrate the land but also particularly contribute to murdered and missing Indigenous women, girls and Two Spirit relatives. She further explained that gender-based violence against Indigenous people has been ongoing since colonizers first arrived on the continent.

Criminal punishment has not and will not reduce the prevalence of gender-based violence or the economic, social and political precarity for survivors of that violence. Even the Centers for Disease Control recognizes that a guarantee of economic security “holds great potential for improving a wide range of health outcomes for neighborhoods, communities and states and also has the potential to prevent IPV [intimate partner violence].”

Rather than locking up and punishing survivors of gender-based violence we can instead address root causes and take community centered approaches to alleviate suffering to truly transform current conditions.

In Cuba, through organized community bodies like the Committees for the Defense of the Revolution (CDR) and the Federation of Cuban Women (FMC), “neighbors often intervene directly with abusers. According to one expert’s estimate, they do so in at least 90% of cases involving family violence. Furthermore, neighbors may bring perpetrators to FMC programs, and they frequently report abuse to family doctors, who rely on social workers to investigate and offer services. Neighbors may also involve CDR officials, or even the police, at times. However, most individuals contact authorities for the purpose of encouraging the perpetrator to enter into an informal contract whereby he agrees to obtain help and change his behavior.” (tinyurl.com/3anz7wer)

Justice is what we build with others. Workers and the oppressed of the world unite, same struggle, same fight!

Phebe Eckfeldt and mYia X contributed to this article.