The following Nov. 3 press statement by the Secretariat of the Central Committee of the Sudanese Communist Party was made available Nov. 4 on Twitter by
لحزب الشيوعي السوداني ​​@Communist_SD. The statement has been lightly edited.

The coalition to which the SCP belongs announced national strikes and civil disobedience to take place Nov. 7-8 under the slogan “No negotiations, no compromise, no power-sharing,” and promised mass protests until a civilian government leads with full civilian rule. The coalition firmly rejected certain internationally backed initiatives that civilian groups return to power-sharing with the military that committed the Oct. 25 coup. 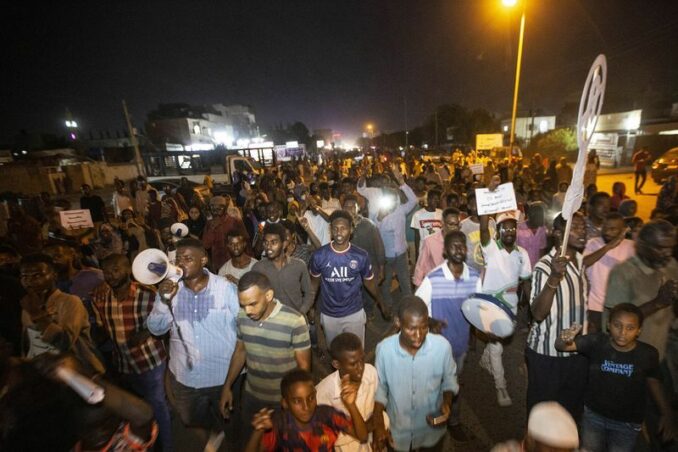 The Secretariat of the Central Committee of the Communist Party has followed the developments in the political scene and praises the valor and courage that led to millions marching in the capital and other cities in Sudan and across the world on Oct. 30. We believe in retribution for the righteous martyrs and the necessity of bringing those responsible for crimes to justice. We also wish the wounded and injured a speedy recovery and demand the release of all detainees.

The Oct. 30 demonstrations raised the bar for mass demands beyond opposing the coup to calling for a total restructuring of the state by establishing a democratic civilian government.

The crisis manifested in the Oct. 25 coup shed light on the fragility of the relation between the civil and military sides of the transitional authority… . These struggles, the most recent of which is the current coup, seek to block and hinder the rise of the mass movement and the glorious December Revolution.

The truth is that all of these initiatives and committees revolve around recycling the same military and civilian transition [forces], ignoring the actual change that the people seek.

Success of these scenarios will prolong and exacerbate the state of tension caused by the coup, and will not present a national project that addresses the underlying causes of the Sudanese crisis.

In the Sudanese Communist Party, we oppose the coup and call on the Sudanese people to continue civil disobedience supported by strikes and all forms of escalation and resistance to push against the coup to find a national democratic alternative with a new political vision, and a democratic constitutional declaration that addresses the key issues, such as dissolving all militias and reforming military institutions.

[There must be] demobilization and reintegration of militants in order to form a united, professional and national army whose units are restructured and rehabilitated in accordance with a combat doctrine to protect the borders, the people and the Constitution – so that the people’s armed forces and other regular forces are under civilian command, as is the case in democratic countries.

This can only be accomplished through full civil authority that embodies the Sudanese revolution.

Secretariat of the Central Committee of the Sudanese Communist Party
November 3, 2021