After three months of contentious contract negotiations, close to 1,000 members of SEIU District 1199 WV/KY/OH Service Unit initiated a 10-day strike by walking off their jobs at Cabell-Huntington Hospital at noon November 3. CHH is in Huntington, West Virginia’s largest city. 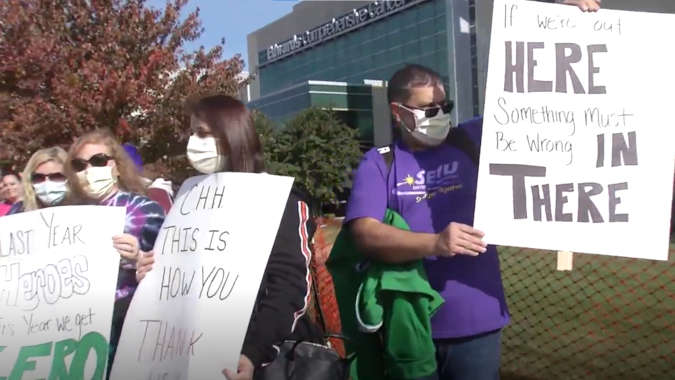 Striking members of the unit include maintenance employees, service workers, X-ray and lab technicians, custodians, cleaning staff and licensed practical nurses. Registered Nurses are also represented by SEIU District 1199, but they have a separate contract.

The contract for the Service Unit members expired Nov. 2 and the main disagreement has been over health care benefits.

Joyce Gibson, secretary-treasurer of SEIU District 1199 WV/KY/OH, publicly stated, “[The hospital] has committed multiple unfair labor practice charges and continues to harass and threaten union members….This comes after months of negotiations with the executives at CHH, who have repeatedly made it clear that they value profits over workers and patients. This conflict comes after decades of successful contract negotiations with previous hospital administrations, but clearly these executives have decided that they will be prioritizing profits over care, staffing, retention, and dignity.” (WSAZ, 11/3/21).

Workers World visited the picket line and spoke with Cole Wojdacz, the union’s communications liaison. Wojdacz informed WW: “This is the first strike of Service Unit members in 23 years. Things were calm until the 2018 merger with St. Mary’s Hospital. Workers are now at risk of losing all of the benefits they worked for and were once promised.”

Cabell-Huntington Hospital support and service workers have had a steady contract and have been represented by SEIU for over 40 years. Conditions changed in 2018 when the hospital was one of many health care facilities in the area to be taken over by the for-profit corporation Mountain Health Network.

Although the corporation is not willing to negotiate a fair contract, they are rumored to be paying line-crossers much more than what they are willing to offer their own employees. Wojdacz added, “The scabs do not know what they are doing and patients are not receiving the care they need. Trash is piling up and the rooms are not being cleaned. To make matters worse, A1 security guards have verbally assaulted picketers and management is threatening to discipline our members inside who speak with any of the strikers.”

Nurses are not on strike but they have expressed solidarity – despite risks of retaliation from management. Some workers on the inside have anonymously posted images on social media of overflowing garbage and unfilled toilet paper and paper-towel dispensers.

SEIU 1199 District WV/KY/OH is the third union to go on strike in the Huntington area since October. Workers at Special Metals in Huntington, represented by the United Steelworkers Local 40, and members of the International Association of Machinists and Aerospace Workers Local 598 in neighboring Barboursville both went on strike Oct. 1. IAMAW members at Sulzer settled, while close to 450 USW members at Special Metals are still out and strong. In all three instances, the bosses operated in bad faith by arbitrarily trying to make health care costs unaffordable for many employees.

Workers are rising up in the region. United Food and Commercial Workers Local 23D at Heaven Hill Distillery, a Kentucky bourbon company located two and a half hours west of Huntington, won a fair contract in late October, following a militant six-week strike.

All over the world workers are watching what is happening with John Deere workers who have defiantly rejected concessions in their bitter fight. The ongoing labor battles are especially important in light of the increasing rise of the far right – recently emboldened by the Virginia election results – and their racist attacks on public education and teachers unions.

These struggles are connected. One of the biggest union-busting outfits in the U.S, the American Legislative Exchange Council, is also a hefty donor behind the reactionary movement fueling the attack on “Critical Race Theory,” i.e., teaching the truth about racism and national oppression in the U.S. (Triple Pundit, July 21).

ALEC operates as a lobbyist group that promotes anti-union legislation such as “right-to-work” (for-less) laws.

The working class is starting to realize it has strength in numbers and what workers can accomplish when they take collective action. The next step is organizing workers to understand how their struggle is tied to the larger fight against the profit-driven system and its reactionary enforcers – the very system which pushed them to the picket line.