Oct. 31 — The Haitian economy lacks the fuel it needs to function. Because Haiti’s electric grid is unreliable, hospitals, factories, banks, cell phone towers, schools, taxis and the “tap taps” that provide public transport — are cutting back or shutting down. 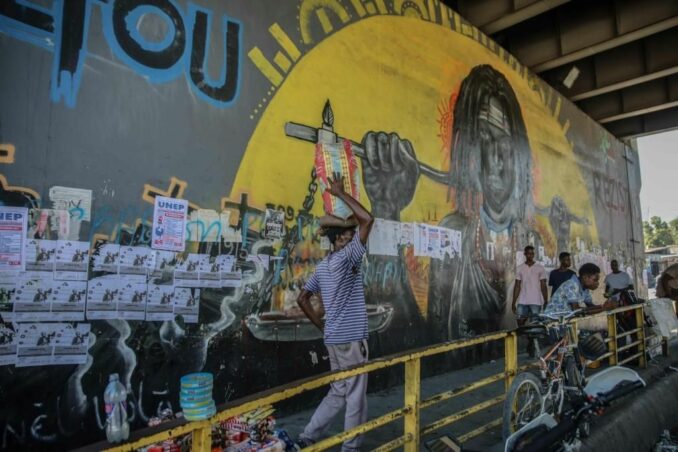 A general strike of fuel truck drivers and associated workers took place in Haiti the last week of October. Here fliers calling for the strike are plastered on a resistance mural.

Digicel, the company that runs the largest digital phone service in Haiti, announced at the end of October that they have around 25% of their cell sites off air due to the lack of fuel, which puts a couple hundred thousand customers without service.

Hospitals rely on generators to run their equipment, and they have to shut down when their generators run out of fuel. Staff — doctors, nurses and support staff — have trouble getting to work, because taxis and the privately owned small buses called “tap taps” are scarce.

Transportation difficulties have driven up the price of food. Of Haiti’s 11 million people, 4.4 million need food assistance, according to the United Nations.

The Washington Post, the New York Times as well as Le Monde and the Miami Herald have all blamed this scarcity of fuel on so-called “gangs” that are demanding payments to allow fuel trucks to pass through territory they control. They are mainly found in Port-au-Prince, yet the scarcity of fuel affects the whole country, which raises doubts about their responsibility for the fuel crisis.

These groups have a history of being paid, armed and directed by the government, politicians of all sorts and businesses. Now, however, under the pressure of events, the gangs are beginning to organize and act in a way which is no longer totally at the service of their past masters.

Frantz Duval, who is the editor in chief of the daily newspaper Le Nouvelliste, told Radio France International this weekend that the reason for fuel scarcity is that the country didn’t order enough fuel for its known needs.

Both the Miami Herald and the Washington Post have called for “foreign intervention” in Haiti, claiming that the situation was so dire that Haitians couldn’t be expected to resolve it on their own.

There are two competing proposals for elections and economic recovery being discussed. The U.S. State Department and White House publicly back both plans. Haitian analysts believe the U.S. privately prefers the proposals made by acting interim Prime Minister Ariel Henry, a politician without much popular support.

When a prosecutor was considering charging him for complicity in the assassination of Jovenel Moïse, Henry responded by firing the prosecutor.

A history of U.S. malevolent intervention

The United States has been intervening in Haiti since 1804, when President Thomas Jefferson applied this country’s first sanctions against the country of Haiti, which had just declared itself free and abolished enslavement within its borders. The early foreign aid that George Washington gave to French enslavers to put down the Haitian revolution had failed.

From the mid 1950s to 1986, the U.S. acted to support the brutal Duvalier regimes as a bulwark against the Cuban revolution. U.S. support continued even after the U.S. Air Force flew the deposed president of Haiti, Jean-Claude “Baby Doc” Duvalier, to the south of France in 1986.

Later Washington backed the two coups against Haitian President Jean Bertrand Aristide. Later still the U.S. threw its political muscle in getting Michel Martelly of the Haitian Party of Tèt Kole to become president in 2011, although Martelly had little popular support.

In a process that lasted over a year, Jovenel Moïse was maneuvered into the presidency in 2017 with firm U.S. backing. He ignored the requirements to organize parliamentary and local elections and refused to step down when his mandate expired.

When Moïse was assassinated in July, he and 10 senators were the only elected officials in the whole country, which he had been ruling by decree for months. The U.S. State Department had mildly chastised Moïse for failing to hold elections but exerted no significant pressure.

There was a general strike of fuel truck drivers and associated workers in the last week of October against the dangerous conditions the current lack of security imposes on drivers. There was no movement on the ransom demands of 17 kidnapped North American missionaries.

What Haiti really needs from U.S. workers is understanding, solidarity and a commitment to prevent further U.S. intervention.