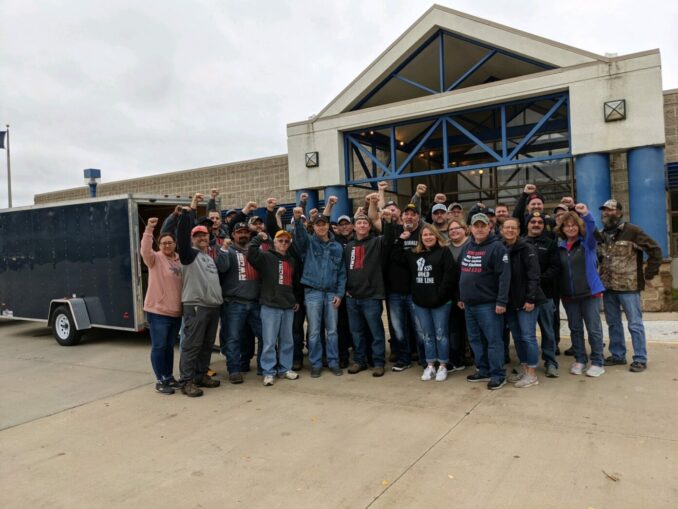 Bulletin: This article was written before the contract vote. On Nov. 2 John Deere UAW members voted down the second contract, 55% against. They remain on strike.

Members of the United Auto Workers have been on strike at 14 John Deere plants since Oct. 14. The 10,100 workers are primarily in Iowa, Illinois and Indiana, with additional locations in Georgia, Colorado and Kansas. The strike began days after 90% of the workers voted down the first contract UAW negotiators presented to them.

Now they have been asked to vote Nov. 2 on a second tentative agreement which, if passed, will end the strike. Deere workers will remain on the picket line at least until the vote is complete. If they vote down this contract, the UAW may continue the strike.

This contract offers larger pay increases than the first contract, and there are no changes to health benefits. Workers strongly objected to language that would put those hired after a certain date in an inferior pension program, and that language appears to have been withdrawn. But language already giving “post-1997” workers lower pay and lesser benefits and pensions has not been eliminated.

Under the two-tier system, lower seniority workers are paid less and have a different benefit package than “traditional” workers, even when they work side-by-side doing the same job. Unfortunately, since 2007 tiered pension plans have been in place in UAW contracts with Ford, General Motors and Stellantis (which owns Chrysler). The John Deere and Caterpillar master contracts have had two-tier systems for pay, benefits and pensions since the late 1990s, following the breaking of the Caterpillar strike.

There are a few factors that might embolden the workers to hold out for better contract terms. One is the overwhelming union and community support the strikers have garnered. This was clear during a recent tragic death of a striker killed in the line of duty — hit by a driver while leaving his shift on the picket line. Union members across the country are trying to find out how to offer financial assistance to his family.

The union won a rare victory in court, when Iowa District Court Judge Paul Scott denied a request from Deere management for an injunction limiting pickets to four per entrance and barring them altogether from one particular location. “Deere has failed to establish an invasion or threatened invasion of a right, that substantial injuries or damages will result unless an injunction is granted,” Judge Scott ruled. (weareiowa.com)

For a judge to deny an injunction limiting pickets at a strikebound company is almost unheard of. The ruling shows the capitalist courts are feeling the pressure of an increasingly militant working class, fed up with unsafe workplaces, long hours and stagnant wages in the midst of galloping inflation.

There has been an uptick in strike activity, especially in the month of “Striketober,” with workers feeling their strength as bosses struggle to find people willing to work under current terms and conditions.

Recent strikes pose a threat to both capital and conciliatory labor leaders. How the Deere strikers vote will be an important indicator of how hard workers are willing to fight to retain and win back lost gains and block further contract concessions.