Baseball — long touted as “America’s National Pastime” — has just given millions of people around the world a horrifying look at the raw settler-colonial racism on which the U.S. is founded.

This year the National League champion Atlanta “Braves” played the American League champion Houston Astros in the “World Series.” And what chauvinist arrogance is in that name — only U.S. baseball teams, with one Canadian exception, are allowed to compete!

This makes even more sickening the fact that during every game of the series played in Atlanta, the rest of the world has seen thousands of majority-white fans degrading Indigenous people by roaring a singsong “Indian war chant,” while doing a “tomahawk chop” by bending their arms in rhythmic unison. 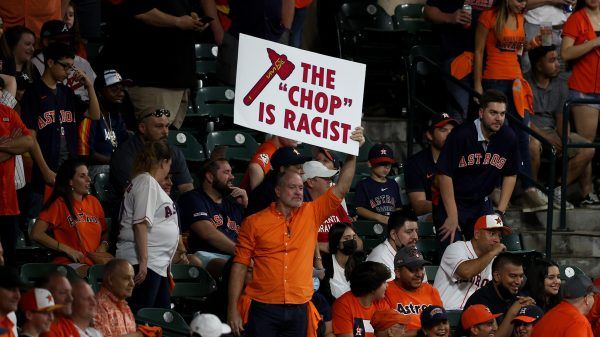 The “chop” has been a mainstay for these Atlanta baseball fans since 1991, when the team first made the national playoffs. Now the U.S. mass movement against racism has exerted so much pressure that major professional sports teams like the Washington Football Team and the Cleveland Guardians have had to rid themselves of racist names, mascots, paraphernalia and caricatures that mock Indigenous culture and life.

But the Atlanta team has dug in its heels, determined to carry on its racist tradition. The players actually still wear uniforms bearing a tomahawk logo.

Questioned about Atlanta team racism when this “World Series” began, Major League Baseball Commissioner Rob Manfred flatly denied there was a problem, giving the excuse that “some” Indigenous groups had no problem with the team.

The National Congress of American Indians immediately countered that Native American mascots and rituals such as the chop “have no place in American society.” University of Michigan psychology professor Stephanie Fryberg emphasized that this kind of racist behavior allows “people to play with another group’s identity” with no regard for the dehumanizing and deadly consequences. (Washington Post, Oct. 28)

Aaron Payment, secretary of the National Congress of American Indians, pointed out that fans attend Braves games in red face and headdresses, and opposing fans shout violent slurs based on offensive stereotypes.

Part of a history of genocide

White-supremacist violence can range far beyond the moment, reinforcing racist, reactionary policy decisions like the Trump-era decision to hand over protected Indigenous lands to energy-company exploitation.

Georgia itself — as well as the other states of the Deep South and Southwest — was originally built on Native lands stolen in order to establish plantations to grow cotton, rice and indigo and build an economy based on work done by kidnapped and enslaved African peoples.

With the 1830 Indian Removal Act, the U.S. government — reinforced by local white-settler militias founded to “fight Indians” — forcibly expelled over 60,000 members of the Cherokee, Muscogee (Creek), Seminole, Chickasaw and Choctaw nations from their ancestral homelands in what is now the U.S. South. Thousands died from exposure, starvation and sickness during the removal that came to be known as the “Trail of Tears.”

But Indigenous people fought back. The 1830s Red Stick uprising by the Creek Nation was a militant defense of the people’s communal lands and culture against the steadily encroaching economy based on enslavement.

The memory of that resistance is a searing rebuke to every white person who indulges in the mockery that is Atlanta’s “chop and chant.”

Indigenous people continue to resist. That is a reminder and a call for renewed fightback by all of us against white-supremacist exploitation.

The time is long, long past due for an accounting of U.S. war crimes against Indigenous peoples — for reparations, sovereignty and respect to be paid to the peoples whose lives, lands and cultures have been so viciously seized, attacked and exploited. The end of vile behavior at a baseball game and the abolition of racist team names and mascots is just the beginning of the thoroughgoing change that justice demands.