Excerpts from an article in Al Jazeera

Dozens of protesters and human rights activists are calling on the Pakistani government to work to end the continued imprisonment of Pakistani neuroscientist Aafia Siddiqui in the United States.

Carrying pictures and banners, the protesters gathered outside the Pakistan Consulate in New York on Wednesday to decry Siddiqui’s situation and urge the Pakistani government to actively seek her immediate release and repatriate her.

The rally was part of a series of protests organized by a coalition of more than 20 local and national human rights and religious groups, including the Council on American-Islamic Relations (CAIR).

Similar protests have been planned in Boston and Washington, D.C., in the coming weeks.

Who is Aafia Siddiqui?

Siddiqui, a U.S.-educated Pakistani national, was charged with attempting to kill U.S. soldiers and FBI agents during interrogation, after her arrest in 2008 in Afghanistan’s Ghazni province.

She was flown to the U.S. and sentenced to 86 years in prison, after a New York court found the 49-year-old mother of three guilty of attempted murder and assault in 2010.

Siddiqui earned her undergraduate degree from the Massachusetts Institute of Technology in 1995 and a doctorate in neurosciences from Brandeis University in Boston before moving back to Pakistan in 2003.

According to her family, Siddiqui and her three children were abducted by the Pakistani intelligence agencies immediately after her return.

In 2008, she appeared in Afghanistan and was detained by the Afghan police under suspicion of planning a suicide-bomb attack and being in possession of notes on how to make chemical weapons and dirty bombs, accusations denied by the family and lawyers.

Currently, she is being held at Federal Medical Center (FMC) prison in Fort Worth, Texas.

‘Victim of U.S. war on terror’

Mosaab Sadeia, a 21-year-old member of the Islamic Leadership Council of New York and one of the organizers of the New York protest, said Siddiqui is a victim of the U.S.’s so-called “war on terror” and “unjustly” imprisoned.

“She is a prisoner of conscience, a political prisoner and victim of the U.S. war on terror. We are here to tell the Pakistani government to stand up for its citizen and secure her freedom,” Sadeia told Al Jazeera.

Author and antiwar activist Sara Flounders has followed Siddiqui’s case for more than a decade and believes she is innocent.

“She is a victim of secret rendition. I attended her court trial. It was just a show trial and a theater of war on terror,” Flounders told Al Jazeera over the telephone.

“The U.S. government should immediately free her and reunite her with her children.”

The protesters accused the prison officials of treating Siddiqui inhumanely. In July, she was attacked by a fellow inmate with a mug of hot liquid and later locked in solitary confinement.

‘Daughter of the Nation’

In Pakistan, Siddiqui’s case has attracted enormous support from across the political divide.

In 2018, the Pakistani Senate unanimously passed a resolution dubbing her “Daughter of the Nation.” On several occasions, Pakistani Prime Minister Imran Khan has extended his support for negotiating Siddiqui’s release with the U.S. government.

In July 2019, after meeting with the then U.S. President Donald Trump, Khan told the media that releasing Shakeel Afridi in exchange for Siddiqui could be a possibility in the future.

Afridi is a Pakistani surgeon allegedly recruited by the CIA to track and trace Osama bin Laden, eventually leading to bin Laden’s killing.

In 2012, Afridi was sentenced to 33 years in prison under a colonial-era treason law by a Pakistani court. His appeal is still pending before a high court in Peshawar.

Maliha Shahid, spokesperson for the Pakistani embassy in Washington, said Siddiqui’s case is still a priority for the government.

Growing support for release in the U.S.

Over the past few months, calls in the U.S. for release and repatriation of Siddiqui have become more intense.

Last month, the Boston chapter of United Steelworkers, a labor union, passed a resolution calling on the U.S. government to free Siddiqui and allow the visit of independent medical practitioners from Doctors Without Borders to evaluate her mental and physical injuries.

“This is one of the most egregious and outrageous cases that shows the U.S. government’s violation of human rights and international law. We can’t go anywhere on the globe and kidnap anyone,” Stevan Kirschbaum, the vice president of the union, told Al Jazeera. 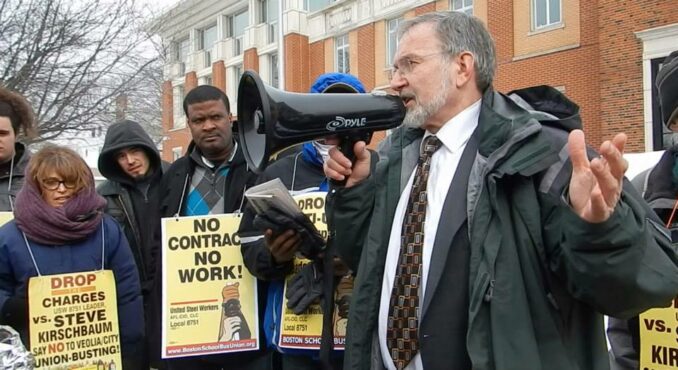 Steve Kirschbaum speaking outside the court room where he was just acquitted March 5, 2015.

“Our resolution aims to highlight and bring the case of injustice done to Aafia Siddiqui to living rooms across the U.S.,” he added.