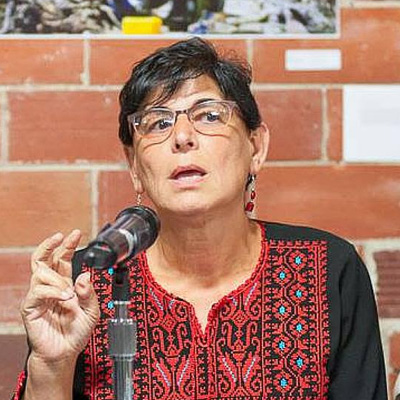 Dr. Rabab Abdulhadi, an associate professor at San Francisco State University, and Dr. Tomomi Kinukawa had scheduled an online open class to be held Sept. 23, 2020, featuring Palestinian hero Leila Khaled. But tech giants Zoom, Facebook and Google-owned YouTube caved in to Zionist pressure and shut it down just as it got started.

Abdulhadi is an internationally known Palestinian scholar and founding director of the Arab and Muslim Ethnicities and Diasporas (AMED) Studies program at SFSU and a member of the Department of Ethnic Studies. Kinukawa is a lecturer in the university’s Department of Women and Gender Studies.

The open class was entitled “Whose Narratives? Gender, Justice and Resistance: a Conversation with Leila Khaled.” The program was to include panelists Rula Abu Dahou, acting director of the Institute For Women’s Studies at Birzeit University in Palestine’s West Bank, and Ronnie Kasrils, member of the South African Communist Party, the African National Congress and a founder of the ANC’s armed struggle formation Umkhonto we Sizwe.

Other scheduled speakers were Sekou Odinga, member of the Black Panther Party, the Black Liberation Army and a former 30-year political prisoner, and Laura Whitehorn, a civil rights and antiwar activist who served 14 years in federal prison. Kasrils and Whitehorn are Jewish.

Leila Khaled is an icon of the Palestinian struggle. She was born in Haifa and is a refugee. She is a member of the Popular Front for the Liberation of Palestine. Zoom representatives said her participation was the reason the company shut down the class. The tech giant’s action was an attack on academic freedom, the Palestinian community and anti-Zionist Jews.

Israeli lobbying groups and Zionist organizations have attacked Abdulhadi and the AMED program for years both on- and off-campus.These groups include the Anti-Defamation League, Lawfare Project, StandWithUs and Act.IL, an app funded by the Israeli government.

But Abdulhadi not only mobilized local, national and international community support for the online program, she submitted a formal grievance through an internal SFSU procedure.

On Oct. 14, a panel of three SFSU faculty members upheld the grievance. It ordered the university to issue a public apology to Abdulhadi for not upholding academic freedom and said the school must provide a site for rescheduling the event on an alternate platform without interference.

The panelists asserted that SFSU had not only not defended Abdulhadi and Kinukawa against threats of arrest made by the Lawfare Project if the class went forward, and stressed that the university amplified the threats.

Abdulhadi commented on the panel’s findings: “This is a huge victory not only for us, but for everybody speaking about Palestine and for our ability to teach about Palestine as part of the indivisibility of justice. After the pain and the anguish for over a year that we have suffered, by being vilified by character assassinations, by being chased by Zionists, by the hate mail, by all the nastiness that has happened, by the fact that the university did not have our backs, we were vindicated.”

However, Abdulhadi stressed, “the good news is that we have a huge movement of everybody coming together within San Francisco State, within California, within the U.S., internationally. We’re fighting for justice and for Palestine, and we see it as part of justice for all.” (Electronic Intifada, Oct. 15)

Michael Kramer served in the Israeli Defense Forces and took part in the criminal occupation of Palestine, Syria and Egypt. In the late 1970s, Dr. Abdulhadi encouraged him to speak out as a supporter of the struggle to liberate all of Palestine from Zionist occupation. And he has done just that for decades.