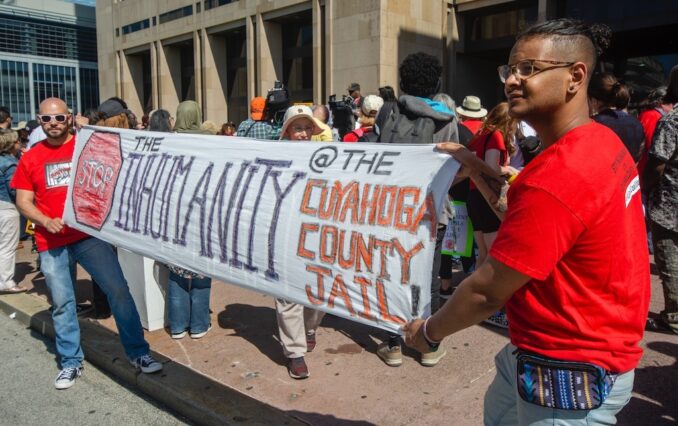 One of many protests outside the Cuyahoga County Jail against terrible conditions.

Former Cuyahoga County Jail Director Ken Mills was sentenced to nine months in prison Oct. 8, after a three-week trial where he was found guilty of two counts each of dereliction of duty and falsification. That is just over one month for each death of an incarcerated person between May and November 2018 under Mills’ watch. He resigned after the eight deaths and shortly before U.S. federal marshals released a scathing report on conditions in the jail.

Judge Patricia Cosgrove accused Mills of creating “inhumane” and “horrific” conditions, saying: “I don’t know how you can live with yourself or look at yourself in the mirror.” (Cleveland Plain Dealer, Oct. 9) He withheld food, running water and medical care, neglected basic sanitation and caused major overcrowding that meant prisoners slept on cafeteria floors or in areas without working toilets. Even after the jail population was beyond capacity, Mills blocked the hiring of additional nurses.

During the sentencing, the courtroom was packed with formerly incarcerated people and family members of those who died in the jail from suicide, drug overdose and denial of medical care.

When Mills was hired in 2015 by County Executive Armond Budish, he had never worked in a jail. Budish, who oversees county operations including the jail, is partially responsible for the deplorable conditions, which he allowed to go unchecked. Many have still not been corrected. There have been five more deaths since Mills resigned, but no charges have been filed against Budish.

In an Oct. 10 statement, Lu Zucker of the Cleveland Jail Coalition said: “No individual in the county government is wholly responsible for the abuse and deaths inside the jail. Mills stepped down almost three years ago, and community members locked in the jail continue to be denied emergency medical care, continue to be tortured and raped, continue to be denied water and adequate food, and continue to die. These are systemic issues that cause human rights violations, and these issues lie within the very structure of the U.S. criminal justice system.” The Coalition was formed in 2018 in response to the outrageous number of jail deaths that year.