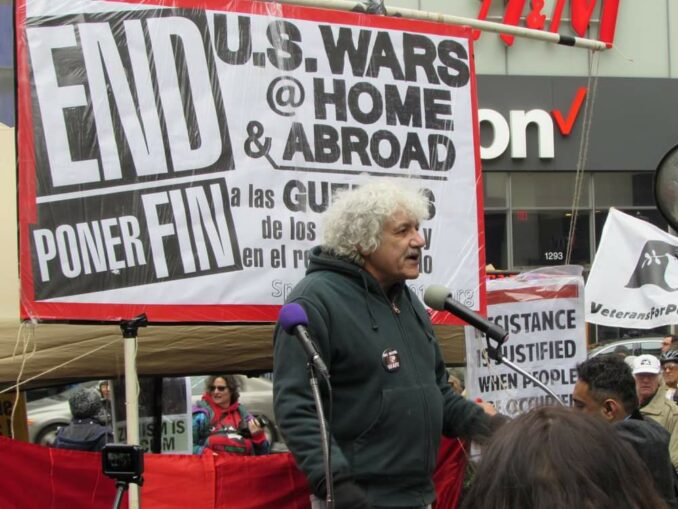 Antiwar Activist Joe Lombardo is a consistent, unequivocal and vocal opponent of all forms of U.S. imperialism.

The following is a lightly edited statement from the Committee to Stop FBI Repression issued Oct. 2.

On the heels of its defeat in Afghanistan, the U.S. government has made it clear it is once again setting its sights on antiwar activists. Their latest target is Joe Lombardo, a leader of the country’s largest anti-imperialist coalition.

Joe Lombardo, 73, has been an organizer in the antiwar movement for decades. He is a co-founder and lead organizer for Bethlehem Neighbors for Peace, a local antiwar group based near Albany, N.Y. Lombardo also serves on the administrative committee for the country’s largest and most active coalition of anti-intervention organizations, the United National Antiwar Coalition (UNAC).

UNAC and its member organizations are consistent in their unequivocal and vocal opposition to all forms of U.S. imperialism, from criminal sanctions and embargoes, to illegal coups and military interventions.

As one of the coalitions’ main leaders, Joe has helped to coordinate conferences, mass mobilizations and webinars around the issues of peace and justice at home and abroad for UNAC. In his many years as an activist, he has traveled to countries throughout the world as an ambassador for peace and human rights.

Last week, federal agents once again made their move against the antiwar movement. Out of the blue, the FBI called Joe’s former spouse for questioning. The agents pressed her to answer questions over the phone and to meet in person to discuss Joe’s past activities and travels. They specifically asked about Joe’s 2019 trip to Venezuela, which he took as part of a U.S. Peace Delegation.

The feds rely on the fact that the average person is caught off guard and gets very nervous when FBI agents come knocking with demands for information. Luckily, Lombardo’s former spouse knew to reach out to him and to a movement lawyer and made the correct decision not to meet or speak with the FBI about Joe.

All those active in the movements for peace and justice should use this moment as a reminder to never speak with agents of the federal government prying into your political activism or the activism of others. “I have nothing to say. Please speak with my lawyer,” are all that needs to be said.

Activists should take the time to educate friends and family members on this subject as well. Although not necessary, having the name of a movement or civil liberties lawyer on hand could help people feel less nervous in such a situation.

All this begs the question: Why is the federal government once again going after antiwar activists? The powers that be, Democrat or Republican, feel threatened by the influence and power of our people’s movements and will use any opportunity to try to criminalize, silence or destroy them. An attack on one is certainly an attack on all. Solidarity is always the order of the day.

The Committee to Stop FBI Repression (CSFR) stands in unwavering support of our brother in the movement, Joe Lombardo. We oppose all efforts by the U.S. government to target activists in any progressive movement in this country. We call for an end to investigations, political harassment and threats against activists and our movements.