A diverse crowd gathered on Decatur Square on Indigenous Peoples Day on Oct. 11, to honor the Muscogee Creek nation whose land this had been before settler colonialism. Organizers determined that banishing the “Indian Wars” cannon from its place of prominence in the public space would be a step toward changing the narrative of white supremacy. 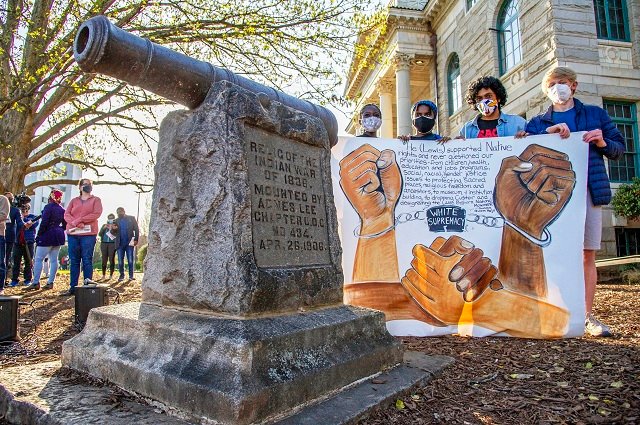 Last year, a grassroots movement, led in part by the Beacon Hill Black Alliance for Human Rights, brought about the successful removal of the “Lost Cause” monument, a towering obelisk placed directly at the courthouse entrance in 1908.  The United Daughters of the Confederacy gifted both of these symbols of racism and violence that stood protected for over 110 years.

On the eve of Juneteenth, 2020, however, the Confederate monument came down to the cheers of hundreds.

Carrying a basket with almost 2000 cards with individual’s names who demand the removal of the genocide cannon, the chanting group marched to the DeKalb

County Commission Building where a resolution to remove the war relic is scheduled for a vote on Oct. 12.

Demonstrators declared a victory on Oct. 12, when the County Commission unanimously voted to remove the cannon.  Another brick down in the wall of white supremacy in response to the power of the people!