Scoring a victory for hospitality and service workers countrywide, on Sept. 23, UNITE HERE Local 26 at Harvard University beat back management and won job security for its members. A five-year contract was negotiated, and workers voted for it overwhelmingly. Local 26 represents dining hall workers who prepare the food and feed the students. 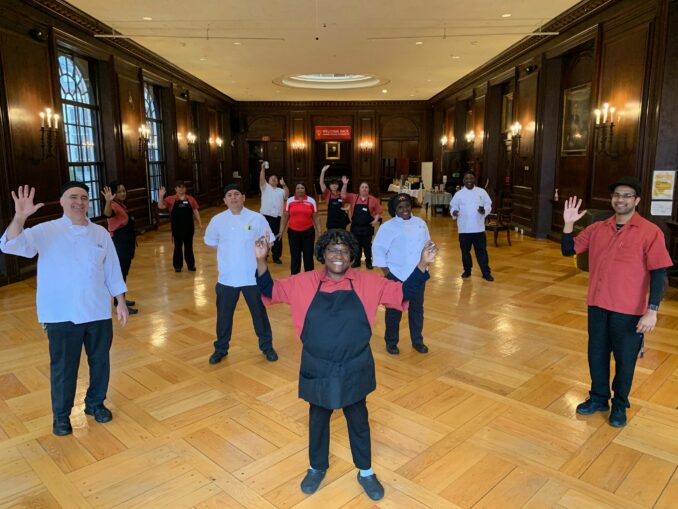 Five years ago, Harvard management went on the attack with big cutbacks, including eliminating affordable health care. But after a three-week strike, the workers were able to thwart the attack and halt the bosses’ offensive.

What Harvard proposed this time was a huge attack — cutting full-time workers, who are currently 70% of the workforce, to 40%. On top of that, management wanted to cut 30 to 40 jobs. This would be devastating for the 500 workers who work for Harvard and the 250 who work for outside contractors, all of whom are covered by the same contract.

Harvard is trying to implement the Amazon model of worker exploitation. Amazon’s strategy is to try to keep 10% of the workforce stable, but work the other 90% to the bone and squeeze as much work out of them as possible, which results in 90% of the workforce not lasting more than a year. Amazon does that through automation and speedup.

Management at Harvard is trying to bring that model into the dining halls, by bringing in prepared foods and working people until they drop, not caring about having a stable workforce. They are also doing this to the custodians particularly and somewhat to the clerical and graduate student workers.

The main issue was job security. Our main goal was to stop the cuts in hours and stop the elimination of any jobs. It was important to keep everybody at their living standard and to stop work overload. Another big issue was to extend this to workers employed by outside contractors. We demanded that if their workers were laid off, they would have to be allowed into the HU workforce. For nine months these issues alone were being negotiated by management and UNITE HERE Local 26.

Preparing for the fightback

Harvard management informed Local 26 of their vicious plans at the beginning of negotiations a year ago. They tried to use the pandemic to beat the union down, aware that UNITE HERE was vulnerable with 80%-90% layoffs at hotels. Many workers were suffering either from layoffs or anxiety about getting their jobs back due to the pandemic.

Workers from different unions rally to demand Harvard management take on all laid-off Harvard workers, whether employed by Harvard or outside contractors. Credit: Gary Davis

Local 26 leaders and workers at Harvard prepared for this extended struggle by forming a coalition with the other unions on campus, particularly SEIU 32 BJ, representing the custodians and guards; Harvard Union of Clerical and Technical Workers, AFSCME 3650; and the Harvard Grad Students Union, UAW Local 5118. Leaders met; workers rallied together, and joint positions were put out to the press and management. UNITE HERE dining hall workers prepared over the pandemic with walkouts and walk-ins (work stoppages), demanding PPE and safety on the job.

Local 32 BJ held a walk-in, and the other two unions carried out actions to prepare to fight attacks by management during the pandemic and get ready for negotiations.

UNITE HERE Harvard workers formed a contract committee of over 30 workers to negotiate the collective bargaining agreement; all negotiations were open to all members. Management wanted to hold negotiations by Zoom, but the union demanded face-to-face meetings.

For one year, union staff and dining hall leaders organized their members, discussing the issues and preparing for a possible strike. Management threatened to cut hours and jobs and tried to play off one section of workers against another, using the fear caused by the pandemic to lay off workers in certain departments.

Battling all this, the leaders and staff instilled in the workers the need to be strong and unified. With discussion groups in dining halls, the walk-ins and walkouts, and especially unifying with custodians, clerical workers and students, workers saw their strength and management’s weakness. Help from the hotel workers — who are in desperate need because of 70% unemployment — lifted the workers into a strong fighting force that management had to contend with.

Management saw strikes happening all over the country, including the nurses strike at St. Vincent’s Hospital in Worcester, Mass. The Harvard Grad Student Union took a strike authorization vote with over 90% in favor during this time. Eight new shop stewards were developed as leaders during this period of struggle.

After nine months of negotiations, as Local 26 prepared to strike, HU management started to capitulate. They saw the need to sign with the dining hall workers, the strongest force on campus by far.

“When Harvard says cut back, we say fight back!”

There was no talk at the negotiating table about wages and stipends until job security was won first. If a union is weak and not prepared, it may let management offer wage proposals and try to sucker workers into accepting an otherwise bad contract. Local 26 doesn’t deal with money until the very end. Management does not take us seriously unless wages are put last.

In this five-year agreement, there will be no cuts in anyone’s hours as of Dec. 1, 2020 — when Harvard started instituting cuts. All jobs stay. All laid-off workers from outside contractors will be brought into the Harvard workforce according to their seniority working at Harvard. Recognition of the seniority of all workers under the contract, regardless of which employer pays them, is an unprecedented victory.

Both union members and management understood the strength of the workers’ struggle, and in one day they agreed to a wage increase. No matter what their job position may be, everyone gets $4.03 an hour more over five years. This purposely shows solidarity with lower-paid workers.

The workers won a health care package that continues with no deductibles, no fees and no co-pays. Unprecedented also!

People who work for educational institutions cannot collect unemployment benefits during traditional break periods; the contract stipulates that by the end of the contract, workers will get $3,800 per month of seasonal lay-off pay in lieu of unemployment.

The contract was overwhelmingly supported by the membership, knowing that their preparation and willingness to fight beat back a vicious attempt to attack their living standard.

Now the struggle continues to support the other unions on campus against similar attacks by Harvard management.

As the saying goes, “The workers united will never be defeated!”