The 78th birthday of political prisoner Imam Jamil Al-Amin (formerly known as the Black militant activist, H. Rap Brown) was commemorated by a rally and delivery of 78,000 signatures on petitions calling for his freedom to the Fulton County District Attorney’s office in Atlanta, Oct. 4. 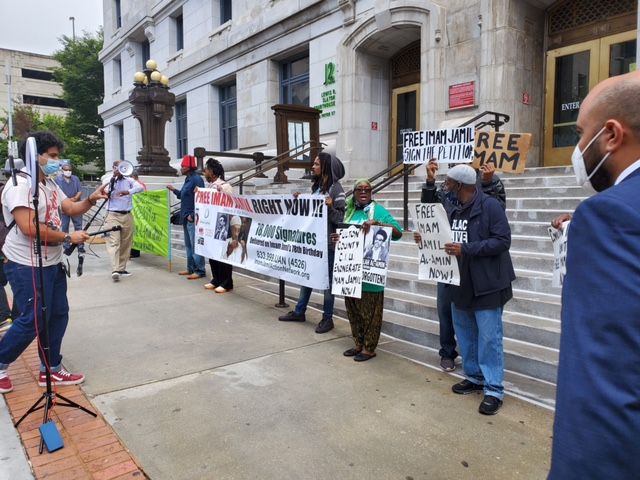 As chair of the Student Nonviolent Coordinating Committee (SNCC), Brown and the organization’s members were in the forefront of the historic voting rights struggle in rural areas of the South. This period of the 1960s and ’70s was marked by racist violence against Civil Rights activists, including beatings, bombings and murders by the Ku Klux Klan and other white supremacists. Alarmed by his charismatic personality and persuasive speaking style, local, state and national governments spied on, harassed and instigated violence against Brown.

Brown later converted to Islam while imprisoned in New York state, taking the name Jamil Abdullah al-Amin. He returned to Atlanta and established a mosque and community grocery store in the West End, a neighborhood suffering from institutional neglect, poverty and drugs. Al-Amin is largely credited with building community empowerment to reclaim the area from crime and disrepair.

On the night of March 16, 2000, two Fulton County deputies got into a firefight in the West End with a man described as 5 feet, 8 inches to 5 feet, 10 inches tall with “cold grey eyes.” This resulted in the death of one deputy, the wounding of the second and the alleged wounding of the shooter.

Brown-eyed, 6 feet, 5 inches tall, and unwounded, Imam Jamil was charged and later convicted in a 2002 trial fraught with prosecutorial misconduct and lack of physical evidence. It was riddled with state and media bias based on decades of government surveillance, slander and misinformation. Fearing his influence, in 2007 the state of Georgia took the unprecedented step to have him transferred into the hands of the federal government’s prison system.

During Al-Amin’s over 20 years in prison, he has endured extended periods of solitary confinement, extreme medical neglect, and a virtual gag order preventing him from speaking to the press.

As with the many other political prisoners from that period of heightened political struggle and repression, there have been persistent campaigns to gain freedom for Imam Jamil Al-Amin. The Imam Jamil Action Network (IJAN) initiated the Oct. 4 rally and delegation visit to District Attorney Fani Willis’ office. A Conviction Integrity Unit has been set up to review past convictions to rectify unfair or improper convictions, and Imam Jamil’s case is one of them.

More than 15 representatives of local and national organizations including CAIR (Council on American Islamic Relations), ICNA (Islamic Council of North America), Justice for Georgia, Workers World Party, Moorish Science Temple of America, First Iconium Baptist Church and others addressed the DA’s staff. They spoke of Imam Jamil’s major contributions as a young activist to win voting rights; his achievement of bringing peace to the West End; the decades of harassment, threats and surveillance as a target of the FBI’s COINTEL program; and the sham of a trial that would not allow the testimony of a man, fitting the description, who has repeatedly admitted to being the shooter. Each statement ended with the demand to Free Imam Jamil Al-Amin NOW!

For additional information, see IJAN and What Happened 2 Rap on social media.