This editorial, which originally appeared Oct. 19, 2017, in Workers World, has been updated to reflect Indigenous struggles in 2021.

Workers World Party is in firm solidarity with Indigenous peoples in the struggle to abolish the current “Columbus Day” as a national U.S. holiday and to rename and transform it into “Indigenous Peoples’ Day.” 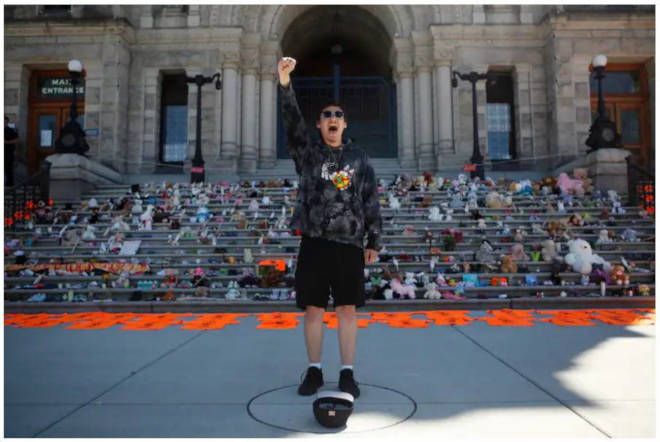 Organizing by Indigenous peoples, who steadfastly refuse to mark genocide as a holiday, has already resulted in six states and 130 cities and towns making the progressive change in the U.S.

Genocide is not an exaggeration. Indigenous peoples have waged centuries of struggle to survive and advance against the death-dealing tide of settler-colonialism in the U.S.

The most recent confirmation of the terrible war waged against Indigenous peoples is seen in the 2021 exposure of the forced acculturation, starvation and murder of many thouands of Indigenous children in schools run by U.S. states and Canadian provinces and by various religious groups. (See Workers World, July 1.)

The move to rename the holiday is an attempt to correct official history as told by invaders and colonizers.

The 1492 “voyage of discovery” by Columbus, which every U.S. schoolchild is taught, was in fact a voyage of conquest by Christian Europeans. That conquest was officially blessed by the highest religious authority. In 1493, Pope Alexander VI issued a papal bull giving the spiritual, political and legal justification for seizing any land not inhabited by Christians. The fact that there were Indigenous peoples living on that land was known by the authors of this document, deliberately crafted to justify colonization.

The “new world” of European conquest was established on the basis of genocide, land theft and brutal injustice to Indigenous peoples. And eventually, all over the U.S., statues went up to honor the symbolic initiator of this bloodshed.

Though some may argue naively, or with deliberate racism, that Columbus Day merely honors Italian cultural heritage, progressive people of Italian descent have been making it clear that they unite in solidarity with Indigenous peoples to fight white supremacy.

Sharp historical memory underlines this support, because 19th and early 20th century Italians who immigrated to the U.S. faced virulent racism. This racism was especially aimed at those from southern Italy and Sicily linked to African lineage. In fact, in 1891, 11 Italian men were openly lynched in New Orleans.

But in 1892, when U.S. President Benjamin Harrison called for the U.S. to mark Oct. 12 as the “discovery of America by Columbus,” in part because of “the divine care and guidance which has directed our history,” he was not taking a stand against xenophobia, white supremacy or colonization. (Common Dreams, Oct. 11)

Instead, that call was the sign of a new deal emerging in the U.S. and offered to “ethnic immigrants” — who might be Slavic or Italian or other groups vilified as of color.

The deal? Accept and go along with white supremacy and become “white” — or face the genocide, violence and discrimination visited on peoples who were Indigenous or of African descent.

But millions of people have said NO to that deal — choosing instead to organize and struggle against racism.

This coming year gives another chance to progressive people to say “No to white supremacy! Down with statues of Columbus and all memorials to racism and colonization! Up with banners of Indigenous Peoples’ Day!”