The following article was published Oct. 2 on the website of Vermelho, news magazine of the Communist Party of Brazil (PCdoB), with sources from the Brasil de Fato news agency. Translation: John Catalinotto

The sixth round of events of the #ForaBolsonaro (Out with Bolsonaro) National Campaign shook the country Saturday, Oct. 2. There were demonstrations in 304 Brazilian cities and protests in 18 other countries. About 700,000 people participated in the Oct. 2 actions supporting the impeachment of [ultrarightist] President Jair Bolsonaro. 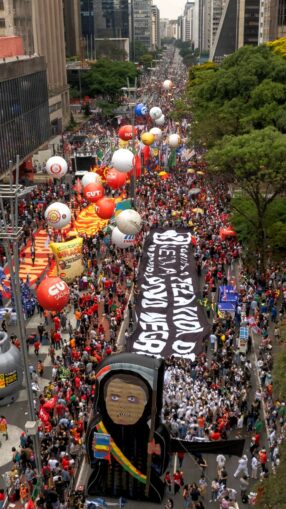 The event in Belo Horizonte (Minas Gerais state) was the largest of this series against Bolsonaro, mobilizing 30,000 people. The assembly took place in Praça da Liberdade [Liberty Square], from where the demonstrators marched to Praça Sete.

In Porto Alegre (Rio Grande do Sul state), around 80,000 demonstrators went to Largo Glênio Peres, in the historic center, to demand Bolsonaro’s impeachment. They marched to Largo Zumbi dos Palmares, in the Lower City.

In Rio de Janeiro, demonstrators filled the Democratic Palco, in front of the Candelaria Church. Representative Jandira Feghalli drew applause as she defended the efforts taken against COVID-19 at the protest. “It’s good that the press shows everyone wearing masks; it’s good that it shows that this here is a demonstration that defends life,” said Jandira. A march against Bolsonaro, called Caminhada Pela Vida (Walk for Life), went through the central region, ending at Cinelândia.

In Recife (Pernambuco state), a demonstrator was run over during the #ForaBolsonaro demonstration. She was on the committee that provided for dialogue between the drivers and the demonstrators. A driver, who wanted to break the blockade, started the disturbance. The driver even pulled out a gun while the victim was asking for calm.

The victim sustained several injuries, including to her head, but was rescued on the spot and taken to the Real Hospital Português. Despite the shock, 50,000 people participated in the demonstration in the capital of Pernambuco.

The actions also supported the Parliamentary Inquiry Commission for COVID-19, which is in its final stage in the Senate. João Pedro Stedile, MST coordinator, said that the broad representation from today’s demonstrations will provide support to the report that will be presented by Senator Renan Calheiros (Movimento Democrático Brasileiro/MDB-Alagoas) with the conclusions and directions of the commission.

The desire, the will for #ForaBolsonaro remains present, increasingly, in broad sectors of society,” the #ForaBolsonaro National Campaign said in a statement. “This October 2 demonstrated that, beyond the struggle for the impeachment of the president now, there is a growing outrage among the Brazilian people regarding unemployment and the increase in hunger and misery.”