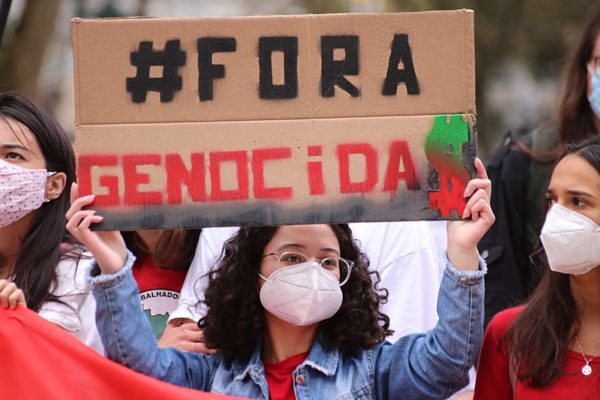 ‘Out with Bolsonaro,’ Brazil actions set for Oct. 2.

Dozens of worker confederations, along with other organizations joined in fronts (Brasil Popular, People without Fear and Out with Bolsonaro), and political parties have called for national protests in Brazil for Oct. 2 against the ultraright and well-hated President Jair Bolsonaro. Source, MST, Brazil. Below is the appeal:

CUT, Força Sindical, UGT, CTB, NCST, CSB, CSP-Conlutas, Interunion and Public, in a single voice, call all the working class to the Out with Bolsonaro actions on Oct. 2 in all the states of Brazil and also in other countries.

Let us take to the streets in protest against the chaos that the mythomaniac Jair Bolsonaro represents for the country: record unemployment, hunger, famine, inflation, corruption, stripping of rights, dismantling of public and state services, attacks on democracy, sovereignty and freedoms, the trampling of science and contempt for life.

Every day that Bolsonaro wakes up as president of the Republic, Brazil sinks, loses and is lost to the world, remaining a pariah tied to the spiral of crises (health, political, economic, institutional and diplomatic) generated by the incompetence and personal power project of Bolsonaro and his inept government team.

In a country of 212 million inhabitants, whose majority, according to all polls, rejects and disapproves of Bolsonaro, it is urgent that the National Congress listens to the popular clamor and agrees to the opening of an impeachment trial, so that Bolsonaro is impeached and his crimes investigated and tried. There are already more than 130 requests filed in the presidency of the Chamber of Deputies, while the country sinks in the presidential mud.

We must listen to the voice of the streets

And we will be those voices on Oct. 2 and on every date to come, until Bolsonaro is brought to trial for the crimes he committed and commits daily against Brazilians, until he answers for the genocide he committed. He took the lives of almost 600,000 people in the COVID-19 pandemic, because of the unemployment that has reached 100 million people and the despair that causes misery and hunger.

The Trade Union Centrals will take to the streets on Oct. 2, together with more than 80 organizations represented by Popular Fronts of Brazil, People Without Fear, the National Out With Bolsonaro Front and political parties. All grassroots entities and unions, throughout the country, are calling for protest actions in the streets, squares, as well as assemblies and leafleting at workplaces and public transport terminals. We will do it safely and respect the sanitary protocols, use of masks and alcoholic gel.

We will not withdraw from the streets until Brazil is freed from this criminal president.

Intersyndical Coordination, Emanuel Melato — Instrument of Struggle and Organization of the Working Class